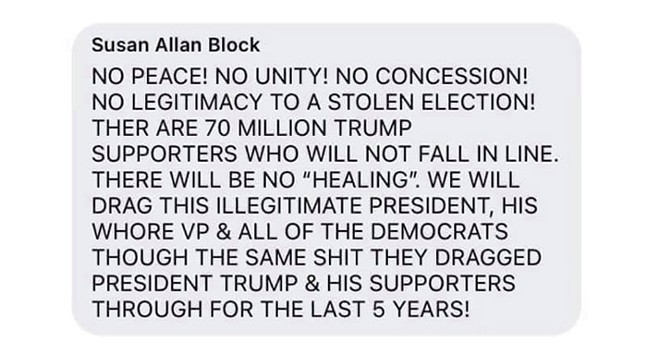 Screenshot taken from Facebook
Susan Allan Block's social media post in response to criticism of the Capitol insurrection
A day after Trump supporters pushed and struck local police, allegedly with lead pipes, broke windows, and occupied the U.S. Capitol offices and chambers, journalists at the Pittsburgh Post-Gazette and Toledo Blade are calling out their ownership group Block Communications and its family, alleging their politics are playing a part in recent news coverage of the events.

According to a press release from the Toledo and Pittsburgh NewsGuilds unions, which represent journalist at both papers, Blade Executive Editor Kurt Franck issued an edict to all Blade web staff, saying they could not refer to those rioting in Washington as “Trump supporters,” despite the event being Donald Trump-branded, and an event the president encouraged.

The release points out that John Block, the publisher of the Post-Gazette and vice president at BCI, has a history of conservative politics and outright support for Trump. Both papers endorsed Trump in 2020.

“There was a systemic effort by management at The Blade to downplay the forces at work yesterday for political purposes,” tweeted Blade journalist and Toledo Newspaper Guild president Nolan Rosenkrans, claiming that parts of stories were changed to remove references to Trump, and orders were given to not refer to Trump supporters as rioters.

Liz Skalka, a politics reporter at the Blade, tweeted today that Blade editors changed wire stories and added a qualifier to say that it was "mostly" Trump supporters who incited violence and chaos.


I'm not sure how editors in Toledo and Pittsburgh were able to determine better than reporters on the ground who the actors were yesterday in DC. I'm sad and disappointed — but not surprised. (If you're unfamiliar with our publishers, I'll let you Google.)

She also said they changed a local reaction story she wrote to also add in “mostly.” She asked editors to remove her byline from the story if the use of "mostly" was non-negotiable. Her byline was removed.

“I'm not sure how editors in Toledo and Pittsburgh were able to determine better than reporters on the ground who the actors were yesterday in DC. I'm sad and disappointed — but not surprised,” she wrote on Twitter.

In June 2020, Post-Gazette management removed two stories from its website that were shared earlier in that day about topics related to Black Lives Matter protests and police-reform legislation. Bylines were removed, the stories were rewritten, and the lead and main photos were changed.


Just a reminder that Pittsburgh Post-Gazette editors/owners thought it was a journalistically sound decision to completely delete my story (and my colleague's story) on June 5. No one ever spoke to me about it. Two articles disappeared from the web that night. https://t.co/YEVOcxjVTo

The guilds' presser also highlights that the politics of the Blocks goes beyond just John Robinson. Susan Allan Block, the wife of Allan Block, who owns Block Communications Inc. with his brother John Robinson, posted on social media today in support of the insurrection carried out by Trump supporters.

On Facebook, she wrote in all caps, “NO PEACE! NO UNITY! NO CONCESSION! NO LEGITIMACY TO A STOLEN ELECTION! THER [sic] ARE 70 MILLION TRUMP SUPPORTERS WHO WILL NOT FALL IN LINE.”

A woman was shot and killed by police as she attempted to enter the Capitol on Jan. 6, and at least one improvised explosive device was found on the Capitol grounds. Three others died of due to medical emergence during the riot, according to police. One man who died was from Pennsylvania.


Checking in on how the family that owns The Blade and Pittsburgh Post Gazette is handling yesterday's coup attempt and OH MY GOD. pic.twitter.com/pThX0tVxWI

This comment written by Block was a response to a post by someone in the Toledo-area who was expressing disgust at the Capitol insurrections. The Facebook comment has since been deleted and Block’s page has been taken down.

Another social media post by Block was made yesterday afternoon, just as the news of the insurrection was breaking. Block wrote in a tweet in all caps, “THIS ELECTION WAS A TOTAL FRAUD!! NO PEACE! NO UNITY! NO LEGITIMACY!! THE BIDEN CRIME FAMILY IS IN CHINA’S POCKET!!,” parroting right-wing conspiracy theories that Biden is tied to the Chinese government.

Block Communications Inc. owns and operates the Pittsburgh Post-Gazette, the Toledo Blade, and several radio and TV stations. Susan Block used to be on the board of BCI, but spokesperson Allison Latcheran says that Susan Block is no longer on the board.

Several journalists at the Post-Gazette and the Blade have criticized Block’s posts on social media.

BCI spokesperson Latcheran says that "Social media posts by Susan Block represent her individual views as a private citizen; she has a first amendment right to freedom of speech and her opinions" and that Susan Block's "views do not represent those of Block Communications, Inc. or any of its affiliates."

"Susan Block is not an employee, shareholder, or Director of Block Communications, Inc. or any of its affiliates," says Latcheran.

Request for comment to the Blade were not returned by press time.

Though, Susan Block is no longer a board member of Block Communications, she is still listed as a board member of the Ohio Arts Council, a state agency that funds and supports quality arts experiences throughout Ohio. Block was appointed by Ohio Gov. Mike DeWine in September 2019.

Earlier that year in April 2019, Block shared anti-Muslim conspiracy theories on social media about the Notre Dame cathedral fire in Paris. In a Facebook post that shared doctored images of two Middle Eastern men in front of the fire, Block wrote, "Even if it was on purpose we will never be told that! Can you imagine what the French response would be to that! Uncontrollably! Total chaos! We will never know!”