"One day I woke up to an email from Major League Baseball and they were seeking damages." 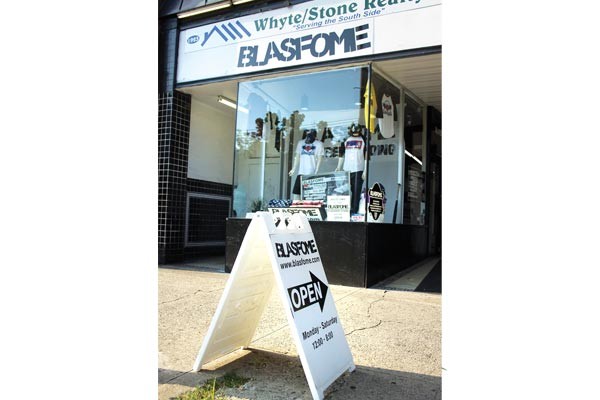 Blasfome is a clothing store, sure — but it's also a part of local hip-hop culture.

"From the moment we opened, we've been a meeting place for artists, DJs and fans," says Sarah Wilderman, the shop's marketing director.

Dave Bartek, of Peters, founded Blasfome as an online store in 2007. In May 2011, he developed it into a Carson Street storefront that's quickly become a hub for the hip-hop scene.

"We do a lot of back-end support for Beedie, the 58s, Dos Noun, Ray Dawn, and a few other people," Bartek says. "We do a little bit of artist development, such as talking about how to monetize the stuff they're putting out and how they can develop their brand."

Now established locally, and with aspirations of growth, the folks at Blasfome have aligned themselves with several artists outside of Pittsburgh, such as Los Angeles duo King Fantastic and Brooklyn's Mr. MFN Exquire. This initiative has helped gain further recognition for the Blasfome brand, while introducing and promoting the Blasfome-supported artists to the Pittsburgh market. National collaborations could include photo shoots, video shoots or blog coverage, under the Blasfome brand. There is also a performance stage inside the store.

Most of Blasfome's original designs are T-shirt lines. Some controversy arose in 2010 when Wiz Khalifa sported Blasfome's original "Somalia Pirates" shirt in his "Damn It Feels Good to Be a Taylor" music video; the design mimics the Pittsburgh Pirates logo, but makes reference to the recent spate of pirate attacks on the seas off the coast of eastern Africa.

"One day I woke up to an email from Major League Baseball, and it was not only a cease-and-desist [order], but they were also seeking damages," explains Bartek. "It was an absolute nightmare. But, we persevered through it. I like to think cooler heads prevailed, and at the end of the day, we just had to stop making the shirts."

Blasfome's early fall 2012 collection is set to be released on Sept. 15. The new line is centered around automotive racing and the three main automobile-manufacturing countries — the United States, Germany and Japan.