A clear narrative of loss and longing, is palpable, while the details remain ambiguous. 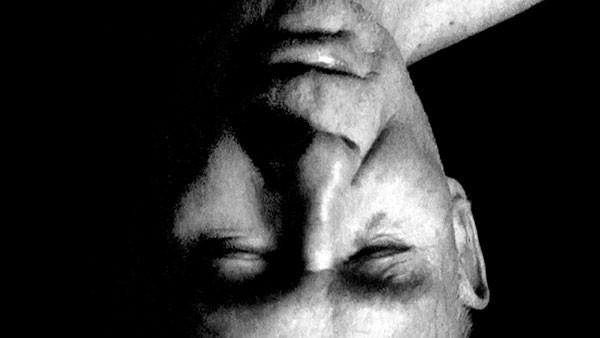 Blaine Siegel describes himself as a storyteller. His 709 Penn Gallery exhibit Dream Body, which incorporates video with sculptural elements, offers viewers two accounts, and the choice to read them as tales separate or connected.

Either way, a clear narrative of loss and longing, regret and remorse, is palpable, while the details remain ambiguous.

On one wall of the exhibit, faces of men are projected, one after another. In extreme close-up, but upside-down, they occupy the entire surface. As we watch each man, his expression shifts slowly, oddly, distorted both by the immense scale and the unaccustomed orientation. Every pore and pockmark, each hair and any scar, is potently visible, magnified into absurdity. The enormity of the person before us both amplifies the emotion represented and muddies it; we can sense anguish, pain, distress, but can't get as clear a bead as if we were face to proportionate, upright face.

This portion of the installation is inspired by the tarot card of "The Hanged Man," its figure suspended by tied-up foot. And while the video's imagery recalls the fortune-teller's cards, the projector itself is also evocative. It sits upon a platform in a contraption resembling the hook from the game of Hangman.

Meanwhile, for the video works projected on another wall, the projector rests on an artificial boulder. In contrast to the larger-than-life faces, these projections reduce the scale, presenting two views of the same room, side by side, at different points in time. In the first, the plain room is unoccupied and dulled, with light shining through large windows, some plants, towels and bath toys littering the floor around a covered, sunken tub. In the second, the pool has been exposed, the open water bubbling and popping, the only perceptible motion in either depiction. The light has changed slightly, the objects on the ground shifted. Eventually drawing your eye is the figure of a child, or doll, prone along the pool — small, naked, head submerged. It's immensely disturbing and provokes an almost physical response, its impact not lessened but heightened by the image's subtlety.

The stories, sharing a corner on adjoining walls, could be independent. But a deflating beach ball has drifted to the men's side of the room, as if it somehow escaped the scene depicted on the facing wall. Siegel tells multiple possible stories.