A documentary argues that keeping orcas in captivity at theme parks isn't good for the whales, or the people who work with them 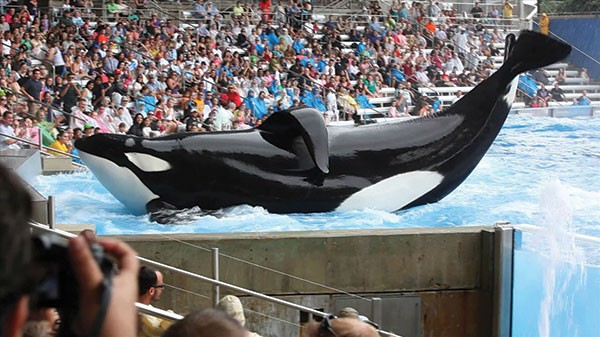 A showman's life: This orca, Tilicum, continues to work at SeaWorld.

Late in Gabriela Cowperthwaite's muckraking documentary Blackfish, about orcas who spend their whole lives as entertainers at marine theme parks, some former SeaWorld trainers take a boat to see the sea mammals in the wild. One trainer cries, "We saw whales swimming in straight lines."

That seemingly innocuous observation is devastating in its simplicity: We saw whales swimming in straight lines. Because at SeaWorld and similar parks, these gigantic sea-faring creatures spend decades confined in landlocked pools. And being restricted is just one of the unnatural states such orcas endure. The highly intelligent, social animals are separated from families, bereft of stimulation and forced to perform "tricks" for our amusement.

Cowperthwaite's film seeks to elucidate two intertwined theories, both at odds with the theme park's cheery marketing: that keeping orcas in captivity is cruel, and working directly with the orcas can be dangerous for humans. Not surprisingly, evidence suggests captivity leads to aggression in whales, prompting attacks on other whales and trainers.

Blackfish revisits the well-publicized February 2010 death of Dawn Brancheau, a longtime orca trainer at Orlando's SeaWorld. She was killed by Tilicum, SeaWorld's star whale, a 12,000-pound animal with a history of aggression: Tilicum was implicated in two prior deaths.

The film also recounts Tilicum's sad life, from his 1983 capture in the Atlantic, when he was only 2 years old, through his three-decade career as an entertainer and sperm donor. He still "works" at SeaWorld, though no longer with people. (Perhaps death will be his release: Captive orcas live significantly shorter lives than their wild brethren, dying at 25-30 years rather than a more natural 60-100 years.)

Parts of Blackfish are tough to watch, whether it's a terrifying assault on a human by an orca, orcas attacking each other, or — perhaps worst of all — calves being removed from their mothers to be relocated to another theme park. You won't soon forget the unearthly keening of the mother whales.

The bulk of the background information is provided by former SeaWorld trainers, shown in contemporary talking-head interviews and in archival footage from when they were young, enthusiastic and unquestioning about their jobs. (The primary requirements for trainers were to be perky performers and good swimmers, not necessarily marine-mammal experts.) A few marine experts weigh in as well.

As a filmmaker, Cowperthwaite has an agenda and sticks to it; SeaWorld declined requests for interviews, and there are essentially no opinions in favor of the parks presented. But even playing devil's advocate yourself — such parks are educational, or inspire children — it's hard to make a case for penning up whales. Just because we can capture and train orcas and other sea mammals for our amusement (and profit) doesn't mean we should.