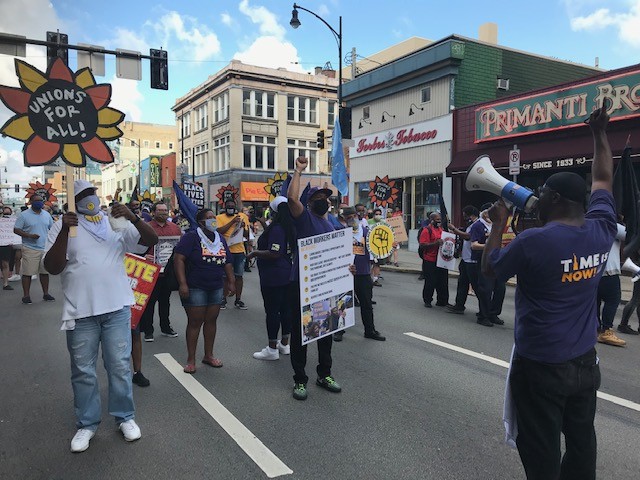 CP photo: Ryan Deto
Protesters marching down Forbes Avenue in Oakland
Today, about 100 people marched through the streets of Pittsburgh’s Oakland neighborhood, advocating for the rights of Black workers. The protest was billed as supportive of the #BlackWorkersMatter movement, and it included grocery workers, bus operators, and health-care employees, as well as people supporting them.

The protest started at 8:30 a.m. at the corner of Forbes Avenue and McKee Place. As they marched down Forbes Avenue, protesters chanted “We work, we sweat, so treat us with respect.” Black people have been disproportionately affected by coronavirus across the country, and in Allegheny County. According to data from the county health department, Black people in the county are more than two times as likely to contract COVID-19 as white people, and are about three times as likely to be hospitalized due to coronavirus as white people.

Advocacy groups believe this is because Black people in Allegheny County disproportionately work in jobs where it is more likely to contract coronavirus, like restaurants, hospitals, or at grocery stores. This theme permeated throughout the morning march, with workers said that some of the statements put out by corporations in support of essential workers and in support of the Black Lives Matter movement ring hollow.

“Only after the pandemic were we deemed ‘essential,” said Steve Kelley of labor union SEIU 32 BJ. “Before it was ‘oh you are just a janitor.’ … We are essential, but we are not expendable.”

Alexandria Cutler, a food service worker at UPMC Presbyterian, says that her employer claims in public to support Black workers, but “behind the scenes, they do not.” She said she has seen workers wearing ripped face masks and that workers have to reuse Personal Protective Equipment (PPE) often.

Kelley said that workers getting adequate PPE is part of a list of demands that the protesters are making. They also are demanding hazard pay during the pandemic, paid sick leave, and the right to form a union. UPMC has been squashing unionization efforts for years, despite the health-care giant bringing in large profits and paying executives handsomely.

The workers also specifically called out U.S. Sen. Pat Toomey (R-Lehigh) and asked him to support the HEROES Act, an omnibus spending bill that passed the U.S. House. The bill is meant to provide economic relief to workers, businesses and municipalities that have been hit hard by coronavirus.

“We are out here on the frontlines with the nurses and the doctors, risking our lives and our families,” said Kelley.

“I am tired — not because it is early — I am tired because Black folks have been working here in Pittsburgh forever,” said Lee. “They have been living through dual pandemics.They have been begging for a fair and living wage from the number one employer in our state.”


.@RepSummerLee speaking to the crowd now, at corner of Forbes and Bigelow. pic.twitter.com/nRKH8ydFjG

UPMC is the largest private-sector employer in Pennsylvania. Lee said that every worker needs paid family leave and sick leave, especially during the pandemic. She decried the fact that many workers at UPMC have medical debt, and that the institution doesn’t pay its workers enough for them to avoid that.

Workers and advocates will also be holding a virtual public hearing later today in support of Allegheny County Council’s effort to pass a paid-sick leave bill that would provide at least 3-5 paid sick days to all workers in Allegheny County. The bill was introduced in April, but has yet to come up for a full vote.