Black Violin performs at the Byham on Fri., Oct. 13

“It’s like walking. It’s nothing that we even have to think about.” 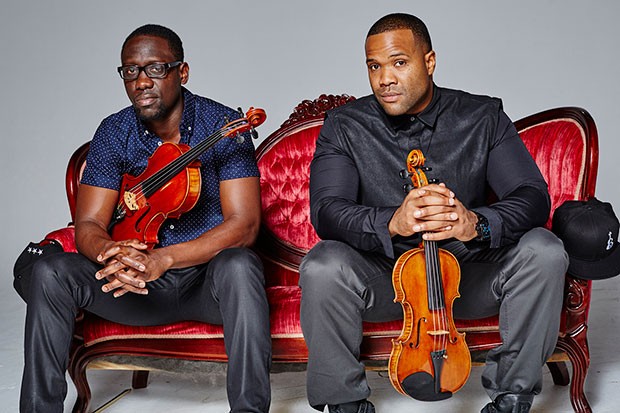 In a pop-music landscape littered with mashups and collaborations of every kind, one of the most unique and intriguing musical hybrids is Black Violin. The Florida-based duo of Kevin “Kev Marcus” Sylvester and Wilner “Wil B” Baptiste effectively combines classical music and hip hop. And in the process, they entertain, educate and inspire all at once.

The two men first stumbled upon the idea years ago when they were classmates in high school. But it wasn’t until several years later — by which time both had graduated college and begun careers as producers — that they refined the concept. “When rappers would come over to listen to our beats, we’d go in another room, pull out the violins and start playing,” says Marcus in a phone interview with CP.

And when they launched Black Violin, there was absolutely nothing else like it. “YouTube didn’t exist yet. American Idol, America’s Got Talent, there was none of that,” Marcus says. But he and Wil B knew they were onto something. The hybridization somehow felt natural. “It’s like walking,” Marcus says. “It’s nothing that we even have to think about.”

By 2005, the duo was confident enough to take its act to the notoriously tough crowd at Harlem’s Showtime at the Apollo. “We were the fifth act that day, and the first four acts all got booed,” Marcus recalls with a chuckle. But Black Violin won over the audience, winning the competition four times and earning the title of Apollo Legends. “That was a driving force for us,” Marcus says. “Whenever there are plateaus in our career, we just think back to the Apollo.”

The style employed by Marcus and Wil B largely avoids jazz and bluegrass, focusing instead on a more classical approach. “I want people to think, ‘Am I really hearing this classical, baroque style of violin on a hip-hop track, hard with sub-woofers?’” When set against hip-hop beats, the resulting sound defies easy categorization. “If record stores still exist,” says Marcus, “I want a whole shelf of just us. Because nothing else really fits next to Black Violin.”