Go looking for pictures of Black Tusk and you'll find snapshots of tour-crazed, grizzled metal-heads doing shots of Jack, hanging out with dangerous swamp wildlife and -- on at least one occasion -- dressed as zombies. Not to ruin anyone's reputation, but these same tough guys -- who spoke with City Paper from Orlando -- turn out to be the sort of charming Southern gentlemen that'll put a Yankee gal in danger of swooning.

Black Tusk is most frequently compared to Baroness, as much for their shared hometown of Savannah, Ga., as for their new-wave-of-sludge sound. The differences between Baroness's slightly sophisticated, vaguely post-punk-influenced brand of metal, and Black Tusk's rougher, restless feel may come from the fact that Baroness is a Georgia transplant, while the members of Black Tusk have been steeped in Savannah sounds since birth. When the band formed in 2005, its members were all living on the same street.

But what is that Savannah sound, exactly? Drummer James May says, "When you're playing in such a hot place, it's so humid all the time, it's really hard to not make heavy music. You go to your practice space and it's like 130 degrees in there, you're gonna come out with something that's pretty heavy and pretty thick, whether you want it that way or not."

Black Tusk's members proudly describe their music as "swamp metal," a term they think they might have coined, but which is at least partly jacked from Lynyrd Skynyrd's "Swamp Music." The 2008 full-length, Passage Through Purgatory, carries some serious weight, but doesn't get bogged down -- stoner metal by way of ADD-addled punks. All three members take on vocal responsibilities, and the combination of guitarist Andrew Fidler's blown-out hardcore howl and May's heavy Matt Pike-esque growl is particularly satisfying.

The band is working on a new record, which May predicts will be "a little bit tighter and a little bit better" than Passage Through Purgatory, and it has recently released splits with Fight Amp, ASG and Holy Mountain. "It seems kind of boring to just put out one album and another album and another album," says single-named bassist Athon. "Each band that we've done a split with is completely different. Some people feel like it's a conflict; they don't want to share the spotlight or whatever, but when someone buys that split they're introduced to another band."

May adds, "That's the Savannah sound though, dude, you know what I mean? Savannah supports Savannah, and bands are always really supportive of other bands. We know how to treat other bands." 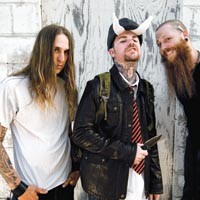