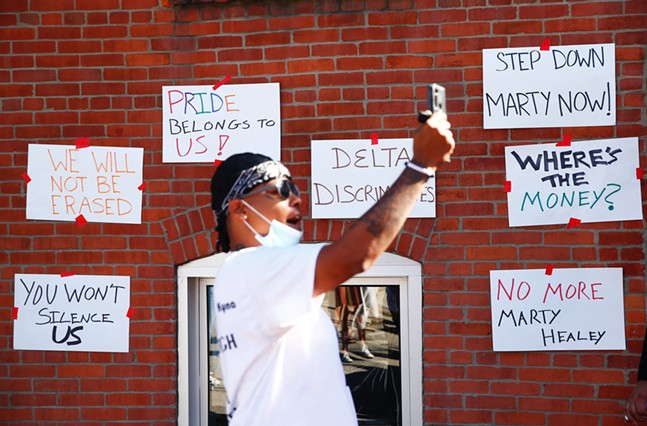 CP photo: Jared Wickerham
Black trans rights activists march against Pittsburgh's Delta Foundation in the South Side on Wed., Aug. 19, 2020.
A group of Black trans rights activists led a protest march in the South Side today, calling for the abolishment of the Delta Foundation. The local LGBTQ advocacy nonprofit, which for years has organized the city's largest annual Pride parade, has been accused of a number of abuses, including discriminating against Black trans community members and not being open about what it does with its funding.

Starting at around 4 p.m. outside Benny Fierro's pizza shop, the march took a few dozen people up Carson Street before taking a left toward Sarah Street. There, the marchers gathered outside the offices of the Healey Company, a home renovation and design business owned by the recently appointed Delta board president, Martin "Marty" Healey.

The group alleges that Healey, who also serves as board president of Persad, another local LGBTQ organization, has not been cooperating with them since he took over for interim president, Jim Sheppard, earlier this month. Sheppard was brought on to replace disgraced former Delta president, Gary Van Horn.

Dalen Michael, who works with the Pittsburgh LGBTQ+ Coalition and TransYOUniting, says the march was a follow-up to a July protest outside of Delta headquarters, which led to Sheppard publicly admitting that the organization lacked inclusivity. He later opened board nominations to “the trans, non-binary, lesbian, and QTPOC communities (queer and trans people of color).”

However, Michael says that, since Healey took over, the Black trans community has been shut out of any Delta decisions. This extends to the Delta board allegedly having closed meetings and not disclosing the allocation of its funding, both of which he says are prohibited by the organization's bylaws. 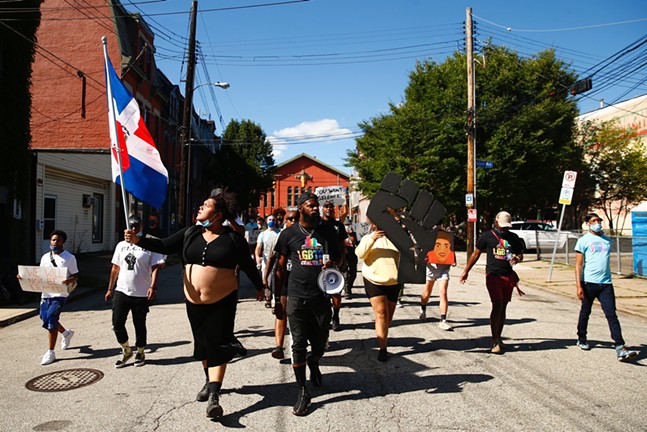 CP photo: Jared Wickerham
Protesters march through the South Side in protest to the Delta Foundation.
He finds the lack of transparency especially concerning given that Delta canceled all Pittsburgh Pride 2020 events due to COVID-19 restrictions. The organization recently held an “Executive Session” to address its dire financial situation, stating in a Facebook post that “90% of its annual funding is derived from Pittsburgh Pride revenue.”

“We want to know what they're doing with the money that they raised for Pride this year,” he says. “They bring in a million dollars in donations every single year, and they're in debt right now. How is that possible? What are you spending that million dollars on when your only thing is Pride and maybe some advocacy?"

Pittsburgh City Paper reached out to the Delta Foundation for comment but has not yet heard back.

TransYOUniting founder Dena Stanley addressed the crowd, describing how she's the only female member of the Delta board and the only Black trans person. She says Delta leadership, the majority of which are older, white gay men, have not done enough to support the city's Black trans population, and, in fact, have often silenced it.

Michael expanded on this allegation, explaining how many in the local trans community became outraged when word spread that Delta had eliminated pro-Black Trans Lives Matter messaging from its social media and mass texts because they were afraid it would scare away sponsors. 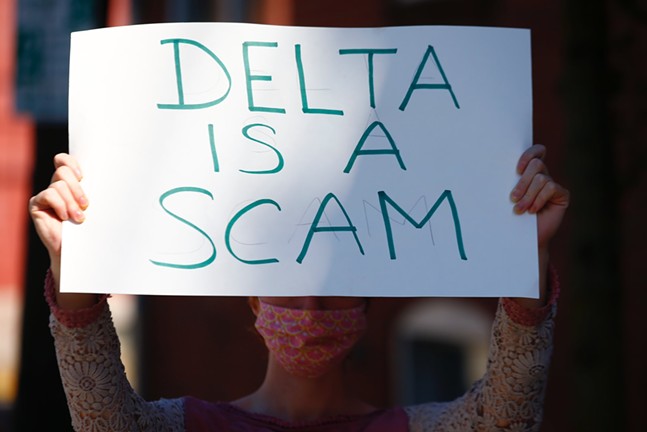 CP photo: Jared Wickerham
A protester holds up a sign against the Delta Foundation on the South Side.
“If you're not willing to lose a couple sponsors over Black trans lives, then we don't matter and you're not considering us when you're planning Pride,” says Michael. “We're not in your hearts and minds when you do anything that you do.”

Event organizers also pointed out how Delta has trademarked Pride and made it inaccessible, both financially and idealistically, to much of the city's LGBTQ population. This includes charging fees to participate in Pride and catering to large corporate sponsors.

This is on top of the many controversies that have dogged Delta over the years. Besides the scandals related to Van Horn's resignation, the foundation has come under fire for hiring white, non-LGBTQ friendly entertainers, posting pro-Trump social media messages, and not using union labor.

Many have responded by trying to disassociate themselves from Pride altogether by creating alternate events like Roots Pride, Pittsburgh Black Pride, and Peoples Pride.

Despite years of being called out on their actions, many still believe the organization has consistently done little to become more representative and inclusive.

Michael believes any relationship the Black trans community has with Delta has broken down, and that the best thing is for the foundation to dissolve and disentangle itself from the city's Pride events.

At this point, he believes Delta is beyond redemption.

“The name is tarnished,” he says. “I don't think that anyone will trust this organization moving forward just because of all the fucked-up shit they've done to the community.”

Stanley told the crowd that while trans people are still under attack nationally by the Trump administration, which has targeted laws aimed at protecting trans health care and trans people in the military, they can at least make a difference at a local level.