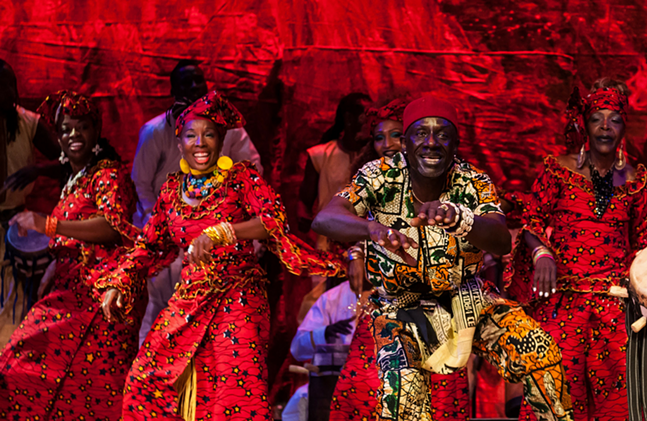 “The three of us came, rather organically, to the idea that we’d like to stretch the theme for Black History Month events, so that it wasn’t simply looking back at history, but also looking forward to the future,” Martin says. She adds that the Black experience in the U.S. is one of “racism, trauma and disenfranchisement, but also one of liberation, resilience and innovation.”

As a result, the festival’s various on- and off-campus events will include live performances, readings, and talks reflecting the current state of Black arts, and how it could influence positive change moving forward. This includes the Black to the Future art exhibition with works by 15 artists from the region, as well as a display board where guests can write six-word stories about their views on art’s role in social justice.

There will also be a talk by artist Alisha Wormsley, a Presidential Postdoctoral Fellow at Carnegie Mellon University and local artist whose There Are Black People in the Future billboard project highlighted tensions between Black residents and developers in East Liberty after it was prematurely removed.

Off-campus, the Kelly Strayhorn Theater and Alloy Studios will host a community workshop by members of the Washington, D.C.-based KanKouran West African Dance Company, and a poetry party hosted by Simone White.

Covington-Ward says KanKouran exemplifies “aspects of Afrofuturism,” a term she defines as highlighting how “embodiment and spirituality are used across Africa and the Diaspora to shape the present and perspective futures.”

Besides showing the breadth of Black art and artists, the event organizers want Black to the Future to envision what could be in the face of a traumatizing past and present.

“The United States and the apparatuses of the state that enable racism are still operational and powerful,” says Mitchell. “If we can imagine something different from this reality, if we can dream it, and act, strategize and create toward it, I believe there’s a better chance of us achieving that different, more equal and progressive reality.”

See a complete line-up of events is on Pitt's Office of Diversity and Inclusion website.