Black Machine official logo
Right now, the Electronic Dance Music (EDM) scene is dominated by white males in every sub-genre: future bass, house, techno, dubstep, drum and bass, etc. House, however, which is often referred to as the start of the electronic movement in America, gained popularity in 1980s Chicago thanks to DJ Frankie Knuckles (the term "house" derived from the venue where Knuckles was director, The Warehouse). And Knuckles, who has seen been dubbed The Godfather of House Music, was a gay Black man. Yet, Black representation in the EDM community is slim to none.

Pittsburgh house/techno producers Justin Sheppard and Gladstone Deluxe, who make up DJ group Black Machine, are forging the way for Black EDM artists in the area with the release of their first project, Device EP, out Sept. 27 on Ballroom Records, a Berlin-based techno-focused electronic label run by Kaiser Souzai and AlBird. The same day as the release, Souzai headlines re:vision at Cattivo — which Sheppard is one of the creators of — along with Black Machine. But even though Sheppard and Deluxe are happy to represent POC in the electronic scene, their main goal is to bring together EDM lovers of all races and identities.

"The real message behind these gatherings and what we’re trying to do is unity," says the duo. "People should be able to show up to an event, regardless of background, enjoy the music, and have a good time."

Ahead of the show and the release, Pittsburgh City Paper chatted with Black Machine about the EP and being a Black producer in the scene. (Answers not attributed to Sheppard or Deluxe are from the duo together.)

How did Black Machine come to be?
We met at a local party here in Pittsburgh last summer and struck up a conversation about music production. Then we ended up DJing back-to-back for a couple hours, diving into each other's music collections. After a few months, we stayed in contact with each other and decided to finally get in the studio to do an EP, and test this collaboration to see how it might turn out. And, well, it turned out pretty incredible!

As two Black house and techno producers, how did you both originally get into the electronic scene?
Deluxe: The first thing that probably drew me in was all the percussive aspects of the genre. I come from a background in orchestral percussion, so I was no stranger to working towards a goal in a field with a very small amount of people that look like me.

Sheppard: For me, it was love at first listen. Originally from Pittsburgh, I grew up through the '90s and early 2000s revering local house music artists like DJ 7UP. When I moved to Miami in 2003, it was like a culture bomb exploded and I was privileged to be able to expand my knowledge of house and techno in a multi-cultural backdrop. I was hooked.

What is it like to be POC in a predominantly white music genre? Are there are challenges/issues that you have faced that you may not have dealt with otherwise?
Luckily for us, there are many Black house and techno producers that came before us and have done amazing things that we admire. The real message behind these gatherings, and what we’re trying to do, is unity. People should be able to show up to an event, regardless of background, enjoy the music, and have a good time. 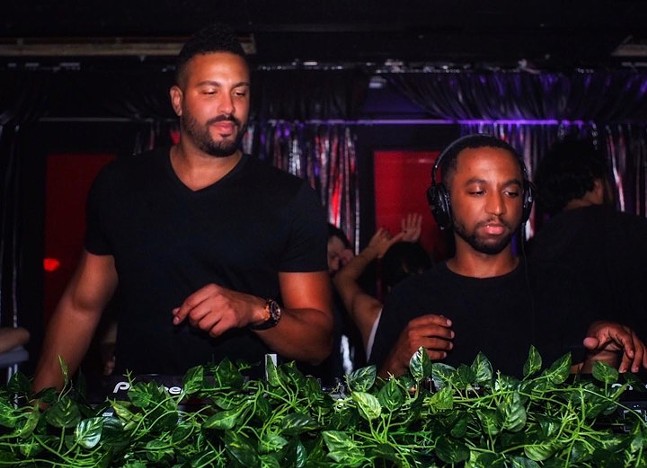 Photo: Matty Ice
Sheppard (left) and Gladstone (right) playing at re:vision in Lawrenceville
Why are you releasing Device EP on Ballroom Records in Germany instead of somewhere closer or more local?
We decided to go with Ballroom Records because they are at the forefront of techno in Europe, and being that Berlin is the mecca for this genre, they have done an incredible job cultivating their following. It was a no-brainer for us. We’re excited for the opportunity to showcase our music internationally, especially in the current epicenter of techno culture.

What has the process of creating your first EP looked like?
We usually get together a few times a week to come up with new ideas and refine them. This particular EP took about two months. We have found a formula that works for us, to draw from each other’s strengths and to maximize our workflow in the studio.

Your EP showcases “retro sound quality in a modern context.” How would you say you achieved that? Was it hard finding a balance between old and new?
Sheppard: We draw from our relative production experiences that we have accumulated. For example, [Gladstone's] modern approach to engineering is second to none, as he is able to build texture, context, and dimension with all of our sounds. Whereas I create the dynamic lead sounds and innovative basslines with a more traditional approach to arranging, to be not only DJ-friendly but also consumer appealing. In the end, it all comes together, and we create something original and fresh every time.

On Friday, your EP will be released worldwide, and Ballroom Records label boss Kaiser Souzai will be playing at re:vision. How are you preparing?
We’re beyond excited to share the stage with him, and are eternally grateful to be added to his prestigious Ballroom imprint, releasing our first EP as we further develop our sound. It’s going to be an incredible night and we’re ready with a ton of new music!

What will this re:vision look like, compared to others? Since this is such a momentous occasion.
You’ll just have to come check it out and see for yourself. We don’t want to give anything away.

Anything else you would like people to know?
We hope you enjoy this first EP! And we have our first official remix, “Freqing Out,” due for release this fall on Colorize Records in London, so keep an eye out for that, along with our next big three-track EP release coming very soon as well!

On the Tahn: Dance parties and live music at Roxian, Government Center, and more (May 5-8)