“I feel like a political football, but I don’t know who is kicking me." 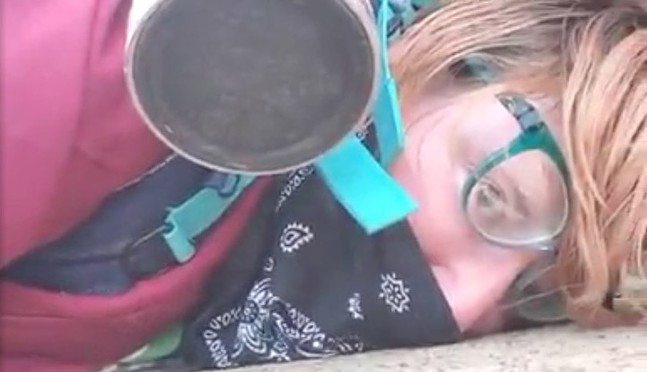 Screencap from video posted by Jay Yoder
Morningside resident Jay Yoder after Pittsburgh Police demanded they drop to the ground on June 1, 2020.
Jay Yoder, a resident of Pittsburgh’s Morningside neighborhood, was asked by protesters to be a medic for a Black Lives Matter demonstration that took place in East Liberty on June 1, 2020. They have experience as an international human rights observer, documenting conflicts in Colombia and the Middle East. Yoder documented and filmed the melee that occurred on June 1, when Pittsburgh Police fired tear gas, sponge rounds, and pepper spray at a group of about 100 marchers on Centre Avenue. Some were injured by the police projectiles, and several people, including Yoder, filed a class-action lawsuit against the city of Pittsburgh and the police as a result.

Now, they tell Pittsburgh City Paper they are having to relive those memories and rehash the associated trauma due to the decisions of Allegheny County prosecutors and Pittsburgh Police officers.

Yoder was part of 22 people initially charged by police on June 1, but then later had all charges dropped by Allegheny County District Attorney Stephen Zappala. Yoder has now had their charges refiled by police, and they are wondering why.

The refiled charges are apparently part of an effort announced by Zappala on Jan. 8, when the District Attorney said the initial charges set last summer against protesters were “badly lacking evidentiary sufficiency,” but after Pittsburgh Police presented his office with new evidence, Zappala said he approved the refiling of 24 of the charges as summons, which he describes as “equivalent to a parking ticket.” 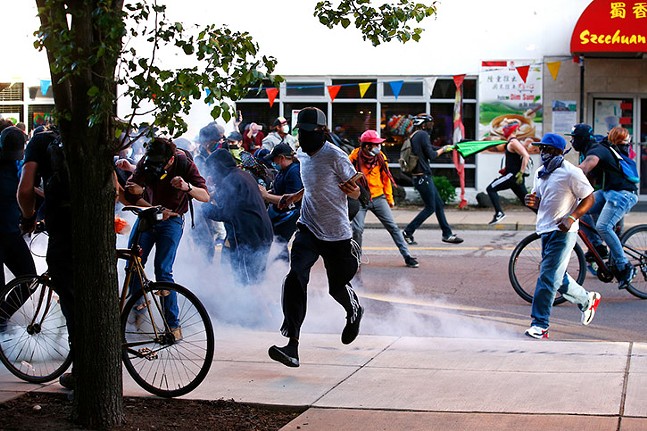 CP photo: Jared Wickerham
Pittsburgh Police clash with Black Lives Matter protesters in East Liberty on June 1, 2020.
In addition to the 22 initially-dropped charges in connection to protests in East Liberty, 39 out of 45 adult protesters had their charges dropped in connection to a protest in Downtown Pittsburgh on May 30. That day, the first protest in Pittsburgh in honor of George Floyd, thousands of people marched Downtown peacefully for hours, and then a group of protesters damaged two empty police vehicles and shattered some Downtown windows. Police eventually fired less-lethal weapons at Downtown protesters. All told, more than 90% of protesters had their charges dropped for actions on those two days of Black Lives Matter protests.

But as of Jan. 28, only five charges have been refiled against people who participated in Black Lives Matter protests on May 30 and June 1. And all of those refiled charges are for misdemeanors, not summary offenses.

On top of that, Yoder is questioning why they are being recharged at all, saying they have video evidence of themself complying with officer’s orders shortly after police cleared the street on June 1. Yoder’s lawyer is also suspicious of the selective nature of the refiled charges so far, as Yoder is named in the class-action lawsuit filed against Pittsburgh and its police force for their aggressive actions on June 1.

“I feel like a political football, but I don’t know who is kicking me,” says Yoder.

Yoder posted video of their June 1 encounter with police on Facebook on June 2, the day after they were arrested and spent time in the Allegheny County Jail for charges that were later dropped, but have now been refiled.

Videos show Yoder on Centre Avenue in the thick of the confrontation between police and a group of protesters. In the first video, police can be heard issuing their unlawful assembly dispersal order; however, no one in the crowd, including Yoder, appears to be starting to disperse. This police order was given before the issued curfew for that evening. Most of the crowd is standing still, with their fists raised in the air.

CP witnessed the events on June 1, and there was no violence or property damage carried out by Black Lives Matter protesters. (A window was smashed in the East Liberty business district, but the perpetrator was not part of the marchers and was actually told by the marchers to stop.) Videos and first-hand accounts show that police in helmets, armor, and full riot gear formed a line near the corner of Centre and Negley avenues, and then fired sponge rounds and tear gas at protesters. Immediately after that, some protesters threw what appeared to be water bottles and possibly other projectiles at the police, while many other protesters ran away. As the police cleared the streets, they used pepper spray on some kneeling protesters, who were apparently asking for medical assistance for another protester. This week, on Jan. 25, another lawsuit was filed against the Pittsburgh Police and the city of Pittsburgh by a man who was injured during the incident.

“I never felt as afraid as I was in Pittsburgh that day, not even during my time in Iraq and Columbia,” says Yoder, who says they observed negotiations and talks between paramilitary forces and local groups while overseas. Yoder says they were especially afraid for the Black protesters in the crowd and says, as a white person, they feel privileged enough to get through the charges, while still acknowledging the trauma from the day. “It took a lot for me to use that footage and go through it again. I was worried people were going to die in front of me.”

“What has been striking over the last few days is that this summer, I was watching people kneeling or not moving because there was an advance on them by the police, and then police spraying and shooting them anyway,” says Yoder of the June 1 events in East Liberty. “In the Capitol, I saw the opposite. I saw the police opening doors for them.”

In another video taken by Yoder later on June 1, 2020 — after the police had fired less-lethal weapons at protesters — police can be seen clearing the street. The video shows Yoder walking towards Whole Foods and attempting to leave the scene and telling police they are trying to return to their car. (Police had blocked off the other side of Centre Avenue at Negley Avenue.)

“My car is this way,” Yoder can be heard saying in the video when officers see them walking. “Just trying to get to my car.”

Seconds later, police yell at Yoder to get on the ground, and Yoder immediately complies. The video cuts off, but Yoder says they were arrested shortly after. “They had just performed the maneuver to let [an armored SWAT vehicle] through, and they formed a line on the other side of us,” says Yoder. “And there was nowhere to go.” 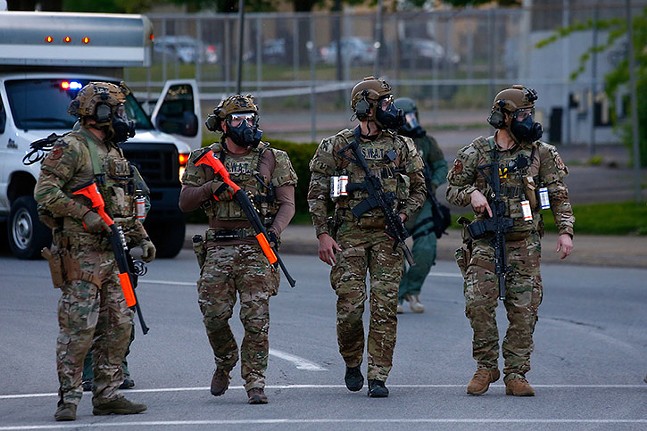 It's unclear what actions Yoder is being charged with, or when they occurred. In a reply to questions about Yoder’s charges, among others, Pittsburgh Department of Public Safety spokesperson Chris Togneri wrote in an email that CP’s question “appears to be for the DA and Mayor's Office” and that the police department does “not speak for them.”

When directing questions to the office of Allegheny County District Attorney Stephen Zappala about the refiled charges and why they were filed as misdemeanors and not summary offenses, Zappala’s spokesperson Mike Manko replied that CP’s requests “refer to charges that were filed by the Pittsburgh Police Department” and “Therefore, any questions concerning the validity or merit of those charges should be directed to them.”

Pittsburgh Mayor Bill Peduto’s spokesperson Tim McNulty said the city can’t comment on the charges because of pending litigation and the two independent investigations that are ongoing.

In his Jan. 8 statement, Zappala said he would be refiling 24 charges because Pittsburgh Police provided him with more evidence of the event. Zappala said this was at the direction of Peduto, which Peduto vehemently denied and said Zappala was spreading misinformation. Peduto is up for re-election this year, and he kicked off his campaign on Jan. 14. Zappala and Peduto have a well-documented history of disagreements.

But now, Zappala is denying participation in the refiling of the five charges against protesters, which are also more serious than the summary offenses Zappala said would be coming.

Yoder’s lawyer Christine Elzer doesn’t buy it, and says the District Attorney would be involved in recharging people, and that Zappala basically said as much on Jan. 8. She believes Peduto has some level of responsibility too, and says he could issue a statement against the refiles if he wanted.

“It’s passing the buck, it doesn’t surprise me,” says Elzer. “It’s failing to claim responsibility when I believe all three of them have some responsibility.” 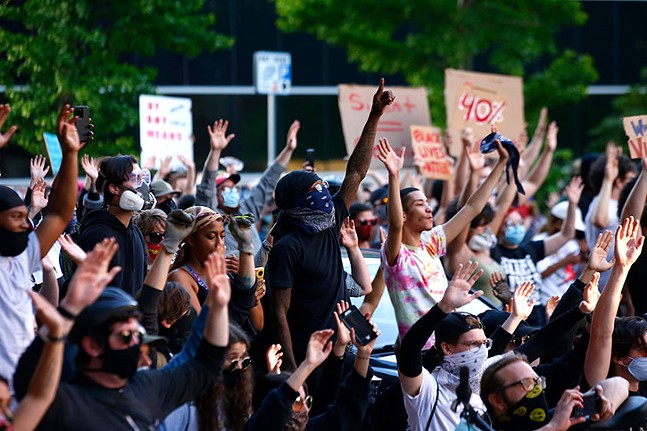 CP photo: Jared Wickerham
Black Lives Matter protesters in East Liberty on June 1, 2020
In addition to a misdemeanor failure to disperse charge, Yoder is also being charged with a misdemeanor disorderly conduct charge under the statute that they were causing public inconvenience and making unreasonable noise.

Yoder says they are confused because when they were first arrested, they complied with officers immediately upon command.

“It truly feels like they are competing statements. They are talking about real human beings in the middle. It is making me wonder if it is related to the civil rights lawsuit,” says Yoder, who is a named plaintiff in a class-action suit against the city. “Here they come back at me eight months later, and I don’t know what is going to happen. It’s honestly really overwhelming.”

Elzer says the level at which Yoder is being charged is “outrageous.”

“Jay is not being charged with any property damage, nor did they commit any,” says Elzer.

She also finds it suspicious that Yoder has been recharged, and that so few others are also facing renewed charges in relation to the protests. Three, possibly four, people have faced refiled charges in connection to the May 30 protests. Only two people have seen refiled charges so far in relation to June 1, and Yoder is the only person who is a named plaintiff in the class-action suit.

Elzer says that part of the class-action lawsuit against the city is that Yoder was wrongfully arrested on June 1. And she says now that Yoder has those charges refiled, the city, the police, and Peduto benefit in their defense against the class-action lawsuit, even if Peduto isn’t directly responsible for the charges. Elzer says that Peduto could come out and disavow the refiled charges if he really believes they are wrong.

“Now they are seeming to rewrite history to justify the fact that they didn’t have probable cause eight months after the fact,” says Elzer. “Peduto certainly benefits from this arrest, as do all city officers. Whether he had anything to do with them is up for debate, but he certainly hasn’t condemned the charges. Time wise, it is certainly very suspicious.”