CP Photo: Jared Wickerham
Oliver Pinder, owner and chef at Wild Rise Bakery, inside their kitchen in Homewood
For Oliver Pinder of Wild Rise Bakery, making gluten free goods is more than just a passing health fad. Pinder grew up watching his mother bake, went to culinary school, and worked in kitchens for years. But about 10 years ago, he discovered his gluten intolerance. Back in those days, there were hardly any gluten-free baked good options, and those that existed weren’t the best tasting or most accessible.

“When I discovered that I was gluten intolerant in the very early days of gluten-free bread, and I don't know if you have had gluten-free bread even five or six years ago, the pickings were not very great,” says Pinder.

After attending culinary school in South Africa and returning to the states to start a Masters at Chatham University in Food Studies and working in various restaurants, Pinder saw a void in the market and sought to fill it. He began baking gluten-free out of necessity, but quickly learned that there were other people that were willing to pay for well-made goods. His business Wild Rise began operating in 2019, and while he and the other baker he works with, Emily Bourdon, do not have a brick and mortar store, their products can be found at local grocers and cafés, as well as their online store.

My first introduction to gluten-free bread was in college, and I suffered through many styrofoamy slices in the name of health. Even now, many restaurants only offer things like lettuce wraps or a no-bread option for gluten-intolerant and celiac folks. I decided to try some of the Wild Rise offerings, and they were yards ahead of gluten-free pastries I’ve had in the past.

I ordered the Aloo Pie, a Rosemary and Olive Boule, and the vegan brownies.

Aloo Pie is a traditional Trinidadian fried dough filled with mashed potatoes seasoned with bandhania (a popular herb similar to cilantro), cumin, onion, and garlic. The cumin adds a bit of warmth to the filling and the potatoes have a savory, peppery taste. The buckwheat-based dough is rich, buttery, and flaky, and isn’t oily. I suspected that was because Wild Rise bakes Aloo Pies instead of frying them. I was right, according to Pinder. Lots of gluten-free doughs suffer from the inability to get flaky, and come with an often grainy texture. These pies do not suffer from that pitfall, and instead are light and delicious.

The Olive and Rosemary Boule is made from sorghum and brown rice flour, and is very flavorful and tender. The bread definitely needs the salt kick the olives provide, and the rosemary is ever present throughout every bite, lending an earthy and aromatic touch. I recommend eating it warm with a little bit of butter for some creamy saltiness.

The vegan brownies were absolutely perfect. Made from buckwheat flour, these brownies are fudgy, rich, and dense, and without the gritty or sandy texture that can come often with gluten-free baked goods. They have perfectly crispy tops and corners, and an intense chocolate flavor.

What’s the secret to making these breads, pastries, and pies? Pinder credits a flour mix he created after reading up on gluten-free flours in a book by Alice Medrich. “She did a book called Gluten-Free Flavor Flours, and I can’t use her recipes ingredient-for-ingredient on the scale that we have to bake at, but it has been so eye-opening to read her very detailed approach to flour.”

Pinder expands on this, saying that many recipes for gluten-free foods exist on a small scale; perhaps for a person baking one loaf of bread for themselves. Learning how to scale up recipes to suit the level at which Wild Rise bakes loaves and pastries was a matter of trial and error. Pinder soon found his footing in this regard and has been bringing creative, tasty food to the Pittsburgh area since. 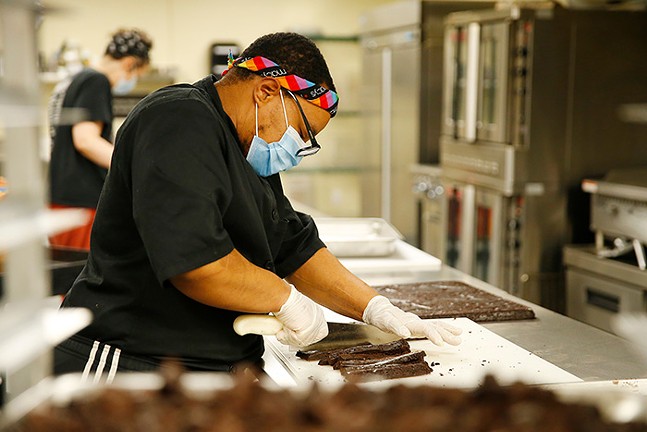 CP Photo: Jared Wickerham
Oliver Pinder, owner and chef at Wild Rise Bakery, prepares gluten-free brownies for Millie’s Ice Cream, which will end up in their “Blackout Brownie,” a collaboration with Pittsburgh artist Cue Perry.
The Aloo Pie is not the only adaption of a traditional Trinidadian dish on the menu at Wild Rise. Pinder, who was born in Brooklyn but grew up in Trinidad, an island in the Southern Carribean, has studded the menu with a few other treats. The cinnamon raisin roll is based on the currant roll. “I had this argument with mom. She was like, ‘You can’t call it a currant roll because you're not using currants.’ I was like, ‘What is the difference?’”

The coconut rolls are also based on a Trinidadian recipe. On the website, they are described as a “coconut, brown sugar, cinnamon, nutmeg, and ginger dream swirl of delight.” The cheese and chive handpie is based on a recipe Pinder grew up eating as well.

“The thing about doing recipes that I grew up with is that I have to adapt all of them. So figuring out what flours to use, what flours would play better with certain techniques, you know, that's always the challenge,” says Pinder.

Another challenge that Pinder found when starting Wild Rise was that, because of the specialized flours and ingredients one has to use to make gluten-free bread, the price point for their goods is out of reach for some lower-income folks. “It makes us seem a little bit niche,” says Pinder. Wild Rise works around that by doing outreach, like donating loaves of bread or being featured at local farmers’ markets at a lower price than usual.

At the beginning of Wild Rise, Pinder and his team were raising funds to buy a mixer, but that endeavor was paused because the commercial kitchen space could not fit one. As a result, all of the doughs are mixed by hand.

“You would think I’d be more ripped by now, but I’m not,” he laughed. 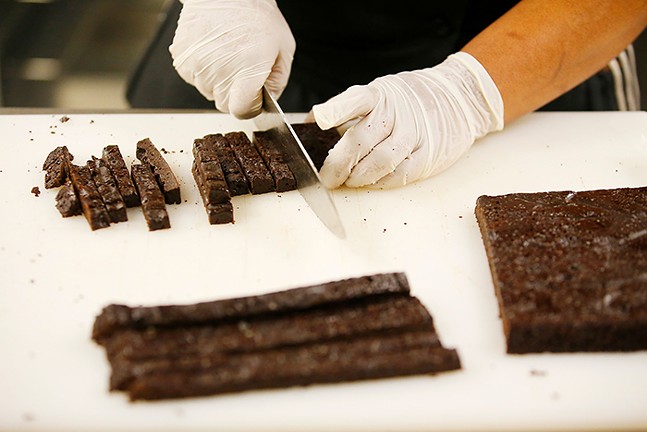 CP Photo: Jared Wickerham
Oliver Pinder, owner and chef at Wild Rise Bakery, prepares gluten-free brownies for Millie’s Ice Cream, which will end up in their “Blackout Brownie,” a collaboration with Pittsburgh artist Cue Perry.
How can Pittsburghers support Wild Rise Bakery during this time? “Folks can just continue to buy a loaf of bread at the co-op because buying that loaf of bread allows the co-op to see that folks still want our product, and buying from our online store does the same,” says Pinder.

Pinder remains positive and hopeful about the future of the business.

“The fortunate thing about being a gluten-free baker in a very underpopulated food field is that gluten-free is not curated yet, especially not in Pittsburgh,” says Pinder. “We’ve been good in terms of reaching folks. Our product has had to be consistently good, and everyone's product should be good, but as a starting business, there is very little room for error. This is great because it's meant that we've had to make sure we've dotted our I’s and crossed our T’s early, but in terms of actual customer support, there's been a lot.”
Wild Rise Bakery.  wildrisebakery.com