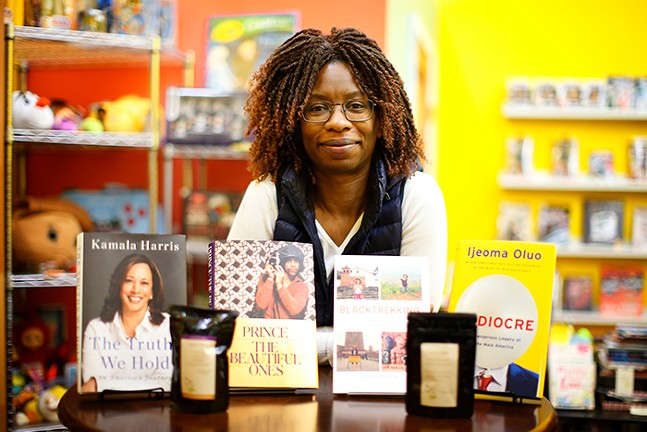 CP Photo: Jared Wickerham
Lea Bickerton, owner of The Tiny Bookstore
Lea and Bill Bickerton, the husband and wife team behind The Tiny Bookstore in Pittsburgh’s North Hills, have a running joke that the store is Lea’s baby. Bill is just the hired help. At just under 300 square feet, and tucked away in the center of Pines Plaza shopping center in Ross, patrons at The Tiny Bookstore won’t find an aisle devoted to popular novels or New York Times bestsellers. Lea, who curates the store’s selection, chooses only to carry and promote books that appeal to her.

“One comment we often hear is that it's difficult to identify what the theme of the store is but that we have a lot of interesting things here,” says Lea. “I think the reason why it's hard to identify the theme is because the only thing that really ties everything together is that I go with what interests me. … Because my goal isn't to just promote bestsellers or even books that I think are going to sell well.”

This mentality may stem from the fact that The Tiny Bookstore isn’t The Bickerton’s primary income source. Both Lea and Bill are full-time criminal defense attorneys who stumbled across The Tiny Bookstore’s location in 2018 while looking for new office space.

“I've always loved books and dreamt of opening a bookstore when I retired,” says Lea. “When I saw the space, it occurred to me that I could sell some of my book collection in our office space. With the nature of our practices, neither one of us spent much time at the office, so my feeling at the time was that we might as well use the space to thin out my collection. The idea evolved pretty quickly from there.”

At first, Lea’s goal was to finally sell some of the old books she had been holding onto. As she started figuring out how to sell books out of the space, Lea also started acquiring more used books to sell.

“While I was doing that, I started to look into what it would take to sell new books, too,” she says. And thus, The Tiny Bookstore was born.

The store’s layout hasn't changed much since it opened almost three years ago with the limited amount of space. “Aside from one of the shorter bookcases being moved about eight feet to the left,” says Lea. It’s tiny, and she likes it that way; Lea has no intention of opening a bigger location. Even after The Tiny Bookstore made Oprah’s national list of “Black-owned businesses people should be aware of” last fall.

The North Hills shop is the only Black-owned bookstore in Pittsburgh. And while that title comes with loaded responsibility, Lea says it doesn't feel much different from being Black in America in general.

“The weight that I feel from it is I worry that if there are any issues, people will see that as a sign that the experience at a Black-owned business isn't as good or reliable as the experience that they get at a business that isn't owned by a person of color,” she says. “The fear that an experience at my store may keep someone from shopping with another person of color? That's what worries me the most.”

Still, Lea’s goal for The Tiny Bookstore is to serve everyone. A yellow box on the right side of tinybookspgh.com reads: “The Tiny Bookstore is race-neutral, but we know that the world is not. Race, ethnicity, gender, and sexual orientation have an effect on how people are treated. Until the world reaches a place that this is no longer true, we will continue to speak out against inequality.”

CP Photo: Jared Wickerham
The Tiny Bookstore
“In my opinion, you can't really be neutral when it comes to injustice or inequality,” says Lea. “If you don't acknowledge the problem and do what you can to take a stand, then you're complicit in allowing the problem to continue. Discrimination is real. Racism is real. Gender bias, sexual orientation bias, and violence against the LGBTQIA community are all real. Bookstores do more than just sell books. We are sources of knowledge for the community. The Tiny Bookstore is my way of sharing knowledge with the community. And one of the things I'm passionate about is making the world just and fair.”

That’s why it’s important to have a Black-owned bookstore in an extremely segregated city like Pittsburgh. Especially one that chooses its book selection based on what the owner, a Black woman, finds to be meaningful and exciting, instead of what is simply going to sell well.

“Any store you shop with reflects the personal values and experiences of the owner to some degree,” says Lea. “Value judgments are made all the time when someone chooses what to carry in their store. My life experience as a Black woman has an effect on what books I find interesting and feel that I can relate to or otherwise want to share. And it's important to have a resource where someone with that life experience and perspective is picking the books. Some day, that won't be the case. That day isn't today. And it won't be tomorrow, either.”

But, above all, The Tiny Bookstore is for everyone, not just people of color.

“Sometimes, people think that a Black-owned business is for Black people only. While I definitely make a point to promote books by people of color that are being overlooked, I truly believe that everyone benefits by reading books by diverse authors,” Lea says.

“I find books and reading fun, and I'm the opposite of a book snob. Seriously. One of my favorite books in 2020 was a Garbage Pail kids’ book by R.L. Stine. Anyone who knows these things will be prepared for The Tiny Bookstore experience.”