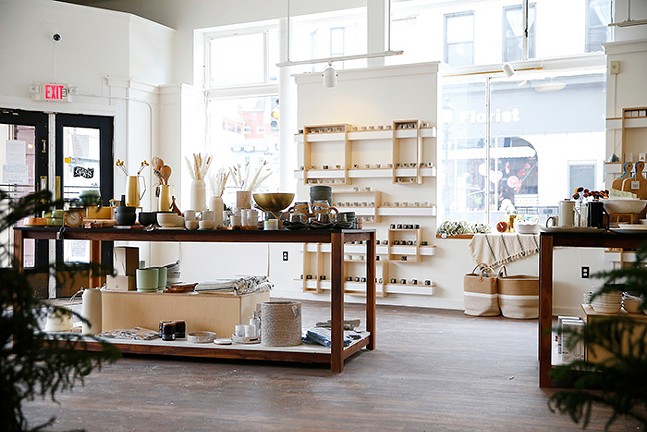 CP Photo: Jared Wickerham
Items for sale inside Tal and Bert in Dormont
Having green space in your home is a great way to improve one’s mental health year-round, especially in a city like Pittsburgh where gray skies can hit extra hard. And when filling your home with wares from local Black-owned business Tal & Bert, the planters can do just as much boosting to your spirits as the plants themselves.

The idea for Tal & Bert came to owners, Val and Ray Talbert, in late 2019. By February 2020, the wife-and-husband team had launched their storefront in Dormont after taking months to perfect their signature design of stunning crystal planters for succulents and other small plants. Despite launching only a matter of weeks before the pandemic hit, the Talberts have already seen monumental success, including amassing over 36,000 Instagram followers, getting national media attention, and having their products carried in stores like Macy’s and Urban Stems. They plan to open a second storefront this year in Sharpsburg.

Tal & Bert planters are made of hand-poured concrete, sculpted by hand in their Mt. Lebanon studio, then cracked to reveal a raw mineral they mined themselves. Most have a gray, white, or black concrete base with a large number of crystals available, including unique finds like kunzite and green apatite. The plants burst from the center of the holders, creating a bright, colorful geode. 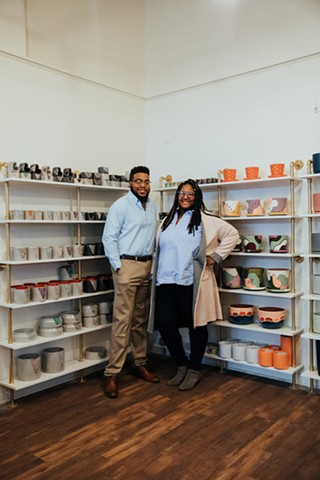 Photo: Bri Santoro Photography
Owners Ray and Val Talbert
Val’s love for crystals started at an early age. Her parents used to take her to caves to go rock hunting as a kid. “I wanted to incorporate raw minerals into every day, functional art,” she says. Many people’s experience with crystals comes from engagement rings that are cut and polished, but Val says she saw beyond that.

“I really wanted to show people that raw minerals can be almost prettier than the polished ones,” she says, noting that Tal & Bert uses natural minerals that have been ethically-sourced. “That’s kind of what my hope was, to show them the raw minerals can have this imperfect beauty to them.”

But despite seeing massive interest in their business, Val and Ray say they have experienced some setbacks being a Black-owned business in Pittsburgh.

“It’s kind of like a little club of brick-and-mortar store owners, especially where we are,” Val says. “The majority are white-owned businesses on our street.”

Throughout February for Black History Month, Val and Ray have launched an Instagram live series where they’ll be addressing these issues and answering questions about being a Black-owned business.

A post shared by Tal & Bert |The Geode Planters (@talandbert)

Val says that getting all of the required paperwork to open their store was incredibly hard; she says people were evasive, and she had trouble getting people to help. “We probably could have opened two months beforehand, but we weren’t able to because no one was getting back to us about opening the store for doing permit checks and everything like that,” she says. With their Dormont location, they didn’t have to look for any other financing, but with their second location in Sharpsburg, they’ve been reaching out for loans and grants towards Black-owned businesses, with little success.

There are also misconceptions and biases imposed on Black businesses, according to Val, who says that many people hold Black businesses to a higher standard. “We have to jog to keep up with [white-owned businesses] walking,” she says, adding that customers who have one bad experience with a Black-owned business often write off all Black-owned stores in ways that they don’t with larger companies like Amazon, Walmart, or Target.

Despite setbacks, Tal & Bert has continued to rise in popularity, and Val and Ray hope to not only grow their production base — branching out into t-shirts and other wares — but expand beyond Pittsburgh (they are currently scouting locations for another store).

They also continue to boost others, with a “Giving Back” tab on their website, highlighting their support for “initiatives and missions around the globe.”
Tal & Bert
2892 W. Liberty Ave., Dormont. talandbert.com and instagram.com/talandbert

Meet the nonprofit aiming to build a more inclusive Pittsburgh