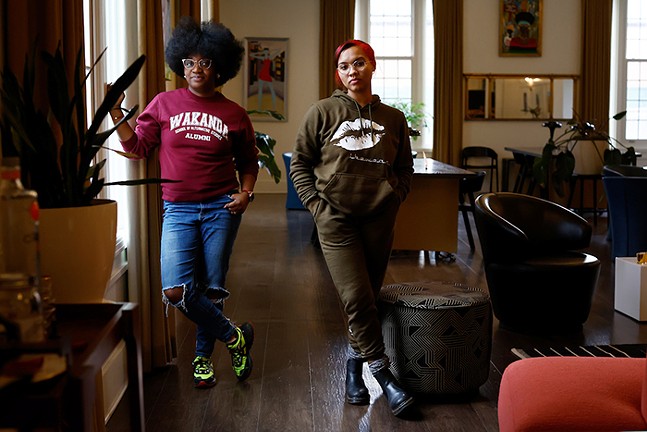 CP Photo: Jared Wickerham
The Greenwood Plan co-founders Khamil Bailey and Samantha Black in Emerald City in Downtown Pittsburgh
From restaurant owners to hair and nail stylists, people love to work for themselves. And in Pittsburgh, there are hundreds of small, Black-owned businesses. Unfortunately, these businesses are not always equipped with the tools they need to succeed.

This is where Greenwood Week came in. Operating as a conference in 2017, it provided support for Black businesses, entrepreneurs, artists, and professionals by utilizing the network and resources in these communities. By providing these businesses with the means to help each other, Greenwood Week — started by Samantha Black of the consulting organization SYLA “Support Your Local Artist” PGH and Khamil Bailey of the Black business consulting firm Cocoapreneur — transformed from a conference to a nonprofit called The Greenwood Plan.

“Essentially [we] engaged organizations and said, ‘Hey, will you help us pay these Black professionals to teach classes in their areas of expertise?’” says Black. “And so we started Greenwood Week on that premise, that we specifically hired Black people to teach other Black people how to navigate spaces that they've already been in.”

The model of the conference lasted for about five years, and then, according to Black, she and Bailey ran into a problem where organizations with financial means didn’t want to give them money to support their programming. That’s when they decided to switch over to the nonprofit model. They started questioning if they could do year-round programming and summits about subjects like real estate and medical marijuana.

The nonprofit was officially started in 2021, and the hunt for a physical space began. Then they found Emerald City. Black says they were touring The Americus Club on Smithfield Street in Downtown, and as they were talking about their practices, the owner happened to overhear their conversation and offered space to Black and Bailey. 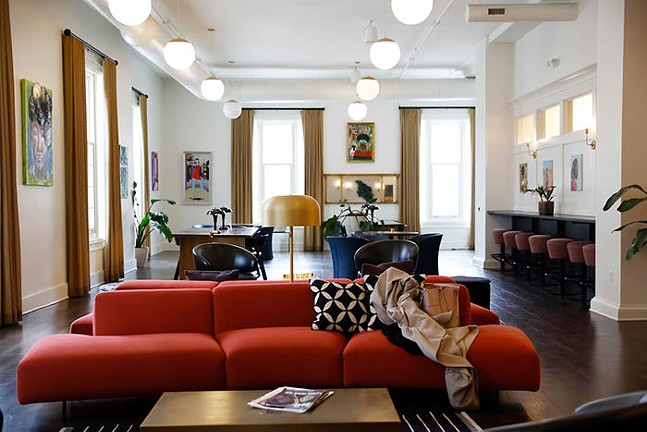 CP Photo: Jared Wickerham
Inside Emerald City in Downtown Pittsburgh
The result is Emerald City, a coworking office space that Black says “kind of closes the gap for the other two initiatives.”

“So there is the Greenwood Plan: the overarching entity that is a nonprofit. And then there's two programs, which are the education-based Greenwood Week, and then the space-based Emerald City,” says Black.

She says that the goal is not to duplicate the efforts of Black people in the region, but to make sure that everyone knows what everyone else is doing in an entrepreneurial sense. So if a local business wants to hire a Black contractor or a tax person, they know where to find one.

Black adds that even though connecting Black people to each other is their main goal, they also want to be sure that they are being inclusive of other identities like LGBTQ people, disabled people, and identities that intersect with Black identities.

“We communicate with people on a cultural level and not on a professional level or anything that mimics white supremacy,” says Black. “Professionalism mimics white supremacy. And so whenever we engage during the classes, we explain to everyone, ‘Everybody here is in a different capacity. Everybody needs certain things.’ So it ranges from providing couches for families to also providing daycare. We also provide dinner because a lot of people have to choose between their education and feeding their families.”

Black talks about the idea of “building wealth” and what a non-colonial vision of wealth looks like. Many people still define wealth as a strictly monetary concept, she explains. Black says when you strip away conceptions that posit wealth is strictly about money, then it becomes about what people would do with their lives if they had the freedom to. Wealth is about resources, she adds, and just because you don’t have millions of dollars doesn’t mean you aren’t wealthy.

“Maybe I want to be in corporate America or I wanna be an investor. I wanna be an inventor. We kind of articulate the freedom that is required to build wealth, right?” says Black. “We talk about freedom as what it is that you want to do to get to your goals, to get to your personal success, and all of those things.”The Greenwood Plan greenwoodplan.com/donate
Emerald City 213 Smithfield St., Downtown Pittsburgh. emeraldcitypgh.com