Black-led Community Spotlight: Pittsburgh Hardball Academy focuses on increasing Black participation in youth baseball and getting its athletes into college 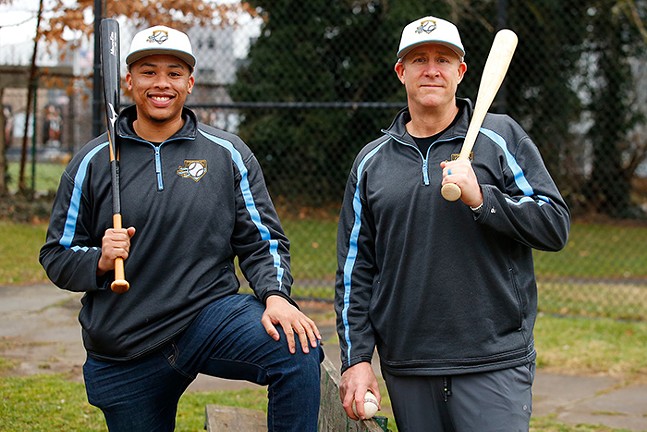 CP Photo: Jared Wickerham
Pittsburgh Hardball Academy co-founders Nelson Cooper IV and Brian Jacobson
There are a lot of stereotypes surrounding urban kids and the game of baseball. People assume that kids who grow up in the city are uninterested in the sport, according to Pittsburgh Hardball Academy co-founder Nelson Cooper IV. People assume that those who do play, particularly Black participants, are mostly “raw” and athletic, but lack fundamentals. And despite the dozens of Black athletes in the Baseball Hall of Fame, people still often assume that urban Black kids don’t really know how to play.

Cooper’s new baseball academy in Pittsburgh is working to combat those stereotypes because he acknowledges that his players still face these negative generalizations even today.

But Cooper believes his academy has found the right formula to end those stereotypes in the Pittsburgh area by focusing on players from underrepresented and underserved backgrounds, and using baseball to help them succeed on and off the field. Hardball Academy not only offers professional coaching and opportunities to play in baseball tournaments, but also provides year-round academic and social enrichment programming, as well as college advisement and recruiting services. The goal is to get kids into college on baseball and softball scholarships.

Cooper played baseball on a scholarship at North Carolina Central University, a historically Black college, and understands that one of the main obstacles in getting urban and underrepresented kids to play baseball in college, and then possibly professionally, is financial. Baseball often requires expensive gear, but also getting noticed by scouts is really only possible by playing in expensive tournaments and with travel leagues.

“We both identified a problem gap in youth baseball today,” says Cooper of himself and his co-founder Brian Jacobson. “For kids that are talented in baseball to make it to the next level, if they don’t have the finances, they have no chance of getting on the radar to college ball.”

Black participation in professional and college baseball has been declining for decades. According to the Institute for Diversity and Ethics in Sports, the Major Leagues currently only have 8.4% Black players. And the NCAA says that only 6% of players in Division I ball are Black.

Photo courtesy of Nelson Cooper IV
Members of Pittsburgh Hardball Academy
Cooper says a huge roadblock to increasing those percentages is mostly money, adding that it typically costs at least $8,000 a year per kid to play in competitive travel leagues. He says Hardball is focused on families who can’t afford those costs to “get those kids to be on the radar, and then get into college.”

Hardball’s goal is to have the program’s cost never be a barrier to entry. In 2020, which was Hardball’s first year, costs for participation ranged from $20-300 for athletes. For the next year, costs will increase to between $500-750 for the year and will eventually peak at $1,000 for a year, according to Cooper. This covers uniforms, videos, mentorships, team practices, travel costs, and lodging, as well as educational programs like SAT prep.

Cooper says the academy is fundraising, and he has invested his own money in the program. So far, Hardball has attracted some corporate sponsors like PNC Charitable Trust and is working with Pittsburgh’s POISE Foundation, as well as Major League Baseball’s Reviving Baseball in Inner Cities program. They are looking for more sponsors.

He says families should never worry about costs, and that he and Jacobson will always make it work if families can’t afford the fees. Cooper says the goal of the academy is to field a team of BIPOC players, or an overwhelming majority of BIPOC players. Their inaugural team was 50% BIPOC, and their younger team next season will be 75% BIPOC. He is proud of the growth, but says it can be difficult to recruit players, since some athletes don’t think they can keep up with wealthier, suburban leagues.

And while Hardball has a focus on urban kids, Cooper says that there is no exclusion to the program and players have come from Pittsburgh Public Schools (which is over 50% Black) as well as Penn Hills and McKeesport.

CP Photo: Jared Wickerham
“Kids that can say, ‘I did come from Pittsburgh Public Schools, and I am just as good as anyone from this region.’ I don’t want this to be considered just an inner city program,” says Cooper. “I want it to be a diverse program, in the city and the surrounding area.” Hardball Academy is a passion project for Cooper and Jacobson, who both have other full-time jobs. Cooper grew up in the Seattle area, and Jacobson is a native Pittsburgher who graduated from Peabody High School (which is now called Pittsburgh Obama 6-12). Cooper says expansion plans for Hardball Academy include a girls softball team and more youth teams.

Cooper is optimistic that this spirit can help at least make a small dent in the region’s struggles with racism.

“If you take an underserved Black kid and white kid together, the way their world works, the white kid will have more opportunities,” says Cooper. “But I am hoping that that person being in a program with Black mentors like this, it won’t be something out of comfort for them, and they can become advocates against racism in the future.”