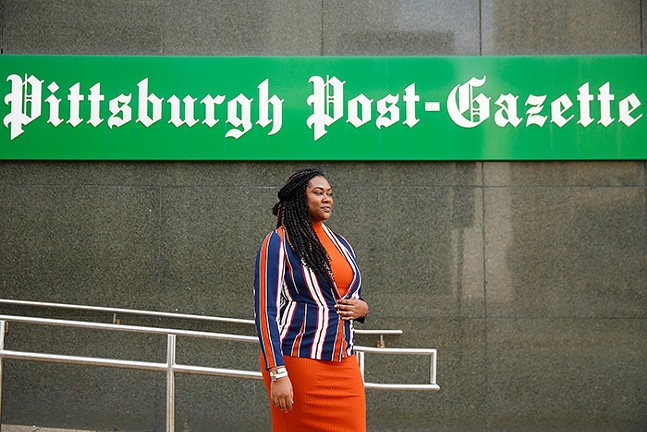 Getting to this position was not an easy task, after the results of the initial election in November 2020 were contested due to irregularities in mail-in votes. Eventually, Wimbley had to be declared guild president twice after a second election occurred. In that election, the two other nominees declined their nominations. But a rocky start to her term has not deterred her passion for the union and for reporting.

Wimbley isn’t originally from Pittsburgh, and moved here for an internship after graduating from Mississippi State University. She describes herself as a “science geek” who initially went to college to study the biological sciences and pre-medicine. She didn’t have many scholarships at school, and so she had a lot of loans and grants in order to pay for her education, but when it became difficult to get funding, she took some time off during her sophomore year and worked two jobs to pay tuition out of pocket.

“I went back to school after that,” says Wimbley, who works as a breaking news reporter for the Post-Gazette. “The experience of working hard to pay somebody off myself changed things. It’s not that I wasn't serious about my education before, but I was definitely more intentional about what my passions were.”

After coming to grips with those passions, Wimbley changed her major to Communication Journalism with the help of her mother’s prodding. Wimbley had always been a writer, and her mother encouraged her to pursue that outlet. During college, she also made history as the first Black editor of the school’s independent, student-run newspaper.

“I came in during a time where it was like, ‘Oh, congratulations for that. You'll be the last editor if we don't make enough money to at least break even this year.’ So that was stressful,” says Wimbley. The student paper made enough money to last through the year and is still going strong years after Wimbley graduated.

Being the first Black person in a position may not be new for Wimbley, but the positions carry a personal weight, especially as a Black woman serving as president of a labor union. Wimbley can see why taking on this position could be seen as inspirational to some, but there’s more to it than that for her.

“I think that there's a lot to be said about me as a Black woman running up for the head of a major labor organization in Southwestern Pennsylvania where it's traditionally white men that spearhead these organizations, you know?” she says.

Wimbley stressed that while she believes her holding this position would allow other Black women and minorities to see themselves in similar roles, there has to be a passion for the work, too. “This work is not easy,” she adds. Having only been serving as president for a little over a month, she is still getting acclimated to her responsibilities and her surroundings. The work has been a “mountain,” especially with her controversial start, but she has continued to move forward and not let the past define her.

Wimbley says she has stepped into this role with new ideas and an unshakeable optimism, even through dealing with controversies at the Post-Gazette, including the paper’s management barring Black journalists Alexis Johnson and Michael Santiago from reporting on last year’s Black Lives Matter protests. In an interview with the New Pittsburgh Courier, Wimbley said the legacy of the Post-Gazette is “hanging in the balance.” She still feels that way. The guild hasn’t had its contract renewed with the Post-Gazette since 2017 when their CBA (collective bargaining agreement) last expired.

Wimbley’s goal, despite ongoing difficulties at the Post-Gazette, which includes the resignation of the former news guild president over allegations of sexual misconduct, is to focus on the union and to let the leadership at the paper work on repairing its legacy. “I would say that my role is to help reset a new atmosphere within our union and among our members,” she says. “And I see my role as being one to continue moving us forward as a union.”

The onset of coronavirus changed the landscape of her job as a journalist. As a breaking news reporter, Wimbley was often rushing to get on the scene or listening to her police scanner to see where the action was. Now, things are a bit quieter. That quiet time has given Wimbley the chance to reflect on what she’d like to see from Pittsburgh media. She says she would like to see media outlets be more intentional about how they are reporting, especially on crime in minority neighborhoods. She says people who are victims or suspected perpetrators of crimes in these communities often just become statistics.

“One thing that I've tried to be intentional about in my own reporting is putting personality and putting a face to the people that are involved in these cases,” says Wimbley. The job, for her, is to tell the human stories of these people.

A part of that fulfillment, for Wimbley personally, is engaging with the arts. She writes poetry and plays the guitar in her spare time and, weather permitting, can be seen busking at Point State Park.