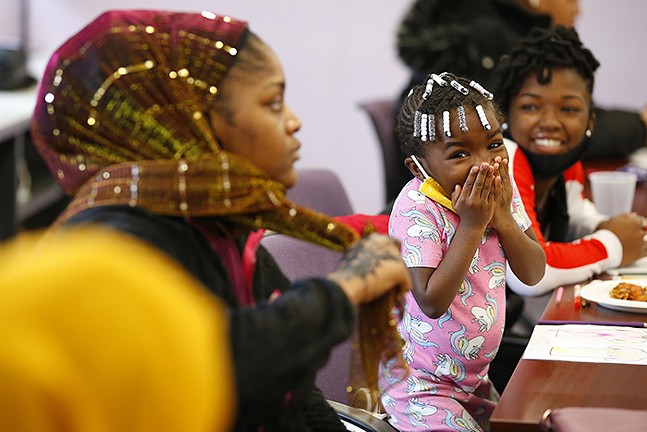 CP Photo: Jared Wickerham
Nia Caroline, 3, reacts while playing Uno during Gwen’s Girls young adult program
A Friday program at Gwen’s Girls is a flurry of activity. A small group of young women and teen girls, all gathered in the West Commons building on the North Side, enjoy pizza as they sketch designs for T-shirts that will soon be sold to help fund the Pittsburgh nonprofit dedicated to empower them. 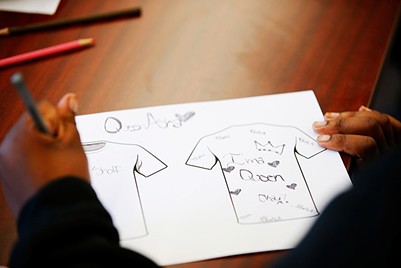 There’s more than design going on. Two girls stand up in front of the class and practice spoken word before an impromptu dance-off takes off between one of the volunteers and a student. Soon after, everyone in the room plays various board games like Uno and ConnectFour.

Gwen’s Girls came to fruition in the early 2000s through the advocacy work of the late Gwen Elliott, who broke barriers in the 1960s when she joined the Pittsburgh Police Department as one of the first Black female officers in the city. Today, the nonprofit holds a large number of events in addition to its young adult program, including recent virtual events like Black Girls and Gender-Based Violence, Disrupting the Pathways to Juvenile Justice For Black Youth, and Bullying and Sexual Harassment.

During her work in the 1960s as a police officer and, later, as a commander, Elliott saw discrepancies with young girls, specifically young Black girls, in the Pittsburgh area that went missing.

Twanda Clark Edgal, Chief Program Officer of Gwen’s Girls, says “people knew [Elliott] because they would see her on the news, because she put a lot of effort into trying to find girls.”

She quit her job as a commander and founded Gwen’s Girls in 2002 with funding from Allegheny County Department of Human Services. Gwen’s Girls became an advocacy group specifically centered on “building the self-esteem of girls and focusing on young Black girls,” says Edgal.

“They’re faring poorly in every system,” says Edgal. “In our child welfare system, Black girls are more likely to go into group homes instead into a family placement. Although we have made improvements, what we know is the data shows us that systems have not been just in the way Black girls have been treated.”

Elliott also made her mark through her work with young teen parents, the foster care system, and after-school programming. But through the many changing programs that Gwen’s Girls has offered, it’s always prioritizes gender-specific programming tailored to help, not only Black girls, but girls from a wide array of different racial, cultural, and ethnic backgrounds.

“There’s not been a place that I’ve gone that I’ve referenced Gwen’s Girls where people haven’t talked about her and talked about what she’s done,” says Edgal. “What’s been interesting to see is how Dr. Elliott has lived that legacy and has continued to make her mark by being actively involved in the community in the education system.”

Edgal adds that Dr. Elliott’s expansion of Gwen’s Girls heavily focuses on academics for Black children and looking at each situation with a therapeutic lens while working with young people.

One of these initiatives is Black Girls Equity Alliance, or BGEA. The program focuses on “improving the outcomes for Black girls in child welfare, juvenile justice, education, and health and wellness.”

Through those four different areas, BGEA creates a space for trauma care training, problem solving, research, and gathering local resources to adequately serve the needs of Black girls in the community.

“It was the most powerful, energizing experience,” says Edgal. “When we talk about helping women, not just Black women but women in general, own their space and own their voice, the summit really does do that. Collaboratively, women work together to really lift up the voice of women, girls, and African-American women and girls in particular.” 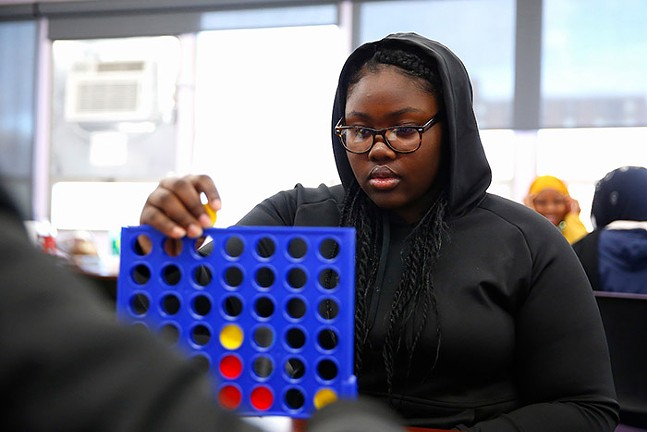 CP photo: Jared Wickerham
A member of Gwen’s Girls young adult program plays ConnectFour.
Just days before the summit, Gwen’s Girls also received a $400,000 three-year federal grant to “develop education and programming to address and prevent trafficking of girls in the Pittsburgh region,” according to the Pittsburgh Post-Gazette. The grant came from the U.S. Department of Justice’s Office for Victims of Crime.

But overall, Edgal says she’s excited to pick up from where Elliott left off with her advocacy. She wants girls who are a part of their programs to know that, “at Gwen’s Girls, we absolutely believe our girls have the potential to thrive and they do as a result of that. We believe in them, we believe in their families, and we believe that — I don’t like to use the word resiliency because they shouldn’t have to be resilient, but we believe in, we know it to be true in that they are able to beat the odds and the obstacles against them.”

Most importantly, the issues these girls face aren’t foreign to the social workers, therapists, and educators that work with them on a daily basis.

“What I love about Gwen’s Girls is that we are reflective of the girls that we serve. We come from the communities they come from,” says Edgal. “We understand what it’s like to be Black girls growing up in systems that don’t believe in them.”