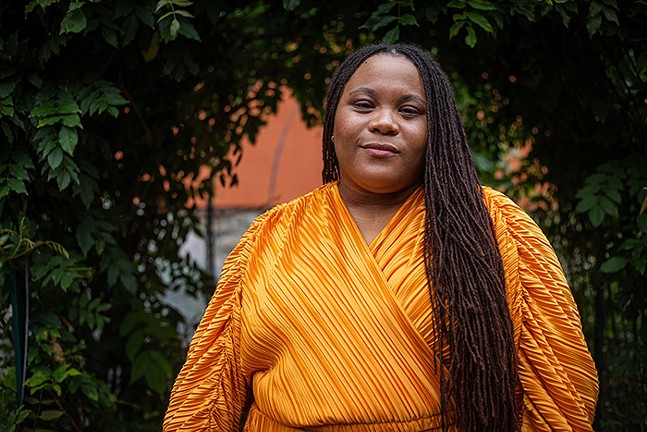 Many artists in Pittsburgh say there is a funding gap separating those with close ties to foundations and those who feel on the outside. Dominique Chestand aims to close this gap through her position at the Office for Public Art, working directly with artists to find out what they need and how the local nonprofit can source that for them.

At the end of 2021, the organization brought on Chestand as a consultant to assist in its goals of helping existing artists working in public art and recruiting more.

A Chicago native, Chestand moved to Pittsburgh in August 2021. When she first arrived, she was the coalition coordinator of VACE (Visual Arts Coalition for Equity), a group of seven small visual arts organizations with the stated mission of making the Pittsburgh art field “more equitable, visible, and sustainable.”

Chestand has a strong background as an artist and as an administrator, and she brings that experience to her consulting work with the Office for Public Art. Earlier on in her career, she says she often had disagreements with arts organizations about their capacity for the work they do.

“I think a lot of leaders when they're in the incubation process, in terms of talking about ideas in terms of making the visual arts sector more equitable, they're very open to the conversation, right?” says Chestand. “They're very willing to reimagine things, but I think when it comes time to follow through that talk with action, people tend to operate with a lot of fear.”

That fear tends to keep arts administrators from following through on promises they make to artists, she says, leading to a breakdown of communication between the two. But Chestand says that she doesn’t run into this issue while working with the Office for Public Art, especially with the work of Sallyann Kluz, the executive director.

“A lot of leaders are leading with the wrong question, especially when their missions say that they're operating in these communities, in the city for artists, but the conversations that fall under that, under those missions, move in the exact opposite direction,” says Chestand.

As a consultant, Chestand reaches out to artists, arts administrators, and funders to understand the gaps between what artists need and what they are receiving. After extensive conversations, she brings back what she has learned to the Office for Public Art and they adjust their framework around their findings.

The specific considerations she takes back are about how artists are paid and how much they are paid, what services the Office for Public Art can provide, and how to get artists interested in using the resources that are available to them.

“What happens a lot is, organizations will say, ‘These are the needs of artists. These are the obstacles of artists,’ but they're not out there asking the artists, out there asking administrators who work with specific communities, ‘What are the obstacles?’” she says. “They are sitting there playing the guessing game and creating a system based on a guessing game and that's not how you should operate.”

Having been in the city for a short time, Chestand has had lots of conversations with those in the communities the Office for Public Art hopes to serve. She says she has learned that the Pittsburgh arts ecosystem runs on philanthropy, and that many artists are getting money from the same funders, and those with the best relationship with funders are getting the lion’s share.

She says that administrators and funders need to come to the artists in their communities instead of waiting for artists to come to them, and to use “nontraditional marketing avenues” that involve building relationships with communities to make a customized process and expand the pool of artists making public art.

As far as the services the Office for Public Art provides, Chestand says they are focused on longevity, and supporting artists, not just for short bursts, but for long-term projects.

The Office currently operates under the Greater Pittsburgh Arts Council, but they are changing that relationship in vision and mission in the future and becoming their own entity.

The Office is also collaborating with Jessica Gaynelle Moss, who started the Seed Fund, a grant program for Black artists, on an initiative that will connect Black artists with others who have the specific skills that they need to succeed.

“In terms of their services, [the Office for Public Art] have workshops for people who are learning more about public art,” says Chestand. “They also commission artists to make sure there's more public art being created by artists from the city of Pittsburgh.”