Ingram is also a security guard for Pittsburgh Public Schools, and during her everyday interactions with students at work, she felt as if there was a lack of mentorship to prepare them for college, look for jobs, or just simply guide and advise the students. With the suggestions of a few local high school administrators, she created her nonprofit as a way to help.

Cultivating Resilient Youth focuses on serving teenagers by helping them find jobs and fill out applications, as well as providing mentorship programs, mediation, and college trips. The nonprofit’s mission is to empower, uplift, and educate young adults and girls into becoming successful members of the community by building a pathway to a post-secondary education or out into the workforce.

Ingram chose the name Cultivating Resilient Youth because “most young people, even though they get a bad rap, they’re very resilient with all that they deal with in the world today, and I wanted [the name] to reflect that.”

This year has been especially difficult for Cultivating Resilient Youth because the pandemic has limited the groups most effective tool: person-to-person mentoring. This has made the struggle to uplift Black teens, especially girls, harder in a region that is disproportionately harmful to young Black people. But Ingram is determined, and she isn’t letting the pandemic or the systemic forces holding down Black youth from slowing her down.

The priority for Ingram, specifically when mentioning Black girls, is to give them the tools and platform to use their voices that she says so many are trying to silence.

“[Black girls] are always judged and told to be quiet, not to be so loud, not to be so assertive. The school-to-prison pipeline is huge with Black girls. They’re very misrepresented and misunderstood,” Ingram says.

According to research from the University of Pittsburgh, Black girls in Pittsburgh Public Schools are three times more likely to be suspended from school compared to their white female counterparts. Higher rates of suspension and disciplinary notices can often lead to interactions with the justice system. White counterparts who participate in the same behaviors are not penalized or criminalized for their actions at the same rates.

“A lot of times, instead of people sitting down and talking, teaching them how to communicate, giving them the verbal tools, they are just persecuted for the things they do,” Ingram says.

It’s important as mentors to Black girls, Ingram emphasizes, that they build up their self-esteem and then allow teens the room for self-expression without judgement or hostility.

But since the start of the pandemic, Cultivating Resilient Youth has had to adapt, a lot. The group is focused on person-to-person mentorship, and the pandemic has thrown a wrench in that strategy. 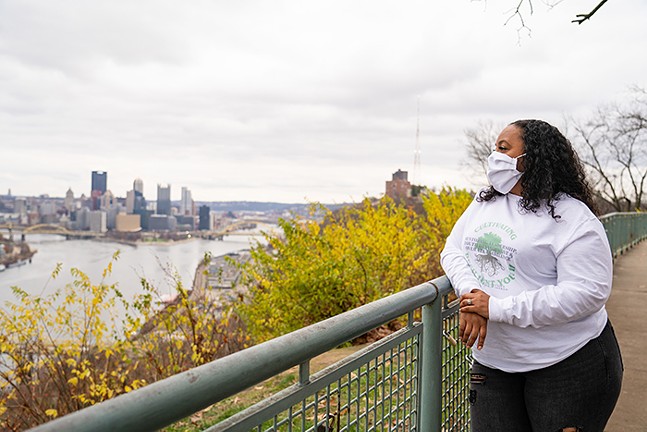 CP Photo: Lake Lewis
Nikkia Ingram, founder and executive director of Cultivating Resilient Youth
“We still meet via Zoom, which is still hard to have all the girls participate,” says Ingram. “Girls have picked up more hours at work, they’re helping taking care of siblings, taking care of the household, so it’s hard to get a consistent participation or it’s sporadic.”

And recruiting new students has become challenging too, since the organization is no longer in high school on a weekly basis. Without being in school, it’s harder to observe which freshmen students need assistance.

“That’s been very hard because they are stuck where they are. That’s been very difficult for my girls because when we come together, that’s their space to be exactly who they are, say what they want, feel what they want, express what they want,” Ingram says. “Even on Zoom, it’s not quite the same feeling because you’re in a space where maybe something you need to say about the people that are around you, and you’re unable to do that.”

The lack of a safe space for students during the pandemic has encouraged Ingram to begin plans to open a transition home. During precarious times like these, Ingram hopes students and young adults can have a secure and neutral place where they can escape from familial and academic stress.

Ingram reiterates that Cultivating Resilient Youth will continue to invest, uplift, and mentor young adults and, specifically, young girls, despite the current obstacles she is facing.

“The biggest thing is that in Pittsburgh, in Pennsylvania, and the world, is we have to learn how to invest in girls more and invest in organizations who are helping girls because if you have a healthy girl, she leads to a healthy mother and a healthy wife and a healthy CEO,” says Ingram. “You know, girls make the world go around, if they’re healthy, in turn society will be healthy.”