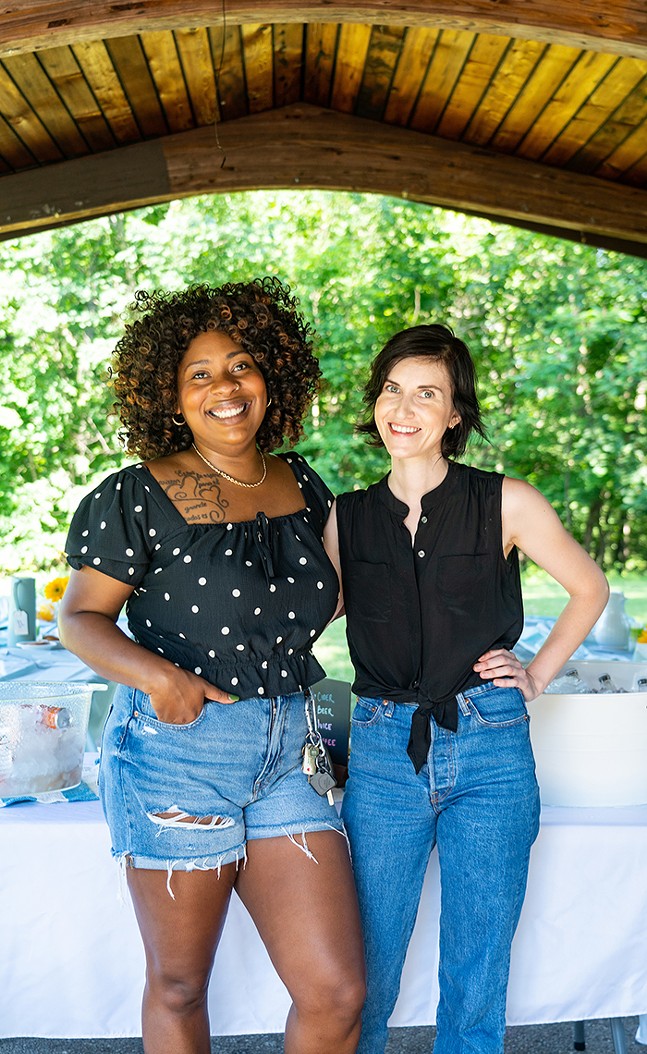 CP Photo: Lake Lewis
Tierra Thorne and Colleen Peddycord
Summer has officially arrived, and with many Pennsylvania adults fully vaccinated, Pittsburgh parks have been bustling with life and activity again. One of the ways folks can celebrate the season and the surrounding greenery is by booking local business Blanket and Board to create a beautiful charcuterie board and picnic in the park. The event planning company is about to celebrate their one-year anniversary on June 25, and as a business, they’ve not only survived, but thrived during the pandemic.

Blanket and Board, launched by friends Colleen Peddycord and Tierra Thorne in June 2020, provides picnic food and accessories for parties, engagements, or even a date for two. This includes a charcuterie board featuring items like bagels, fresh fruits and vegetables, meats, and cheeses, and they offer vegan and gluten-free options. They also provide blankets, tables, candles, flowers, utensils, and more. Once you book with Blanket and Board at one of the parks they serve, you show up at the agreed upon time, and the team will be there with materials in hand for the picnic.

“One thing that we like to do together as friends is go outside, go to the parks, have the picnics, so we hosted a self-care Sunday so that everyone we invited could participate in a safe dialogue and safe space to talk about, you know, all of the stressors that were going on at the time,” says Peddycord. “People really enjoyed it. So from there, we started Blanket and Board.”

About two weeks after the business started, local website NEXT Pittsburgh did a write-up of Blanket and Board that the owners say helped their visibility grow. Peddycord says that during the early days of the pandemic, people “weren't even really going outside, so I think Blanket and Board was an opportunity for a lot of people to celebrate things like their anniversary or birthday or whatever because you're outside, it's safe. It's this kind of a well controlled environment.”

The business also found early support from @blackowned.pgh, a popular Instagram blog that lists Black-owned businesses in the Pittsburgh area. Peddycord, who is white, and Thorne, who is Black, say that when throwing a picnic, the most common answer to the question, “How did you find us?” is through BlackOwnedPGH. Thorne and Peddycord are both social workers who met working in a child trauma treatment center. They say that during the summer of 2020, following the death of George Floyd, the Minneapolis man killed by police, they wanted to create a space for people to have conversations and to engage in self care.

“I think that Blanket and Board was really actually created out of the social work-y side of both of us, where we wanted to just bring people together during a really difficult time,” says Thorne. “I don't know about you, but food just always brings people together. If you're going to have a get together, you better have some food or people aren't going to show up.”

Thorne also adds she finds it especially important to have space for these kinds of conversations in a city like Pittsburgh, which has been criticized for its lack of diversity.

Both Peddycord and Thorne agree they started their business during a time when many people, but especially white people, were looking to support Black-owned businesses in the area. While this isn’t the sole reason for their business boom, they say this shift in interest definitely played a role in their success.

As a business, Blanket and Board’s social media presence is both curated with stunning images of the picnics they provide, and studded with messages of social justice and engagement, including Black Lives Matter statements. According to the team, Thorne does 99.9% of the social media, and as a Black woman, it is important to be able to make those statements.

“I don't know if you can tell, but I'm not just the Black girl, I’m pro-Black, I’m Black af. So there's no denying how proud I am,” says Thorne. “Black issues are important to me because I'm Black, but there's also a lot of intersectionality. I think that's the beauty of being particularly a Black woman, is the intersectionality of being Black and then understanding the hardships that women have faced.”

One of the great things about Blanket and Board is that they are invested in giving back to the communities they serve. They donate a portion of their proceeds to local nonprofits and services within the community.

Some of the consistent feedback Blanket and Board gets from people who have attended their picnics or utilized their services is that the experience was really enjoyable for all parties involved. They’ve had a few proposals happen at their events and even provided food for a funeral.

As social workers, they’ve also done events for the children they serve.

“We did have somebody say that it was the best anniversary they'd ever had in 15 years, or this experience allowed them to reconnect or get back to a sense of normalcy,” says Thorne.
Blanket & Board
blanketandboard.com
This community feature is made possible by the financial support of Peoples, an Essential Utilities Company