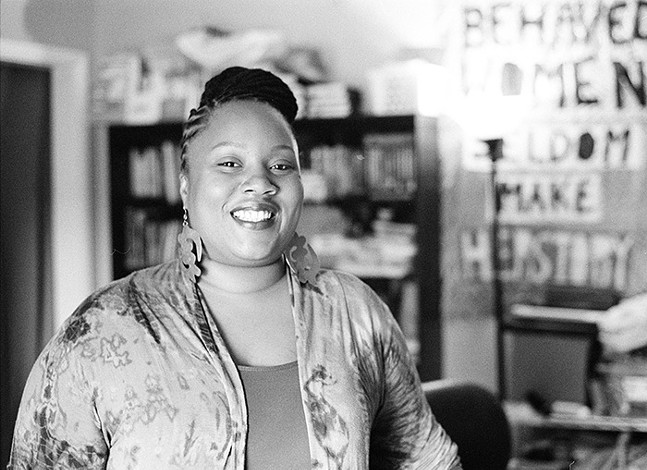 Photo: Njaimeh Njie
Bekezela Mguni
Pittsburgh is a place with a rich Black history that isn’t always known to its residents. There are, of course, very big and recognizable names like playwright August Wilson and photographer Teenie Harris, but local artist and activist Bekezela Mguni wants to bring awareness to smaller players that one might find surprising, mainly stories about Black queer, transgender, and gender nonconforming Pittsburghers through The Black Unicorn Library and Archives Project.

Mguni, a self-described “random, one woman, multi-team show,” founded The Black Unicorn Library and Archives Project in 2014. It is described as a “a beacon of inspiration fueled by the genius of Black women’s stories, queer and transgender herstories, a love of libraries, reading, and Audre Lorde,” a Black lesbian civil rights activist and writer.

“I think life in Pittsburgh for a Black woman is hard,” says Mguni. “I think that we try to, and we do our best to create beauty and create a life worth living even despite that.”

One of the programs Black Unicorn sponsors, Flowers for Black Girls, started in 2014 as a way to honor Black women, but specifically Black trans women and girls, following the suspicious death of Teaira Whitehead, a teenager from Homewood.

Flowers for Black Girls has continued the program in recent years, delivering free flowers adorned with inspirational messages like “Your love matters” to Black women and girls around the Pittsburgh area and beyond.

As an archival project, Black Unicorn has been a part of discovering and revealing Pittsburgh’s Black LGBTQ history through collaborations with institutions like Garfield community art hub BOOM Concepts. The two formed a book club where member and music historian, Miah Benton, shared a bit of Black queer history that many in the group didn’t know.

This includes sharing the story of Jordana LeSesne (now performing under the name Jordana), one of the most important figures in the dance music scene. A Black trans woman, her work has been a part of inspiring many popular electronic music artists.

“I was like, ‘Oh, this is cool that we have the Black trans woman who is an artist and she's contributed so much, you know, internationally and all from Pittsburgh,’” says Mguni.

Black Unicorn has taken on a lot of different shapes and forms over the years, but in the beginning, Mguni says it was just a place for her to express “gratitude and excitement” for Black LGBTQ people, and to create space for herself and others to share their love of reading and books.

“Black Unicorn is an expression of my desire to continue in my practice as a librarian, in my practice as an artist, as an organizer, as somebody who is creative and wants to share spaces with others,” Mguni says. “What drove me to start it was several different things over the course of my life. But I would say my time at Freedom School — there was a program called Freedom School here in Pittsburgh — that Tamanika Howze led for many years.”

Howze was the director of the Kingsley-Lincoln Freedom School, providing literacy enrichment to students in the East End and financed with a grant from The Heinz Endowments.

Mguni adds that reading Black women’s stories saved and transformed her life in a profound way, allowing her to see there was a history of Black queer women that existed long before and beside her.

Books are very important to Mguni, and some of the titles that had a transformative effect on her include Lorde’s Zami: A New Spelling of My Name; chapbooks of Black and Chinese writer Stacey Ann Chin; and works by writers like Sadiya Hartman, Octavia Butler, Deesha Philyaw, and Yona Harvey.

Mguni also praises poet Nikki Finney’s 2011 speech for winning the National Book Award for her book Head Off and Split.

“One of the things she talked about was one of her teachers saying that Black people were the only group of people forbidden to become literate in this country. And that's extremely significant,” says Mguni. “That was something that stayed with me.”

Mguni adds there were many ways Black people engaged with literacy that didn’t include reading and writing text, and many ways that they were intelligent, but that the legacy of Black literature in America is still very important and crucial.

When asked how she and Black Unicorn intend to celebrate Pride this year, Mguni responded: “I'm trying to be present in this life, I am here and that's something to be deeply grateful for.”

This community feature is made possible by the financial support of Peoples,
an Essential Utilities Company