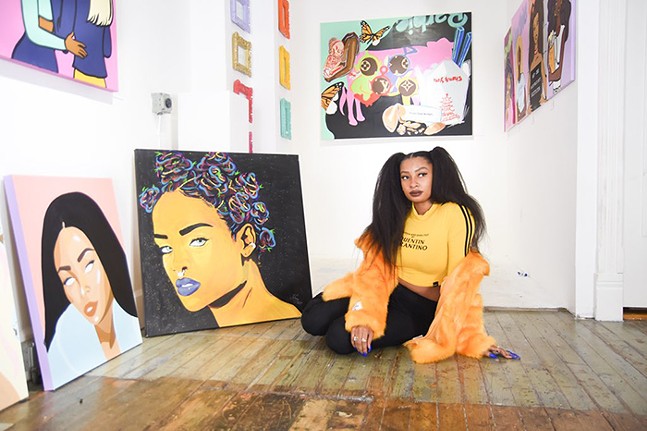 White Barbie grabs the shoulders of Black Barbie and in a voice bubble above her head asks, "Can I feel your hair?"

It's the artwork of Pittsburgh's Kamara Townes, aka Wavy Wednesday, who uses themes from pop culture to highlight issues facing the daily lives, and struggles, of Black women. Another painting by Townes shows a shrugging white Barbie saying, "But my Black friend lets me say it."

The artwork is cute as hell and inviting, the kind that makes you smile at first, then causes a double-take; some will laugh nervously, others will applaud. It's artwork that inspires viewers to appreciate Townes' talent, then have a conversation.

Kamara Townes, aka Wavy Wednesday, talks with her niece in front of her Barbie-inspired artwork.
Why pop culture to deliver the message? Barbie was first created in 1959 and stayed white until Black Barbie's launch in 1980. White Barbie had some African-American friends along the way, but that's over 20 years that Black girls didn't have an official Barbie doll who looked like them. Nearly 40 years later, and most women will still tell you they grew up with the dolls. What better medium to spread a message than something so many of us immediately recognize?

Now Townes is hoping to take the show on the road with the help of a Kickstarter.

Townes, a recent graduate of California University of Pennsylvania, is raising funds to show her work in a New York gallery this May. She says donations will go to travel, gallery rental, shipping, insurance, and marketing. But in addition to helping a full-time Pittsburgh artist get her work appreciated elsewhere, it's worth noting that her Kickstarter rewards are super rad.

For just $5, you can get a Protect Black Women button. Donate $10 and receive a lighter featuring Townes' illustration of a zombie Barbie. Others include signed prints, T-shirts, and for the highest pledge, $350 for an original painting. Townes currently has 79 backers and is over halfway to her goal of $4,000 with 49 days left to go.