Black History Month: Lack of representation is the real monster in Horror Noire: A History of Black Horror

The new Shudder documentary shows the racist past and steadily progressing future of Black horror. 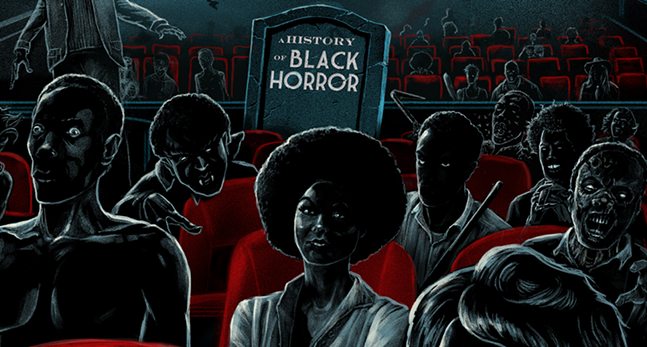 “We’ve always loved horror. It’s just that horror, unfortunately, hasn’t always loved us.” So goes the voice-over introduction to Horror Noire: A History of Black Horror, a new documentary about African-American representation in a genre defined by whiteness, from white teen victims to white, male killers like Jason Voorhees and Freddy Krueger. From there, viewers are treated to an illuminating examination of horror’s racist past and steadily progressing future as it relates to the Black experience.

Directed by Xavier Burgin and based on the book by Dr. Robin R. Means Coleman, the film features interviews and viewpoints from a roster of horror-focused Black film scholars and critics, including Coleman, Ashlee Blackwell of Graveyard Shift Sisters, and author and educator, Tananarive Due. What unfurls is a crash course in revisionist film history, from the early days of silent films and the Golden Age of Hollywood to the present-day success of Jordan Peele’s Get Out.

Each subject explains how horror has treated Black characters, from portraying them as the dreaded Other threatening white to a complicated sense of empowerment in Blaxploitation films like Blacula, to relegating them to mostly minor roles in the slashers of the 1980s and 90s. Sometimes Black writers and directors produced the films, but unfortunately, much like today, that was rarely the case, ensuring that even when Black characters appeared on screen, it was still through a white lens.

Perhaps the proudest moment for Pittsburgh is the hailing of Night of the Living Dead as a turning point for both horror and film as a whole, as it featured a then-unheard-of Black lead in Duane Jones, and worked to, perhaps accidentally, mirror the racist violence of the 1960s Civil Rights movement and Jim Crow South. (It’s worth mentioning that Coleman grew up in Pittsburgh and, in a recent A.V. Club interview about Horror Noire, recounted her fascination with the work of George Romero, saying “horror is just kind of in Pittsburghers’ DNA.”)


For a horror fan like me, it’s especially rewarding to hear perspectives from the actors and filmmakers behind some of the genre’s most notable films – nothing makes me nerd-out like seeing Ken Foree of Dawn of the Dead and Keith David of The Thing trading stories, or the captivating Tony Todd discussing Candyman. Especially astute is Rachel True of The Craft, who, when discussing the “sacrificial Negro” – a term used to describe the trope of Black characters dying to save or further the story of white characters – sighs “Why can’t everybody – or everybody ?”

The film falls in line with other documentaries giving voice to the struggles of people of color in Hollywood, including Asian Americans in the Slanted Screen (2006) and Native Americans in Reel Injun (2009). Much like those films, Horror Noire has plenty to offer even the most sophisticated cinema buff, especially those who assume they already know everything about the racial politics of film (guess what-you probably don’t). With nods to the socially conscious themes and heroic portrayals in newer films like Attack the Block and The Girl With All The Gifts, as a well as the increased investment in Black talent after Get Out, Horror Noire ends things on a hopeful note, which is gratifying to see in this often times less-than-hopeful climate.

See Horror Noire: A History of Black Horror as part of the 2019 Black Bottom Film Festival on Sat., Feb. 23 at the August Wilson Cultural Center (980 Liberty Ave., Downtown). It's also streaming on Shudder.