Porter's tuxedo-gown was the night's biggest and brightest fashion statement 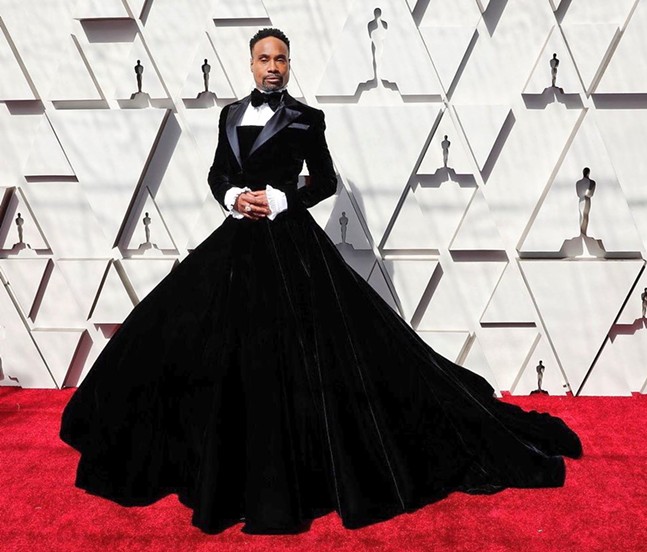 Billy Porter at the Academy Awards, Feb. 17 2019
For many, this year's Oscars were something of a disappointment. Green Book, which has been criticized for providing an overly rosy picture of civil-rights history, took home the Best Picture award, on a night when other Black films like BlacKkKlansman and Black Panther could have won.

But let’s not forget the fashion aspect of ceremony, where proud and unapologetic Black people stole the show. Not only did Ruth E. Carter win for her costume design in Black Panther, a Pittsburgher dominated the red carpet.

Pittsburgh-native Billy Porter wore a stunning assemble of a tuxedo jacket and a velvet gown by designer Christian Siriano. How well people dress at the Oscars is just as important as the awards themselves. And in the sense of best dressed, there was little question that Porter was victorious.

When you come to the Oscars, you must dress up. Thanks @CSiriano for creating this custom couture masterpiece. @OscarHeymanBros you have outdone yourselves with your iconic jewels. Style by @sammyratelle Grooming by Anna Bernabe. @TheAcademy #AcademyAwards2019 #oscars #oscars2019 pic.twitter.com/IpTG2OK20x


Porter wrote an essay for Vogue magazine about why he felt compelled to wear his outfit, and his desire to be as visible as he could as a queer person.

“My goal is to be a walking piece of political art every time I show up. To challenge expectations. What is masculinity? What does that mean? Women show up every day in pants, but the minute a man wears a dress, the seas part,” Porter said to Time magazine about his essay.

If there was any doubt that Porter's gown was a hit, just look at Glenn Close’s reaction upon seeing Porter. This is probably how most Pittsburghers felt: a bit of shock, then amazement, then comprehension of just how monumental his outfit was, and then utter and complete satisfaction.

My favorite Oscars moment is and always will be Glenn Close studying Billy Porter and coming to a clear conclusion. #Oscars pic.twitter.com/tWW529seT2


Porter grew up in East Liberty and Homewood, where he sang gospel. He attended Pittsburgh CAPA and studied theater at Carnegie Mellon University. Early on, Porter’s career struggled to take flight, either because of being pigeonholed into certain roles, or completely shut out because of his identity as a Black gay man.

In 2015, he made a triumphant return to Pittsburgh with his touring Broadway hit Kinky Boots. And his Oscars outfit is bringing him even more notoriety. Not only did the fashion and Hollywood in crowd notice, Pittsburghers proudly gushed over Porter last Sunday night.

I'm inspired to burn every obstacle in my path the way @theebillyporter absolutely burned the carpet down with this look!