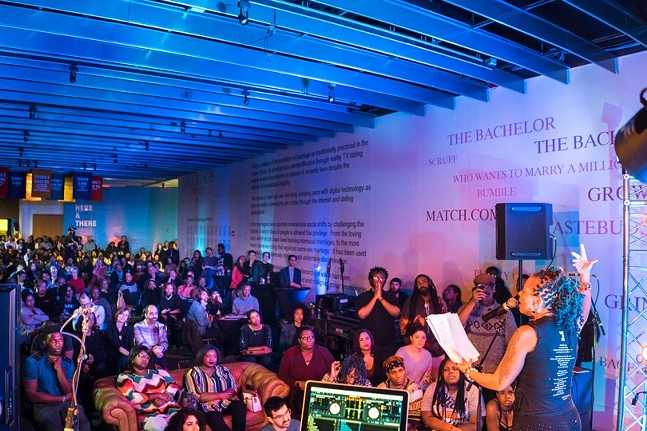 Yesterday, the organization officially announced the launch of its new name and an upcoming schedule of ambitious spring programming. Per a press release, the new direction will work to position AWCC as an internationally-known leading presenter of the arts and cultural expression of the African diaspora.

Since it first launched, the AWCC has set out to honor its Pittsburgh playwright namesake by becoming a home for the arts, storytelling, learning, and exchange around the African-American experience. As part of that, it has welcomed a variety of performers, artists, speakers, and events built around celebrating the culture of African Americans.

The AWCC sees the rebrand as a new beginning after years of financial difficulties and uncertainty.

"After a tumultuous first decade, it’s important to us to re-introduce ourselves to Pittsburgh and the whole region as a strong, financially stable organization bustling with exciting programming," says AWCC public relations and marketing manager, Cydney Nunn. "Our new name, August Wilson Cultural Center, is clean and concise and represents our namesake as well as what we do—bring cultural experiences to Pittsburgh. This rebrand cements us as a solid cultural institution that will continue to grow and expand its reach for years to come."

Currently, the AWCC is home to Familiar Boundaries. Infinite Possibilities, a group exhibition of 12 regional, national, and international contemporary artists curated by Kilolo Luckett, continuing through March 24. Other upcoming February events include a talk with American poet, community activist, journalist, media personality, and politician, Felipe Luciano; a performance by singer-songwriter Gregory Porter; and a one-woman play about Harriet Tubman from Feb. 20-21.

From Feb. 15-24, AWCC will also embark on a collaboration with indie movie theater Row House Cinema for the third annual Black Bottom Film Festival, an event celebrating new and classic African-American cinema. Festival highlights include a 40th-anniversary screening of Sidney Lumet’s The Wiz starring Michael Jackson, Diana Ross and Nipsy Russell, the French New Wave-inspired film Pas Honteux, the new documentary Horror Noire: The History of Black Horror, and A Drop of Sun Under the Earth by the multidisciplinary artist, Shikeith.

In March, the AWCC's TRUTHsayers speaker series welcomes Karamo Brown, star of the hit Netflix series Queer Eye. Other events that month include a concert by Butcher Brown and a conversation with acclaimed Pittsburgh sculptor and Carnegie International artist Thaddeus Mosley, as well as dance performances from choreographer Camille Brown, the Pittsburgh Ballet Theatre, and the Dance Theater of Harlem.