Black Forge had a close call this year when the heavy metal-themed coffee shop's Allentown location almost closed for good. The business will prove it's still here and ready to rock with Forged Fest.

Taking place on Sat., Aug. 6, Forged Fest is in part a celebration of Black Forge's seven-year anniversary, and Hammitt says that surviving the last year has been tough, which makes celebrating seven years emotional for the staff.

Hammitt says he has been friends with Brian Howe from Greywalker for nearly 20 years and was roommates with T-Funk from Solarburn in 2009.

"I guess the real deal is that we had Sadistic Ritual booked for the day and they were open to us adding bands, and we kept adding and adding and adding," says Hammitt. "We reached out to Doctor Smoke because we absolutely love those dudes." 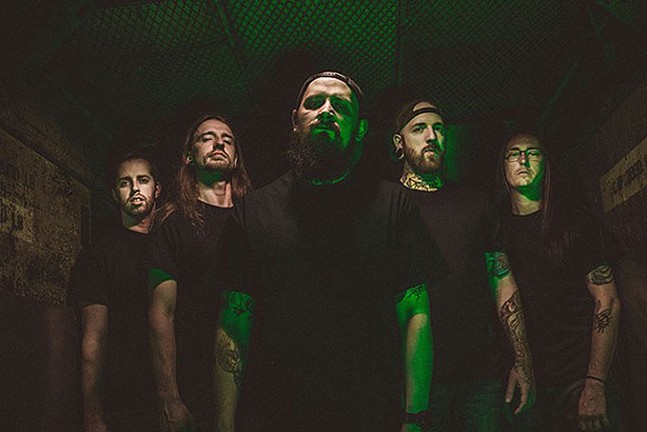 Photo: Nick Prezioso
Greywalker
He adds that two of the bands, Dead Men and Ulyaoth, are playing their very first live sets at the fest.

"We have friends in both bands and we've heard the demos and can guarantee both are going to slay," says Hammitt. "Most of the black metal bands on the fest are friends with our sponsor/friend Josh Stitzer. They really wanted to play Pittsburgh and the date just worked out. I honestly love all the bands on this bill and couldn't be more excited. We've literally have got bands from all over the east coast converging here for Forged Fest."

The show is all-ages but organizers encourage attendees to not bring children under a certain age due to the noise levels at the event.

Hammitt says that Forged Fest will happen again next year, and they hope to partner with McKees Rocks businesses like the Roxian, Rocks Landing, Hawthorn Drum Shop, and more. The goal of the festival is to grow with each event.

"I'm most excited to see fans and friends having fun. I'm the type of person that loves an excited crowd, be it a sporting event, concert, or riot," says Hammitt. "If I'm in a large group of people who are all excited about the same thing I really feel that energy and I love it. I just hope all of this work was worth the effort and people come out to enjoy a day of heavy music and good times. It's all about doing cool shit with cool people and having fun. I think we have a wide array of heavy bands so there's going to be something for everyone in the scene. As long as everyone stays properly caffeinated I think it's going to be a killer day!"
Forged Fest. 3 p.m. Sat., Aug. 6. Black Forge. 701 Chartiers Ave., McKees Rocks. $30. blackforgecoffee.com

Squirrel Hill's new venue, The Marquee, will not open in foreseeable future