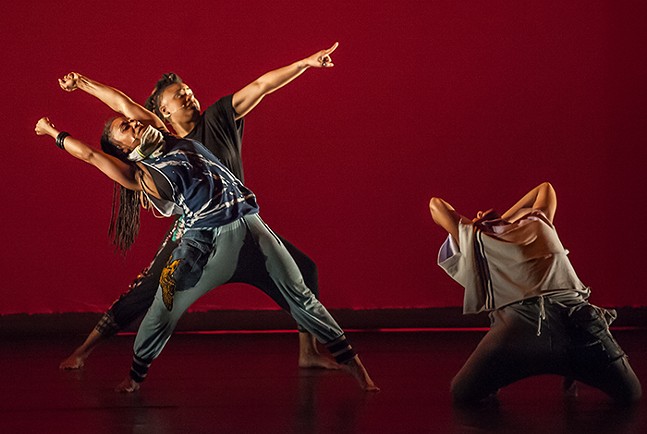 The Pittsburgh Playhouse has an exciting and explorative season planned with six powerhouse performances by Black femme artists. “Shaping the Arts: Black Femme Artists and Creators” is the centerpiece of the Point Park University’s Playhouse Presents 2022-2023 season, described as “shining a light on Black femme artists and creators with performance, dance, and music.”

To kick off the season, Urban Bush Women, a groundbreaking, Black-led performance ensemble with an educational arm based in Brooklyn, N.Y., will present Hair & Other Stories.

Playing Fri., Sept. 9-Sat., Sept. 10, Hair & Other Stories is a dance-theater work celebrating the hair journey of Black women in a non-traditional space. The premise is “to explore race, identity, and ideas of beauty through the lens of Black women’s hair.”

Urban Bush Women was founded in 1984 by choreographer and 2021 MacArthur Fellow, Jawole Willa Jo Zollar. The company seeks to bring the untold and under-told stories to light through dance. Its mission is rooted in core values that include validating the individual, celebrating the movement and culture of the African diaspora, and recognizing place matters.

“We’re thrilled to begin our season with Urban Bush Women’s residency, and then to offer these other outstanding Black femme artists a platform to explore gender, equality, and art in a theme that is especially relevant at this time in a compelling, authentic, and entertaining way,” says Garfield Lemonius, artistic director of the Pittsburgh Playhouse and Dean of the Conservatory of Performing Arts at Point Park University.

The hair of Black women has been a topic of discussion and intrigue for decades. From the time our feet were forced onto American soil, Black women were taught to have a complicated relationship with our hair. In 1865, with The Tignon Law, it became illegal for women of African descent to show their hair in public. The regulation forced Black women to wear a tignon, a headdress used to conceal hair.

The Tignon Law no longer exists today, but recently, the United States House of Representatives had to pass the CROWN Act, which bans discrimination against Black hairstyles. This challenges employers who claim that braids, locs, and how our hair naturally grows from our scalp are “unprofessional,” giving them the freedom to discriminate against Black women who choose not to force their hair into a more European state.

Our hair care isn’t just about looking pretty. It’s about the rituals that go along with caring for and styling it. As little girls, we have memories of sitting on the floor in between our mother’s knees, as she parted, greased, and braided our hair. The hours we spend in the salon communing and catching up with other women we may only get the chance to see while under the hooded dryer. The versatility of our hair and all of the ways it can change with our mood. The way it grows strong and coiled straight up to the heavens. It all means something.

How do we excel to our highest selves? Where do we find liberation? How do we release ourselves from the pressures of everyday life? When are we free? These are the subject matters experienced within Hair & Other Stories.

The performance is actually a continuance of another production from 2001 called Hair Stories, a compilation of experiences collected from Urban Bush Women performers. In a behind-the-scenes video, co-artistic director Chanon Judson-Johnson explains where these stories came from, saying, “Some of the things some of the performers grew up with being young Black women. Ideas and images we had heard and internalized about our hair.” It’s about accepting and believing that Black women are beautiful and valued, even if mainstream media and society want us to believe otherwise.

The intention behind Hair & Other Stories is “to see that very complex analysis of race, take on an artistic dimension, not a lecture,” says Zollar.

The Pittsburgh Playhouse will also present the National Geographic Live Speaker Series with archaeologist Alicia Odewale. In Greenwood: A Century of Resilience, Odewale will tell stories of resilience in the hundred years since the attack on Black Wall Street in Tulsa, Okla.

In the mood for more dance? Check out contemporary modern dance from the Dallas Black Dance Theatre, a company looking to bridge cultures and reach diverse communities. And fans of opera and/or author Octavia Butler should consider Toshi Reagon’s Parable of the Sower. This fully-staged opera illuminates deep insights on gender, race, and the future of human civilization to recreate Butler’s sci-fi, Afrofuturist masterpiece live on stage.

“This season, the Playhouse has assembled an exceptional roster of Black femme artists who are creating conversations through innovative dance, movement, and performance,” says Lemonius.“The Pittsburgh Playhouse is distinguished by presenting the most eclectic and dynamic productions in all of Pittsburgh. Our programming aims to both reflect the rich diversity of our city and to create space for finding consensus and community.”