CP Photo: Jared Wickerham
Wiz Khalifa at KeyBank Pavilion, July 26, 2018
Wiz Khalifa ascended to the international stage as a multi-platinum, award-nominated recording artist. Now, the Pittsburgh native has returned to the city to celebrate his own day and to expand his non-musical venture.

Today, Khalifa came back to Pittsburgh to announce the statewide launch of his medical marijuana brand, Khalifa Kush. The visit coincides with Wiz Khalifa Day, which was designated by Pittsburgh City Council on Dec. 12, 2012.

As part of the Pa. release, the rapper will visit two local Trulieve locations in Squirrel Hill and Washington to meet with medical marijuana patients.

In a press release, Kim Rivers, CEO of Trulieve, says the national cannabis company was excited to work with Khalifa as an "exclusive partner to curate and promote his unique product line exclusively in his home state of Pennsylvania.”

“As an artist, he has such a strong vision of how he wants to express himself," adds Rivers.

Originally launched in 2015, Khalifa Kush is described in a press release as "focusing on high quality and highly sought-after products in legalized cannabis markets," offering a "growing lineup of flower, pre-rolls, vapes, edibles, and concentrates, powered by proprietary genetics."

Khalifa first gained wide fame in 2011 for his breakout hit "Black and Yellow," which became an unofficial anthem for the city because of its reference to the two colors most associated with local sports teams. The song would earn two Grammy nominations and be used as a fight song by the Pittsburgh Steelers when the team competed against the Green Bay Packers at Super Bowl XLV.

The expansion into Pa. marks a big step for Khalifa, who often references marijuana use in his music, and has been described as a longtime advocate for cannabis legalization. He even went as far as launching HotBox and Packed Bowls, two none-too-subtly named food delivery services tailored for those suffering from a serious case of the munchies.

Khalifa also made smoking a trait of Mr. Mitch, the ultra-chill, hoverboard-riding high school principal he voices on the Fox animated series Duncanville.

While Khalifa Kush products will be available in Trulieve dispensaries statewide, the rapper says it's "super cool" to be able to sell them legally in Pittsburgh, adding "and because they know it's Wiz's, it's going to be bomb, of course it's gonna drive the city and the state crazy." 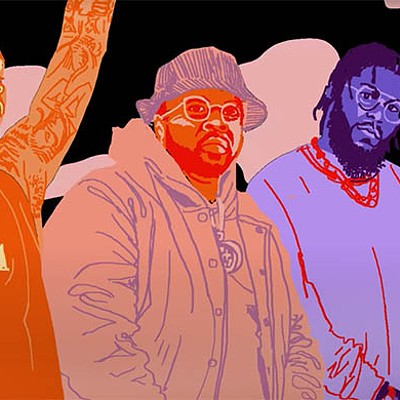