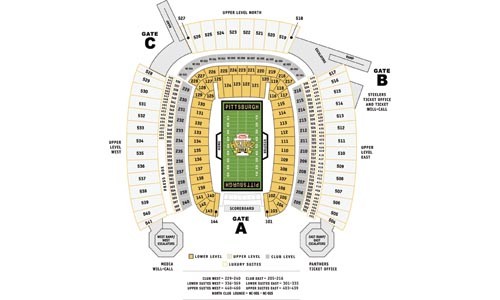 Investors may be wise to skip the stock page and study the Heinz Field seating chart.

Housing prices ... 401(k)s ... mutual funds ... in these troubled times, are there any investments that still hold their value?

Well, at least one: personal seat licenses at Heinz Field.

And if you're one of the lucky fans to have bought one back then, your investment has increased in value eightfold.

"There is a very high demand out there for Pittsburgh Steelers PSLs," says Kyle Burks, president of Season Ticket Rights, an online brokerage that connects PSL sellers with buyers.

On seasonticketrights.com, the average price of a Steelers license is $10,400. Of the 11 NFL teams whose licenses are traded on the site, the Steelers trail only the $15,000 average set by the Chicago Bears. There are $5 million in Steelers PSLs available for sale, the lowest price being $13,500 for two seats in the upper decks. The most expensive offering? A whopping $360,000 for 10 seats on the 50-yardline behind the Steelers bench -- seats that cost the original purchaser a mere $27,000.

Steelers PSL prices are, of course, being boosted by the team's Super Bowl win in February. But "I don't think the Steelers will ever drop like some teams," says Burks. While the price "fluctuates from year to year," he says, "a team like the Steelers will always fetch a high price."

And as they say in the stock filings, past performance is no guarantee of future results. Philadelphia Eagles PSLs, for example, can be purchased for $3,700 -- less than half their 2007 high of $7,300.

But Burks says that some purchasers are actually using the licenses as a safe haven in troubled times.

"A lot of people took large sums of money out of the stock markets and were left wondering what to do with it," Burks says. "So they invested in PSLs because the NFL is a lot easier for them to understand than the stock market."

That's what Pat Smart of Cecil County, Md., has done. He started investing in PSLs as a hobby a few years ago. Now he and his wife are managing their licenses -- an estimated $200,000 worth -- full time.

"This is something I know, something I trust," says Smart. "You put your money in the stock market and hope it's there when you wake up in the morning. But everybody knows the NFL."

Smart's portfolio includes the Baltimore Ravens and Philadelphia Eagles, but lately he's decided to diversify. He's already acquired some seats for the Rams and the Bengals -- arguably the junk-bond investment of seat licenses.

As for Steelers licenses, "Those are the cream of the crop," Smart says. "If you managed to pick up the best seats in the house for $2,700, you're sitting on a goldmine." But, he adds, a lot of Steelers fans "would rather sell their kids then give up those seats."

Not everyone is happy to see Wall Street's ethos creeping into the bleachers. Max Muhelman, a sports-marketing executive who helped devise the original PSL concept for the Carolina Panthers in 1993, told Bloomberg News in August that PSLs are "not a security -- it's a trust that the team passes to a fan.

"The great American entrepreneurial spirit has arisen and some have been sold for profit," Muhelman noted.

If you are unfazed by the possibility that sports may have become a business, though, Burks says it's a buyer's market out there.

"With the economy the way it is, a lot of people are selling," says Burks. "In a high-demand year, you'll find about 1 percent of the seat base for sale. But now it's 3 or 4 percent." Sounding like a broker who is long on blue-chip securities, he adds, "We're seeing bargain prices now that we probably won't see again for many years."