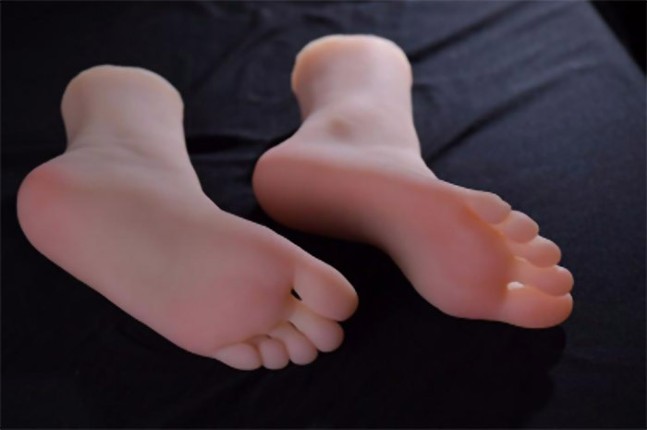 The Realistic Silicone Feet with Vaginas for sale on siliconwives.com
Last week, luxury sex-doll company Silicon Wives launched a new toy aimed at foot fetishists. Made of medical-grade silicone, these $199 sex toys are supposed to be a realistic representation of human feet; that is, if an amputated human foot included a built-in vagina that could be accessed through the top of the severed calf.

Unsurprisingly, the toy — sold as a set of two — received quite a bit of attention, with foot fetishists and non-foot fetishists alike commenting on this Frankenstein-esque pairing of foot and vagina. Many struggled to find the right language to describe it. Adult models Sammy Rei Schwarz referred to the toy as “ankle pussies,” and Busty Von Tease as “vagankles.”

This difficulty in describing the toy points to the discomfort it provokes. On Twitter, Nancy White said she was freaked out that the opening of the toy looks like a vagina, but admitted she’d be equally disturbed if it was a realistic looking penis. “Those things don’t belong on feet," she said.

Yet, the fact that this toy was produced at all suggests demand for it. Sorceress Deirdre pointed out on Twitter, “The sex toys they make for men don’t usually seem so great anyways, so if this feels any good perhaps non-foot fetish people may buy it [too].”

Webcam model MayaBum thinks it has potential. “I like this. I wish I could have my feet molded for my foot lovers,” she says. “I don’t know how I feel about the two vaginas though. … I guess that’s more of a question for the foot fetishists.” Blunt agrees, “If you are making a toy for foot fetishists, you should probably do more market research.”

To answer this question, I reached out to two self-professed foot lovers with penises; they have both chosen to remain anonymous. Speaking of the vagina specifically, the first said, “The idea of a fake pussy is totally unappealing to me — I’d rather use my hands.” Of the feet themselves, the second said, “I am sure there are extreme foot people that would love fake feet. I am not at that level. … It’s the real thing or nothing at all.”

“I would never stick my penis into a silicone ankle and expect to get the same satisfaction as having a real foot,” he added. “Nothing replaces the feel, smell, and taste of the real foot.”

When asked what she could do to improve the toy, Blunt, in a gesture to her own foot-fetish client said, “Make it a replica of my feet.”