When we go out to eat, we don't necessarily find that attractive surroundings make the food taste better; in fact, we fondly recall some truly superb meals we've had in nondescript surroundings. As people whose day jobs both revolve around architecture, however, we appreciate when restaurants show some attention to design, or when they are housed in distinctive spaces.

Of these, few can match the "wow" factor of Bismillah, a Pakistani restaurant which opened recently in one wing of the Sunrise Inn motel opposite the Miracle Mile in Monroeville. It's best appreciated by those for whom the outdated vernacular of mid-20th-century roadside architecture is a thrill rather than an eyesore. "Mid-century Modern" has become a byword in the world of furnishings, but the buildings designed to surround those swoopy, funky chairs don't get as much respect. It wasn't until we stepped inside Bismillah that we realized what a unique architectural artifact it occupies.

The dining room is a soaring space with a central column that spreads, flower-like, into a vaulting wooden ceiling that rises to the exterior walls. The column is surrounded by a tiered stone platform that has been repurposed as a buffet, a far more appealing effect than steam tables. A faux Egyptian fresco adorns one wall, and Islamic motifs have been applied over some of the opaque glass panels on others. Above the kitchen in the back, there's a loft furnished with couches and cushy chairs.

Syed Chand opened Bismillah to serve the local Pakistani community, and the restaurant appears to fulfill his vision of providing a gathering place for Pakistani families scattered far from their homes. We were the only non-Pakistanis there on the night we visited; during our meal, diners from what appeared to be two extended families roamed, mingled and chatted with one another and the owner. (In consideration of non-drinking customers, BYOB diners should notify waitstaff so amicable seating arrangements can be worked out.)

Unfortunately, that clubbiness extended to imperfect service. We had to fetch our own napkins and silverware from the buffet, and there were ordering difficulties that extended beyond language barriers. Nonetheless, once we had a bite of our first appetizer, papdi chat, all that was forgotten.

Chat, the famous snack of the subcontinent, is prepared in many ways, but the versions we've had usually include dumplings, chickpeas and tamarind sauce, all served cold. (It's entirely unclear to us how such a messy dish could be successfully consumed as street food, but we're assured that it is.) At Bismillah, slightly bitter potatoes played off of earthy chickpeas, sweet tomatoes and tamarind, tangy yogurt and pungent onions. The mix of flavors was mild yet vibrant, while puffs of fried dough punctuated the texture with their crispy crunch.

We persist in ordering pakoras -- deep-fried vegetable fritters -- despite frequent disappointment because the idea sounds so good. Accustomed to bland, greasy doughballs, we were rewarded at Bismillah with pakoras that rose to our ideal: deeply browned fritters with fluffy interiors stuffed with fresh-tasting peas, onion and cilantro. The batter itself was subtly spicy, building bite by bite until we reached for our lassi yogurt drinks for sweet relief.

Dal was another dish that exceeded our expectations. We are fond of this traditional dish usually composed of stewed lentils, but we had never had it with other legumes before. At Bismallah, dal is a chili-like stew of not only lentils but kidney and other beans, dark and richly seasoned. Rice was not served; we ordered naan, simultaneously and satisfyingly fluffy, crispy and chewy, to sop up our saucier dishes.

Our server's pronunciation of "karahe" made us understand the linguistic corruption that is the English word "curry." On the other hand, there was misunderstanding in both directions; Angelique ordered lamb karahe but received goat. Though she liked the sauce, assertively accented with garlic and warm spices, the chunks of meat were tough.

Biharee kebab, small slabs of beef rubbed with chiles, garlic and whole peppercorns, had an appealingly savory flavor but a peculiar texture: not so much tender as soft and cakey.

We did not sample the actual cakes and other sweets on view in the display case in front of the kitchen; maybe next time. Surely Bismillah's offerings are more interesting than those of the suburban roadside restaurant that originally occupied this spectacular space. We are glad that Bismillah provides our region's Pakistani community, and those curious about its food and culture, a place to feel at home. 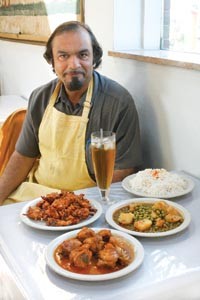