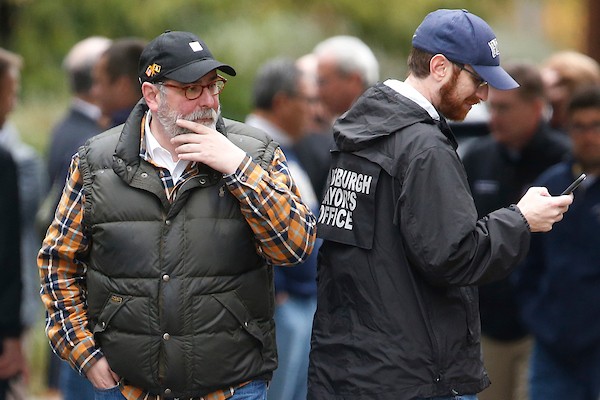 CP photo: Jared Wickerham
Bill Peduto (left) after the Tree of Life shooting in 2018
Pittsburgh Mayor Bill Peduto is used to receiving attacks on social media and other venues, but he recently confirmed to KDKA that he has been receiving a sharp increase in violent threats since signing new laws that restrict gun use in Pittsburgh city limits, and he is taking extra precautions.

He said he recently increased his personal security detail recently, especially when he is out and alone in the evenings.

“The security that I presently have is with me now at night. Usually, at the end of the day, if I did anything, I just went out by myself,” Peduto told KDKA today.

The gun laws, which ban the use of assault-style guns and the use of high-capacity ammunition within city limits, passed in April. Those bills have yet to be enforced because they are facing a court challenge.

But Peduto has been very vocal in the aftermath of two mass shootings occurring this weekend in El Paso, Texas and Dayton, Ohio.

Woke up this AM to yet another mass shooting. Called my friend, Dayton Mayor @nanwhaley to offer support & advice gained from our horrific experience. Incredible that states & federal government continue to ignore this epidemic. Doing nothing will not solve the problem.


Usually, the more vocal the mayor gets, especially about gun control, the more criticism he receives on social media, often given silly nicknames. At times those comments can become threatening. Peduto told KDKA that he has been turning over the most threatening of those comments over to his security detail.

Peduto's chief of staff, Dan Gilman, said on Twitter that it is sad the Mayor feels the need to increase his security due to increased threats, but that won't stop his administration from advocating for gun restrictions.

It is a sad and violent world we are living in - but it will not stop us from fighting for what is right https://t.co/Q3URgLDoMp