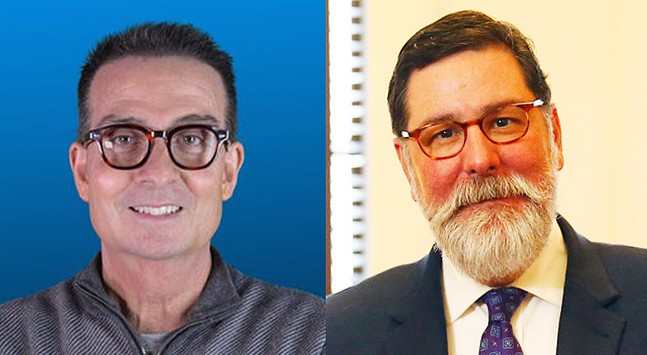 After multiple times of calling her "sir" on a media call, Dr. Levine asks Marty Griffin to "please stop misgendering me." He apologizes.


A transcript of the exchange is shown below:

GRIFFIN: When folks know what yellow is kind of sort of but they don't even know what green is because you don't. What's the end game, sir? Where do we get to the point where folks can be confident they can conduct business if they do it safely and there's no time frame and there's no window? Correct me if I'm wrong, sir ... ma'am.
[Levine answers]
GRIFFIN: How do you respond, doctor, to the conjecture that your response is jeopardizing the health and well being of seniors by moving them into nursing facilities even if they're no longer COVID positive, sir?
LEVINE: So please don't misgender me.
GRIFFIN: I'm so sorry.
LEVINE: It's really insulting.
GRIFFIN: I apologize. It's not malicious. I apologize. I'm so sorry.

This incident was the main reason that Pittsburgh Mayor Bill Peduto decided to cancel a scheduled appearance on KDKA Radio. He was set to be interviewed on the Lynne Hayes-Freeland show, and tweeted that she is a fair, strong journalist and was not to blame. But he criticized the radio station, which has come under hot water as of late.

Peduto's spokesperson Tim McNulty told Pittsburgh City Paper that Griffin's misgendering was the main reason the mayor was canceling the interview, and that the mayor was also critical of Griffin's reporting over stories about sand in the Polish Hill skate park.


Cancelled interview w/ Lynne Hayes-Freeland for tomorrow. Not upset w/her, she’s always been a fair, strong journalist. But will not support @KDKARadio behavior. Growing up, KDKA had good people who made us proud to be from Pittsburgh. Now, it shock-jocks, sensationalism & worse.

The incident happened during an exclusive weekly media call with members of the Pennsylvania NewsMedia Association (PNA). Several people, including many journalists, criticized Griffin. Chris Potter of WESA tweeted, "What an absolute embarrassment to the western Pennsylvania press corps." Others wondered why a journalist with such a long career had issues addressing Levine properly. It has been very well publicized that Levine is trans, and her profile has risen very high during the coronanivrus pandemic.

Griffin acknowledged the incident on Twitter, saying that it wasn't intentional, and that he apologized. He also said he was not focused and "doing six things at once."


I apologize. I apologized twice. I truly did. It was not intentional. It was not. I was not focused. I was doing six things at once. https://t.co/cdBO9r1iF8

A request for comment to KDKA Radio was not returned by press time.

This apparently isn't the first time Griffin has made offensive statements about trans people and the transgender community. According to local blog 2 Political Junkies, Griffin misgendered Chelsea Manning in 2014, calling the former soldier and whistleblower "Mr. Bradley" repeatedly on air. According to the blog, Griffin also called Manning "Mr. Manning"  and said she had some sort of "bizarre sex-change thing" going on. Manning publicly came out as trans in 2013.

In 2007, Griffin also was criticized for his reporting on a local Presbyterian minister, and possibly outing him as gay in a series of teasers for Griffin's story. The minister committed suicide the day the story was set to air, but the story was pulled at the last minute.