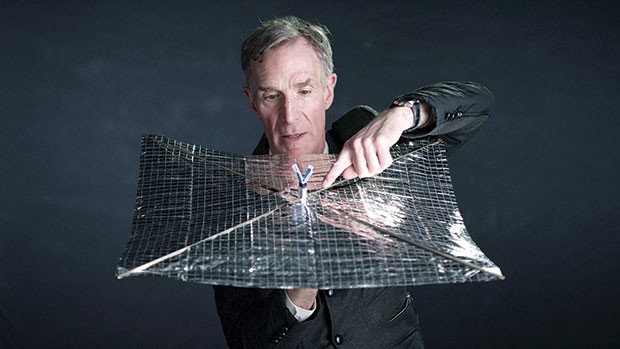 On first thought, it would seem to be simple for a guy nicknamed “Science Guy” to make a mid-life transition from TV personality to accepted scientific expert. But Bill Nye: Science Guy, a new profile directed by David Alvarado and Jason Sussberg, says: Not so fast.

Everybody under 40 knows Bill Nye from his eponymous PBS shows on which the effervescent, bow-tied bean-pole explained science to kids (and likely plenty of adults, too). His on-air goofiness made knowledge palatable and engaging, as when he explained photosynthesis while driving a car covered in lush green grass.

But the show shut down in 1998, and Nye has worked to find a new place in America’s increasingly fraught cultural-scientific landscape. The last two decades have seen a resurgence in creationism (a.k.a. not believing in evolution), as well as increasingly polarizing debates about whether human behavior contributes to climate change, or whether climate change even exists.

Nye, who has a degree in mechanical engineering from Cornell, began tossing himself into public debates. To both acclaim and criticism, he debated Ken Ham, founder of Kentucky’s Creation Museum, in Kentucky. (There, visitors can pay $30 to be misinformed that men and dinosaurs co-existed.) And he decided to remake himself from zany teacher into a fierce advocate of addressing climate change: “Nowadays, I’m talking to adults and I’m not mincing words.”

The film bounces around about, seemingly having trouble capturing the assorted sides of Nye. Scenes of Nye taking goofy selfies bounce against others where his motivations are questioned (how enamored of fame is he?) or where he hunkers down in a lab to oversee a new “solar sailing” vessel. The central question of how does one become a “scientific statesman” in our current media environment, which is entertainment-driven and filled with misinformation and even disdain for science, is an intriguing one. Nye is clearly up to the task — he’s articulate, knows his facts, is unafraid to take on challengers. But the film, in its quest to be entertaining, drives into some sillier potholes, such as the work-out routine of a climate-change denier, or Neil deGrasse Tyson and Nye sharing a bottle of space-themed wine.

But judging from how the millennials depicted in this film lose their minds when Nye walks by, that cohort should definitely check out this film to see what their grammar-school tele-buddy is up to.

From Rome to Pittsburgh: Local groups rally for Climate Action after Pope's remarks