Bill is Due: Peduto's ascent to the mayor's office comes with great expectations from the citizenry and himself | News | Pittsburgh | Pittsburgh City Paper

Bill is Due: Peduto's ascent to the mayor's office comes with great expectations from the citizenry and himself 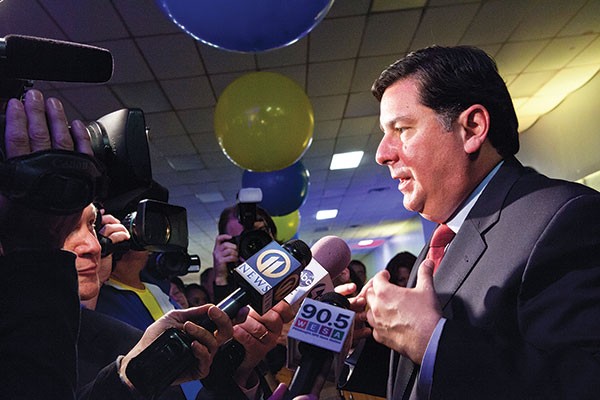 It took Bill Peduto less than two hours to declare victory on Election Night: With the election a foregone conclusion, the mayor-elect gave his victory speech at around 9:40 p.m., to the cheers of an audience gathered at Homewood's Greater Pittsburgh Coliseum. By another reckoning, though, the announcement was nearly a decade in the making.

In that time, Peduto had lost one mayoral run and abandoned another, headed a council majority, and then lost it. This year's victory came only after he'd painstakingly built a political operation that helped elect allies in races across the city.

And that may have been the easy part.

Asked by a reporter what it meant to win the November election with 84 percent of the vote, Peduto answered, "I have my work cut out for me."

"We weren't with him back then," agreed Gabe Morgan, state director of the Service Employees International Union's local 32BJ, on Election Night. When Peduto joined council as the representative of the affluent East End, in 2002, he boasted of being the knowledge-worker's representative: An early initiative involved supporting after-hours clubs in the interest of creating a vibrant nightlife. More recently, though, Peduto touted a "prevailing-wage" bill for workers in tax-subsidized buildings, and backed Hill District residents seeking neighborhood benefits from the new Penguins arena. "We saw Bill, who represents the wealthiest in the city, fight the hardest for working people," Morgan said.

And Peduto, who was repudiated in black neighborhoods throughout the city in 2005, won many of them this year, thanks partly to allegiances with black leaders like state Rep. Ed Gainey. Few missed the symbolism of Peduto's decision to hold his celebration in one of the city's most neglected communities. As Morgan put it, "We define progressive as where you hold your victory party."

But future challenges were evident even that night. While some of Peduto's rivals — including City Council President Darlene Harris, and councilors Daniel Lavelle and Ricky Burgess — attended his party, no honeymoon lasts forever. Burgess, who represents Homewood, wryly said, "I'm glad my advocacy has brought so much attention to Homewood. I'm looking forward to disproportionate resources being steered into this community."

Meanwhile, as Barack Obama can attest, the progressive voters who make up Peduto's base can become disenchanted quickly. Peduto had been brushed back in October, when the Pittsburgh Post-Gazette reported that he and Allegheny County Executive Rich Fitzgerald were pondering a shift that would move Port Authority bus routes to the periphery of Downtown. The idea had been proposed before, but never fails to generate a populist backlash — this time, it took fire even from transit-backers whom Peduto has championed. (For his part, Peduto says an overhaul is a long way off — and if it doesn't make transit more convenient for riders, he'd stick with the status quo.)

But Peduto's biggest challenge, says City Controller Michael Lamb, is "the infrastructure deficit." After years of austerity budgets under state-appointed financial overseers, he says, "The city is literally crumbling. Our facilities are just deplorable." And that, Lamb says, can frustrate politicians with broad visions: "It's a challenge of limited resources - but in a broader sense, how do you stay strategically focused on getting core things done?"

"Bill's a very big-picture guy," says the SEIU's Morgan. But the challenge, he says, is "how to carry out the vision he has while also cleaning up the mess" he is inheriting. "It's a challenge many progressives stumble on."

The city's legacy problems are "what keeps me up at night," agrees Kevin Acklin, Peduto's future chief of staff. "I hear rumors of trucks that have been in the shop for months."

Some of Peduto's earlier initiatives themselves are in need of attention: The mayoral primary itself revealed gaping holes in a campaign-finance reform ordinance that Peduto had championed on council. And many other reforms that Peduto and his allies shepherded through council, ranging from tow-truck regulations to diesel-emission limits, have languished during the Ravenstahl years.

Even so, it's hard to imagine a stronger start for a mayor-elect.

Last week, Peduto unveiled a leadership team that was diverse in every sense of the word. It included both members of the Democratic old guard — like onetime/longtime Public Works head Guy Costa and former City Councilor Valerie McDonald Roberts — and newcomers like Lourdes Sanchez Ridge, a Republican whom Peduto has tapped for solicitor. As Peduto told reporters Nov. 7, the roster includes both government newcomers and old hands "who have been down the path before."

And as if to prove he could reform government without running roughshod over it, Peduto also told reporters that he supported city council hiring its own attorney, instead of compelling it to rely on legal advice from the city solicitor, who reports to the mayor. Peduto's willingness to let council seek a second opinion might seem a small change, but it's a hopeful sign if you're worried the new boss will be the same as the old.

Especially because administrations don't always end the way they began. Back in 1993, another youthful (by Pittsburgh standards) politician won the mayor's office by promising good government, and making a pledge to listen to neighborhoods. "We're going to redefine government in Allegheny County," Tom Murphy told the Post-Gazette, while promising to hold community meetings in every city neighborhood. But when Murphy left office three terms later, much of his tenure was defined by controversial investments in sports facilities and Downtown retail, often pursued in defiance of the public will.

Peduto has taken pains to disavow such ambitions. On Election Night, he pledged, "There is not going to be a Renaissance IV," citing the "top-down" approach of the city's earlier redevelopment initiatives. There are reasons to wonder if Peduto can govern in the populist style he campaigned on. But if he does, it won't be the first time he's defied the cynics ... even if doing so took longer than he intended.

"You come in feeling like you're going to conquer the world," Tom Flaherty, then the head of the county's Democratic Committee, told me not long after Peduto first took office in 2002. "Usually, you can't even conquer a ward."

Usually. But not always.