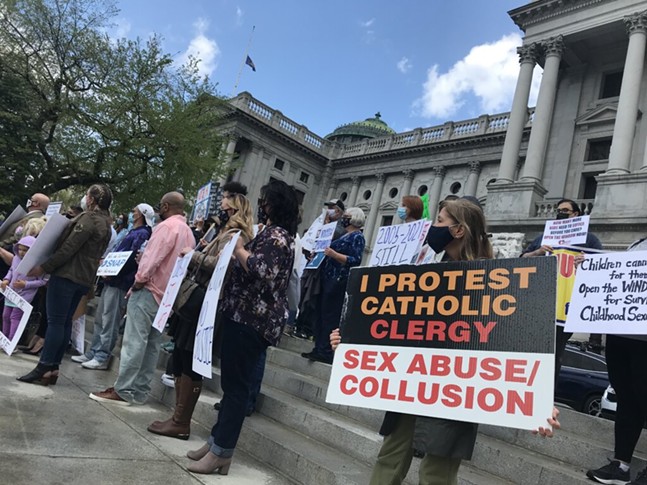 Capital-Star photo: Elizabeth Hardison
Victims of child sex abuse and their allies rallied at the state Capitol on Monday, where they pressured the Senate to vote on a proposal granting them two years to revive old cases in court.
A bill that gives victims of child sexual abuse a fresh chance to sue abusers cleared a key committee vote in the state Senate on Wednesday, but its fate remains uncertain due to opposition from the chamber’s second-ranking Republican.

The Senate Judiciary Committee voted 11-3 to approve a bill creating a two-year window for victims of child sex abuse to revive old cases in civil court. The Legislature has been considering versions of the proposal since 2018, following a string of high-profile child sex abuse scandals in Pennsylvania.

The measure sponsored by Rep. Mark Rozzi (D-Berks) now advances to the Senate floor, where it must be considered three times and pass a final vote before it can go to Gov. Tom Wolf.

But there’s no indication yet that Senate Majority Leader Kim Ward (R-Westmoreland) will let that happen.

Ward, who controls floor action and the legislative agenda in the Senate, maintains that the legislation is unconstitutional. She has not yet pledged to hold a vote on Rozzi’s bill, saying she wants to pursue the same reform as a constitutional amendment – a process that can take years.

Ward’s position had not changed as of Tuesday, her spokeswoman confirmed, despite the fact that the bill was poised to emerge from the Judiciary Committee the next morning.

The bill was not on the Senate’s daily voting calendar on Wednesday.

Ward’s opposition has landed her in the crosshairs of abuse survivors and their allies, who said at a Capitol rally on Monday that she was blocking a bill that they believe has broad support.

“The votes are there to put this on the Governor’s desk by the end of the week,” Marci Hamilton, CEO of the CHILD USA advocacy group, said on Monday.

Corman voted in favor of the bill on Wednesday morning, saying he’d made his peace with the fact that it would face legal challenges from churches, insurers and other entities who could be liable for settlements.

“I’m prepared to allow the lawyers to have their day,” Corman said during the committee meeting.

Under an amendment made earlier this month, any lawsuits challenging the policy will be fast-tracked to the state Supreme Court. The bill also waives a legal doctrine that typically limits liability for schools and other public entities, making them vulnerable to potentially limitless court settlements.

The state House first advanced a version of Rozzi’s bill in 2018. It was one of a handful of reforms for child sex abuse survivors recommended by the Office of the Attorney General that year, following the publication of a grand jury report that detailed decades of abuse and cover-up in Pennsylvania’s catholic dioceses.

But Rozzi’s bill has traditionally encountered turbulence in the Republican-controlled Senate, where a top leader stopped it from coming up from a vote in 2018.

Then-Senate President Pro Tempore Joe Scarnati, R-Jefferson, said that writing the policy into state law would violate a clause in the state constitution.

Scarnati agreed in 2019 to advance it as a constitutional amendment. That set in motion an amendment process that was set to culminate in a referendum vote this year, until the Department of State admitted in February that it made a clerical error that forced them to reset the entire amendment process.

Lawmakers scrambled to salvage the proposal this spring.

Such lawmakers as Sen. John Gordner (R-Columbia) who was one of three Republicans to vote against the policy on Wednesday, said the emergency circumstances wouldn’t change their stance that the law is unconstitutional.

But others who previously opposed the statutory bill came to support it, saying that victims shouldn’t be made to wait any longer to bring abusers to court.

“If you believe as strongly as I do that abuse victims have been denied their remedy for far too long, you’re obligated to attempt every path to deliver a just result,” Senate Judiciary Committee Chairperson Lisa Baker (R-Luzerne) said Wednesday.
Elizabeth Hardison is a reporter with the Pennsylvania Capital-Star where this story first appeared.