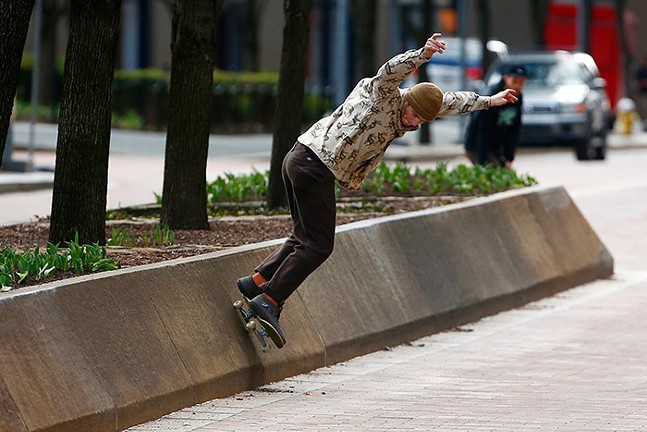 CP photo: Jared Wickerham
A skateboarder on a mostly empty Grant Street in Downtown Pittsburgh on Sun., March 15
Yesterday, Gov. Tom Wolf issued a stay-at-home order for residents of Allegheny County in the hope of curbing the spread of coronavirus. Wolf said people in Allegheny County should only leave their homes for life-sustaining reasons, and specially mentioned buying food, groceries, and pharmaceuticals.

County residents are still allowed to leave for outdoor recreation, as long as they maintain proper six-foot social distancing from others outside. But with many people out of work and places to visit closed down, these orders have led many in other parts of the country to gather in large numbers on sidewalks, trails, and bike paths. It’s pretty hard to practice social distancing on a hiking trail clogged with hundreds of people.

Bike Pittsburgh has come up with a new initiative designed to remind folks to keep their distance from others while enjoying the outdoors, and it involves taking space that was normally designated for cars, and repurposing it for joggers, cyclists, walkers, skateboarders, and others.

The bike-and-pedestrian advocacy nonprofit has proposed Social Distance Fitness Zones throughout the city. These recreational areas would be made up of “streets that can be easily closed to cars, allowing more residents and their kids to go outside for a run, walk or roll while making it easy to maintain the required 6-feet of distance from other people,” according to the press release.


As people flock to parks for fresh air, it's getting harder to get exercise while keeping our distance. Here's our idea to create Social Distance Fitness Zones in three local parks.https://t.co/S35UEVvowq pic.twitter.com/QkqKHkaoSO

Bike Pittsburgh said that these zones also have the added benefit of allowing people to exercise outside without worrying about fast-moving cars and providing enough space to keep far enough away from others.

“We are still allowed (and even encouraged) to bike and walk as long as we follow strict ‘social distancing’ of at least six-feet between other people,” the website said. “Daily exercise is an important way to remain healthy and boost immunity.”

The concept of closing down streets has seen success in Pittsburgh already. Three times a year, Bike Pittsburgh hosts the Open Streets festival which attracts thousands of visitors.

Without social distancing, one infected person will on-average pass the virus to 2.5 people within five days, according to Statista. After 30 days, the figure would rise to 406 new infections. The number can be significantly reduced if folks maintain their bubble of personal space. But following the closure of bars, restaurants, gyms, shopping malls, and other outlets that typically draw people out, Pittsburgh’s parks, trails, and other outdoor facilities have become more popular by the day.

The Pittsburgh Parks Conservancy (PPC), which manages many Pittsburgh parks, also is encouraging people in the city to maintain social distancing while enjoying the parks. The city has closed city playgrounds due to the coronavirus outbreak.

“As the weather warms up and people act on their natural desire to be outdoors as a way of coping with this crisis, more and more Pittsburghers are finding the comfort and escape they need in our city parks,” says PPC president Jayne Miller. “To ensure that they remain open and safe for all, it is crucial for every visitor, even those who consider themselves completely healthy, to maintain safe physical distance from other park users while spending time in our parks, on our trails, in open spaces, and in nature.”

With warmer weather on the radar, some cities have already begun closing roads to cars and opening them up to people, including Martin Luther King Boulevard in Philadelphia. Bike Pittsburgh proposes that this method would encourage people to get out and exercise without compromising social distancing policies. The group is also suggesting that Allegheny County Parks consider similar measures of closing down some roads to allow more space for social distancing.

“If last weekend is any indication, the County Parks should also consider this move with the influx of people attempting exercise within limited and constrained spaces,” the Bike Pittsburgh website said. “So how about it, can we get some Social Distance Fitness Zones ready before the spring weather brings everyone out?”