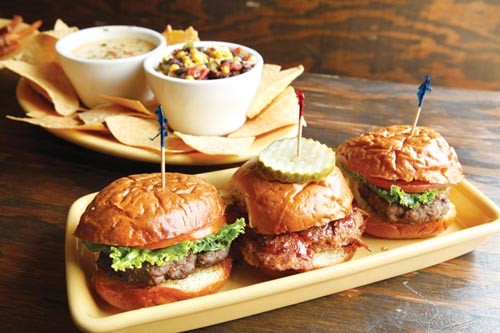 Grandview Avenue is indisputably the front-row seat to the best view in Pittsburgh -- even, according to USA Today, the second-best view in the country. There's a reason the avenue is lined with fancy restaurants and diners out on special dates.

But until recently, very few non-locals ever penetrated the actual neighborhood behind the vista. The restaurants and shops of Shiloh Street have recently begun to beckon sightseers away from the overlooks and toward a tempting array of tasty -- and thirst-quenching -- offerings. But farther into Mount Washington, the neighborhood, while welcoming, still belongs to those who call it home.

Bigham Tavern is an example of a Mount Washington establishment that, under a history of names and ownerships, has long functioned as a highly local gathering spot for food, drink and that favorite Pittsburgh pastime, watching sports. Unlike a lot of sports bars, the Tavern's decor is fairly restrained: In place of banners, posters and a black-and-gold paint scheme, we found dark-stained wooden booths, white walls and octagonal windows silhouetted with team logos in understated black.

Well, that and about the highest TV-to-seat ratio we've ever seen. It may be that there's not a single seat in the house without an unobstructed view of a screen. During this surprising Summer of the Bucs, that wasn't an entirely unwelcome thing (especially as the Pirates won the night we visited).

But it wasn't the TVs that drew us, but rather the menu, which was overhauled -- along with the name and the vibe -- by the Tavern's newest owners. It's still pub grub, to be sure, but with burger toppings such as capicola and green peppers, Bigham Tavern seems to be consciously offering more than ballast for beer drinkers. This was pub grub with a palate.

We especially liked the Southern-style chicken strips, a variant on ubiquitous chicken fingers with a much more flavorful crust. If some bites offered too much of a good thing, with seasonings threatening to overwhelm the not-insubstantial meat, it was hard to complain about the kitchen's ambition to add some cluck to a chicken preparation that is so notoriously bland, it seldom sees above the rim of the kids' plates.

Bigham Tavern's immediate predecessor purveyed a legendary Wednesday wing special, and this has been justly held over. Original, hot, garlic and BBQ are just the beginning; the array of sauces was dizzying, and went well beyond the standard variations on the above themes. In particular, red curry-peanut was a brilliant choice, linking a classic American bar snack to the traditions -- and flavors -- of Asian street food. The flavoring was an adventurous success, the earthy peanut slightly mellowing the spiciness of the curry.

Jason's cheeseburger was big and well-browned, but most remarkable for its toppings: fried onion and Swiss cheese in perfect proportion. There was sweet, tender onion in every bite and plenty of nutty Swiss flavor, all on a bun that was big and hearty without being gum-punishingly crusty.

Unfortunately, the felicitousness of this combination was not echoed in Angelique's cheesesteak, whose ratio of meat to bread was unsatisfying, and whose dose of molten provolone didn't deliver enough salty creaminess to bind the disparate flavors of steak, peppers and onions.

At Pittsburgh bars, of course, it's always Lent, and so we tried Bigham's beer-battered fish sandwich. The crust was crisp and light, making for an enjoyable meal, even if the fish within wasn't perfectly moist.

Every sandwich was accompanied by a choice of fries, which here deserve special mention. Bigham Tavern's curly fries were classic, with well-seasoned crisp exteriors, while its sweet-potato fries were dusted with sugar instead of salt to enhance their native sweetness. This was an original touch we appreciated, even if it did not make us want to throw over salted sweet-potato fries forever.

With better-than-average bar food plus an extensive beer selection, jukebox and pool tables, Bigham Tavern offers all the pleasures of a neighborhood pub in a neighborhood best known for dress-up, date-night venues.