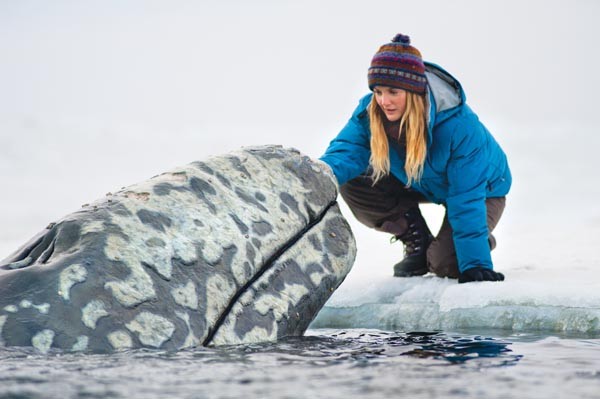 It's October 1988, and at Point Barrow, the northernmost tip of Alaska, three California gray whales are trapped under the ice, five miles from open sea. When their breathing hole freezes over, the whales will die — unless they are somehow rescued.

Ken Kwapis' comedy Big Miracle recounts this still-a-bit-goggling true-life episode: how the whales' troubles became known; how the international news media descended on the tiny, hardscrabble Arctic town; and how native Inupiat, big oil, Greenpeace, the National Guard, the Soviet navy and a couple of guys from Minnesota banded together to free the whales. Big Miracle has a sprawling cast, but the narrative is driven by an Anchorage-based TV reporter who breaks the story (John Krasinski) and his ex-girlfriend and Greenpeace activist (Drew Barrymore).

It is a pretty good cat-up-a-tree story (as one reporter initially dismisses it). These whales did get trapped in an exotic location, loads of people worked to free them and, against all odds, there was a happy ending. That's checking more than enough boxes for Hollywood to churn out a winsome family-friendly movie.

Yet, Big Miracle is adapted from Thomas Rose's 1989 book, Freeing the Whales: How the Media Created the World's Greatest Non-Event, which was far more cynical than this feel-good film. Kwapis sneaks in a few wry throwaways about the ridiculousness of the situation, but to contemporary viewers, they are as inconsequential as single snowflakes in a storm.

Because the film can't re-create what was so bizarre and fascinating in 1988: The two-week rescue of these whales dominated television in a manner that was then unprecedented. It hit that sweet spot that combined the ascendancy of 24-hour cable news, technology that allowed for easier live reporting from the middle of nowhere and the public's affection for manufactured melodrama. Coverage begat more coverage, then coverage about the coverage and so on. Nightly news led with the whales, and even President Reagan weighed in. Lost was any sense of perspective: Animals get trapped and die all the time.

Today, of course, such wall-to-wall coverage of a random non-event seems to happen once a week, and is thus unremarkable. A quarter-century of even more frivolous media has taken the edge from the original story-about-the-story. Thus, Big Miracle is an even more-media-friendly accounting of the event, full of smiles, pretty people, goodwill and happy endings. Go ahead and cheer for the folks who carved a path through the ice that led the whales to freedom, but don't forget: It was the telegenic ordeal of those same whales that led us to the non-stop non-news we endure today.