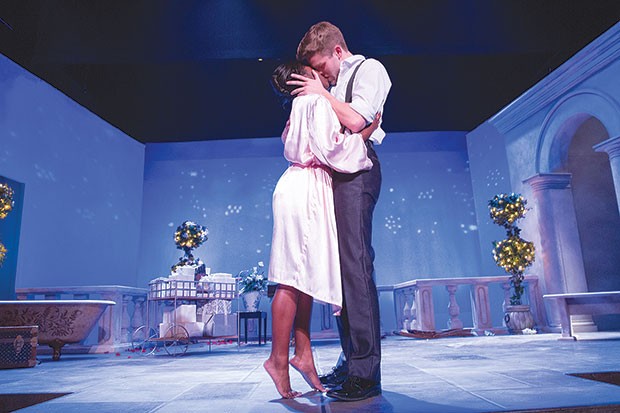 continues March 9-12. Pittsburgh Playhouse, 222 Craft Ave., Oakland. $10-24. 412-392-8000 or pittsburghplayhouse.com
To recast Joseph de Maistre’s famous maxim: “Every age gets the revival of Greek tragedy that it deserves.” And with Point Park Conservatory Theatre Company’s production of Charles L. Mee’s 2000 play Big Love (based on Aeschylus’s fifth-century B.C. The Supplicants), we do get what our age deserves. It’s fun. It’s entertaining. But it’s not profound. It adds nothing valuable to the original, like modernizing a classic black-and-white film through coloration.

As in the ancient version, 50 sisters are engaged to marry their 50 cousins, but run away, in this case from Greece to Italy. The sisters are represented by just three actors: Markia Nicole Smith (Lydia), Saige Smith (Olympia) and Amber Jones (Thyona). Their rendition of “You Don’t Own Me” (the Leslie Gore song) is a musical highlight of the show. And becomes about as philosophical as the didactic messaging gets.

The brothers — Nate Willey (Nikos), Charlie Rowell (Oed) and Drew Campbell-Amberg (Constantine) — also sing, roll around with muscularity, and have some moments that could be mistaken for primal therapy.

Director Reginald L. Douglas’ staging is big and rowdy. Dishes are smashed, pianos are pounded, and jaws are dropped.

Although many of the characters are modern creations, most are mere caricatures, especially Guiliano, the gay, Barbie-and-Ken-doll-collecting grandson played with humor by Gabe Florentino. (Why do so many contemporary playwrights choose to portray gay men as flamboyant clichés?) And Bebe Tabickman (Bella), in the grandmother role, sounds like the old SNL character Roseanne Roseannadanna, while paradoxically the rest of the Italian players have no accents.

Gianni Downs’ Mediterranean set is well complemented by Andrew David Ostrowski’s lighting, which evolves from day to evening to night like a gentle, crepuscular painting giving birth to itself. Steve Shapiro manages to evoke a panoply of sounds, from distant swooping gulls to the rowdy soundtrack comprising Lady Gaga and several pop songs.

While the marriage night does not go well for most of the brothers (there will be blood), The Beatles remind us in the end that “All You Need is Love.” Certainly true, but not the most profound conclusion. It seems our age has not added much to this story after 2,500 years.