Tim Burton's latest film, Big Eyes, is both a bio-pic of Walter and Margaret Keane, 1960s artists famed for their sentimental "big-eye" portraits, and a celebration of the space such works inhabited: the oft-sneered-at lower rungs of popular culture. It's also a bit of a legal thriller and a mild critique of the challenges faced by women — even creative and hard-working ones — in the 1950s and '60s.

If you're burned out on Burton's usual fare — pointless remakes, tarted up with extravagant sets and a bewigged Johnny Depp — come forward. This is Burton's most enjoyable film in years: a straightforward story that's amusing and heartfelt on the surface, with additional thoughtful layers for pondering the nature of art and commerce. The acting, the sets, the dialogue, the candy-color-saturated film — everything teeters on the kicky edge of silly without succumbing to it. 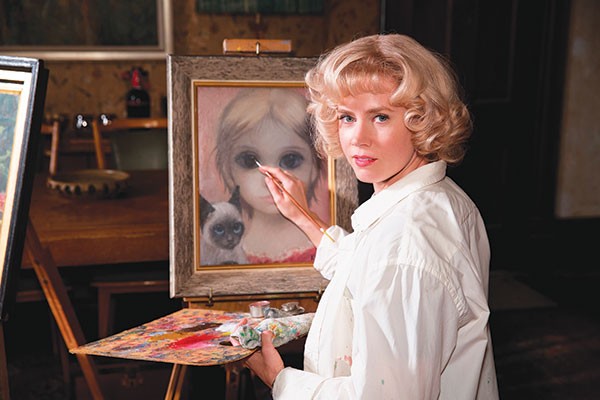 The eyes have it: Margaret Keane (Amy Adams)

The tale is simple: In the late 1950s, divorced single mom Margaret (Amy Adams) moves to San Francisco and, there in its Beatnik poseur belly, meets artist Walter Keane (Christoph Waltz). Walter paints generic Paris street scenes, but encourages Margaret with her portraits of doe-eyed kids and stray cats. The glib Walter is a better pitchman than artist, and it is simply more convenient for him to take public credit for the increasingly popular big-eye works that Margaret dutifully turns out. And so it goes for nearly a decade, until Margaret pushes back — and you won't believe how the courtroom drama plays out.

But this isn't just a domestic melodrama and art fraud, because the means of production matters a lot here. The Keanes' fortune is amassed by churning out cheap poster and cardboard facsimiles of the paintings, not in the selling of original works. Such marketing secures the big-eye works widespread popularity, and represents one form of value.

Burton, a noted aficionado and producer of popular entertainment, cheerfully celebrates this low-brow populism. The film quotes Warhol: "I think what Keane has done is just terrific. If it were bad, so many people wouldn't like it." (Full disclosure: I once owned and displayed in my home more than 50 pieces of big-eye art.)

These days, popular "bad" art that people like — from Thomas Kinkade to meme-generating apps — carries a far bigger stick than fine art, and while the disagreements linger, the cultural skirmishes are few. In our times, Walter's keen appreciation for mass marketing, ancillary products and media manipulation would be celebrated.

Big Eyes notes this appreciatively, despite Walter's obvious villainy. But the film reserves its full-throated support for Margaret, for women in art, for artists to be rightfully acknowledged and compensated. And for all of us who simply like what we like, no matter how kitschy, or high-minded, it is.