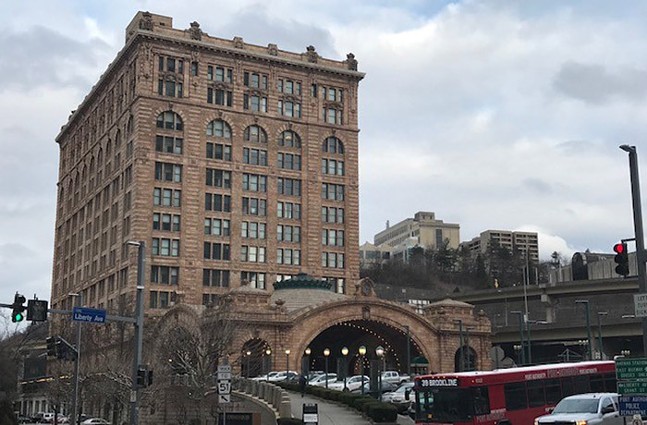 CP photo: Ryan Deto
The Pennsylvanian building, which sits above Pittsburgh Union train station
After President Joe Biden announced his $2 trillion infrastructure plan on Wednesday, it was all aboard the hype train for rail fans across Pennsylvania.

The plan, which aims to repair roads, replace every lead pipe, and expand broadband access, also makes an $80 billion investment in Amtrak, a corporation owned by the federal government to operate passenger rail in the United States.

The rail system “has a bold vision to bring energy-efficient, world-class intercity rail service to up to 160 new communities across the nation, as we also invest in our fleet and stations across the U.S.,” CEO Bill Flynn said in a statement released on Wednesday night.

Among those new communities are three smaller Pennsylvania metropolitan areas — Allentown, Reading and Scranton — where local leaders have talked for decades about bringing rail service back to town.

The proposal was met with support from community groups, as well as bipartisan enthusiasm from state legislators.

“Any expansion of passenger rail is smart policy,” said Scranton-area Democratic Rep. Mike Carroll, of Luzerne County, and the ranking Democrat on the House Transportation Committee. He added that the federal investment is a “wonderful starting point.”

But Carroll and others added that the initial excitement must be tempered by political reality.

The expansion of service will require both cooperation with outside entities — either other states or private freight rail companies — as well as increased annual state transit spending, as Pennsylvania struggles to afford the bare minimum repairs for roads and bridges.

The commonwealth pays millions of state tax dollars to Amtrak every year to run multiple trains a day between Philadelphia and Harrisburg, and one train a day in both directions between New York City and Pittsburgh, by way of Philadelphia.

“In the coming weeks, Amtrak will present to Congress our reauthorization plan that will include expanding service in key city pairs that are not served well by passenger rail today,” Toll said in an email.

As of right now, the single roundtrip requires anyone who might take the train from Altoona or Johnstown to a doctor’s appointment, business meeting, or sporting event in Pittsburgh to spend a night in the Steel City.

“The ability to do that daily commute to Pittsburgh would unlock incredible economic potential for central and western Pennsylvania,” Schmitt said.

Such service would increase demand, he argued, as residents would see trains as a viable option. Also, the rise of teleworking and hybrid schedules could increase the market of individuals looking for such flexibility.

Running extra trains on this existing line would still cost the extra state every year. But the proposed federal investment, argued Schmitt, could help convince leery Republicans to increase revenues to pay for it.

“If the federal government is going to make that kind of investment, it makes it easier to say ‘Pennsylvania has to do its part,’” he said.

But expanding Pennsylvania’s rail service isn‘t just a matter of dollars and cents. It’s also about who owns the tracks.

Under federal law, Amtrak has a right to run its trains on any route in the country. When the track is privately owned, Amtrak typically signs a lease to regulate its usage, and pays rent to the host railroad.

For instance, multiple passenger trains a day run between Harrisburg and Philadelphia on rails owned by Amtrak. But the tracks used to continue on to Pittsburgh are owned by Norfolk Southern, a private freight company.

The company claims that its mainline between Pittsburgh and Harrisburg is too busy to handle any more passenger trains.

The state expects results from a study commissioned in 2019 to look at the impact of more passenger rail on Norfolk Southern’s freight traffic later this year.

Amtrak also would likely need to work with Norfolk Southern to expand service into the Lehigh Valley and to Reading.

Service to Scranton, meanwhile, would be accomplished in conjunction with New Jersey Transit.

The Garden State must rebuild about 30 miles of track in northern New Jersey to connect Scranton to New York City. But New Jersey only has allocated funding for seven of those miles in the next decade.

This helps show that using existing infrastructure, rather than building expensive new rights of ways, would be key to bringing those rail connections out of power points and into reality.

Kevin Murphy, president of the Berks County Community Foundation, pointed to a study released last July that estimated it would cost $356 million to bring rail service to Reading. That includes a lease with Norfolk Southern, repairing stations, and purchasing trains and rail cars.

That price tag is just a fraction of the $2 billion-plus that a decades old study estimated it would take to lay down new tracks into the city.

“I can solve any problem in this region if you give me $2 billion a year, but this is so much economically reasonable, and, economically, more rational,” Murphy told the Capital-Star.

The line would also relieve pressure on the region’s jammed roadways.

But all this requires the cooperation of Norfolk Southern, which isn’t guaranteed.

The company “does not intend to participate in this conversation at this time,” a spokesperson said in an email Thursday.

One other variable is also still in the way of rail enthusiasts hopes: congressional approval.

The $2 trillion price tag, funded by increased corporate taxes, is unlikely to get Republican support in Washington D.C. Democrats can pass legislation without GOP support, but it will likely require months of negotiation and compromise.

Also, the proposed tax increases raised concerns with some who’d stand to benefit from the new infrastructure.

In a statement, the Greater Reading Chamber of Commerce’s head of government affairs, Katie Hetherington Cunfer, said a Reading-to-Philadelphia rail connection would create $1.4 billion in new income, and increase property values by $1 billion.

But the tax increases to pay for the new investments “threatens our economic recovery and unfairly and inequitably targets businesses and employers,” she added.

Despite these uncertainties, Biden’s announcement is still the most confident Murphy has ever been to make his daydreams of a zooming past gridlock on the Schuylkill Expressway by train come true.

Biden’s proposal “feels so much more viable,” Murphy said. “The president has a deep commitment to passenger rail. And you have these economic pressures. There’s so much growth in southeastern Pennsylvania.”

“When it’ll happen, I don’t know,” Murphy added, “but it feels inevitable.”


Stephen Caruso is a reporter with the Pennsylvania Capital-Star where this story first appeared.