Beyond: Microtonal Music Festival showcases the widening landscape of the genre

"Whether that's microtonal is up for debate. That's where the ‘Beyond' comes in."

The world of microtonal music scored a major coup at the 57th annual Grammy Awards when the Best Classical Compendium was awarded to Plectra and Percussion Dances, an album of music written by Harry Partch. The late composer utilized his own 43-note scale and built his own instruments to play the music.

Four years ago, Music on the Edge staged a performance at the New Hazlett Theater by Newband, a group that plays Partch's music on his original, unique instruments, such as Cloud-Chamber Bowls and Diamond Marimba. The event sold out.

This weekend, MOTE presents Beyond: Microtonal Music Festival, a three-day program of performances and symposia, including premieres of new works. That Grammy came at a perfect time. Microtonal music has "moved into the mainstream rather quickly," says Mathew Rosenblum, MOTE's co-director. "In the '20s and '30s, it was just a couple of fringe composers doing this stuff. Now there are Indonesian pop bands that consider themselves microtonal. So there are folks doing it all over the place." 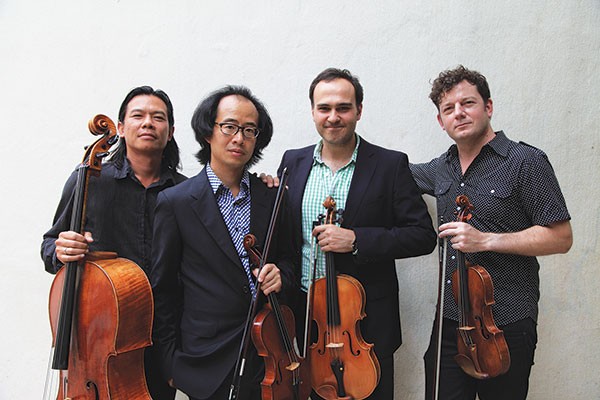 Rosenblum explains that microtonal music is a Western term that incorporates virtually any music that uses a set of pitches larger than the "well-tempered" approach. Since the days of Bach, Western music had used the 12 tone setting, which can be seen on the piano as the distance between two C-notes — seven white keys and five black keys, in this case.

Microtonal composers use a larger sound spectrum. "Some people create a 19-note equal division. They'll be 19 equal steps. Or some just cut the 12 [tone scale] in half and you've got 24 equal steps," he explains. "But there are other people that use what's called just intonation, which uses intervals that come from the natural overtone — acoustically sound intervals that are found in the physics of sound."

The program includes pieces like Michael Gordon's Timber, a composition for six amplified 2-by-4s, played by Mantra Percussion. Like many of the performances, it takes place in the entrance of The Andy Warhol Museum, where musicians and audience will be in a circle, with an accompanying light installation. "It's an amazing thing, like a ritual, to watch these folks, from memory, play this piece that ebbs and flows," Rosenblum says. "Whether that's microtonal is up for debate. That's where the "Beyond" comes in."

Among the other pieces, Mantra Percussion and FLUX Quartet will premiere a Rosenblum piece that includes tuned pipes, which were built to specification for this performance.

Rosenblum believes a larger audience exists for this music. "I really want to try and build a community in Pittsburgh as well. I know there already is, and some of them don't know they are. They listen to it and they like it, but they don't have a name for it," he says. "Doing it at The Warhol, the idea is to open it up to new audiences, different art audiences, so we can have a diversity of listeners."