Beyond Limits: Campaign-finance reform was supposed to level the playing field in local elections, but $2.5 million raised in mayor's race shows it was the same old ballgame | News | Pittsburgh | Pittsburgh City Paper

Beyond Limits: Campaign-finance reform was supposed to level the playing field in local elections, but $2.5 million raised in mayor's race shows it was the same old ballgame

"There are always going to be undue influences in these situations" 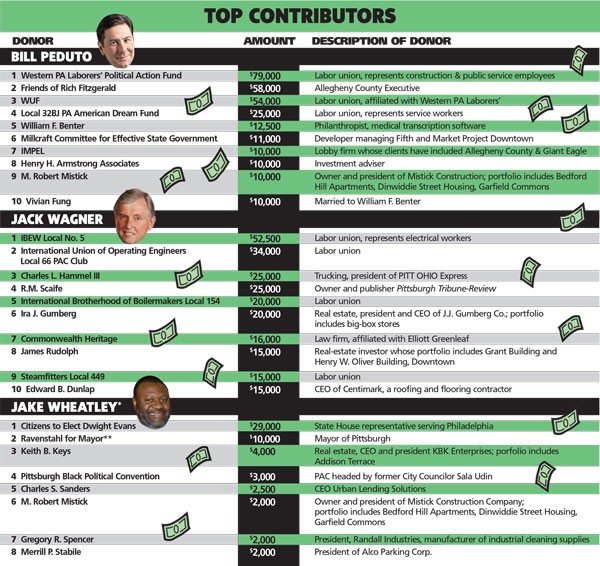 * As of July 24, Jake Wheatley had not filed a complete 30-day, post-primary report with the Allegheny County Elections Division, leaving his donor list and amounts received incomplete.

** The contribution from Mayor Luke Ravenstahl's PAC was not disclosed in Wheatley's campaign-finance reports, but was reported as a contribution by the PAC itself, and Wheatley confirmed its acceptance.

Philip Ameris, president and business manager for the Laborers' District Council of Western Pennsylvania, is short and to the point.

"We did what we had to do," he says when asked about the $133,000 the council's political action committee and a related PAC, WUF, gave to Pittsburgh City Councilor and Democratic mayoral nominee Bill Peduto during his primary campaign.

That money accounted for 11 percent of Peduto's campaign war chest, the largest contribution from any one source. But it isn't the only eyebrow-raising contribution received by Peduto or his opponents, former state auditor general Jack Wagner and state Rep. Jake Wheatley, according to a review of contributions conducted by City Paper.

There is more than a little irony in those findings. This year's mayoral race was set to be the highest-profile test of the city's 2009 campaign-finance law, which sought to limit the influence of large-dollar contributors. But those limits — $4,000 for individuals and $8,000 for committees — were lifted April 3 by Allegheny County Common Pleas Judge Joseph James. Within days of that ruling, money began flooding in.

To determine the effect of lifting the limits shortly before the May 21 primary election, CP reviewed the final campaign-finance reports recently filed by the committees People for Peduto, Friends of Jack Wagner and Jake Wheatley 4 Mayor.

State Rep. Jake Wheatley, who was third in the race and whose campaign-finance reports are incomplete, raised at least $74,080. A little more than half of that came from two donors: $29,000 from state Rep. Dwight Evans (who serves Philadelphia's District 203) and $10,000 from Pittsburgh Mayor Luke Ravenstahl, who chose not to run for re-election, but worked hard to defeat Peduto.

Of the total contributions to all three candidates, about 21 percent — or $536,376 — exceeded what the limits would have been had they not been lifted by Judge James.

Peduto authored the original campaign-finance reform law and had filed a court challenge to his opponents' use of personal resources and campaign contributions collected in previous races where limits were not in place. But he says he benefited from the judge's decision.

"Whatever the rules are, you adapt your game to them," Peduto says, adding that his campaign intended from the beginning to hit a $1.2 million goal. But instead of spending the time collecting that from a broader base, Peduto says, the contributions — particularly those of the labor unions — "meant I had more time to be out in the field."

In the court's decision lies another irony. The campaign limits were voided thanks to a candidate who was no longer in the race: City Controller Michael Lamb, who dropped out April 1.

But by that point, Peduto had already filed the legal challenge against the accounting practices of both Lamb and Wagner. Unhappy with what he called the ordinance's "poorly written" language, Judge James ruled that Lamb had at one point financed his campaign with $52,000 from his own pocket, running afoul of self-financing provisions in the ordinance. Under the provision — which was intended to keep candidates on a level playing field with wealthy rivals — if a candidate used more than $50,000 of his own money without declaring an intention to do so in advance, the limits on all candidates would be lifted.

Lamb says that rule was never violated. A $2,000 contribution he gave the campaign was refunded before the $50,000 loan was extended, he claims.

"There was never a period of time when there was more than $50,000 in the account," he says. But he was not called to testify to that fact. Other possible flaws in the law, although debated, were not addressed by the court.

In court and outside of it, both mayoral frontrunners professed a desire to keep the limits in place. But lifting the contribution limits doesn't appear to have provided a significant advantage for either of them. Peduto raised 4 percent more than Wagner, but Peduto had begun fund-raising in September 2012; Wagner entered the race in March, after Ravenstahl's surprise announcement that he would not seek re-election.

Still, after James' ruling, Wagner generated $260,000 in contributions that exceeded the now-defunct limits. Peduto raised almost as much.

Had the rules stayed in place, would it have made a difference?

"It's a very difficult thing to analyze," says Wagner, who received about 40 percent of the Democratic primary vote, compared to Peduto's roughly 52 percent. "I don't think, in all frankness, that changes during this particular race would have changed the outcome."

Even Wheatley says the limits would have done little to help his campaign.

"Bill Peduto had [Allegheny County Executive] Rich Fitzgerald, who helped him raise money, and the SEIU and other big labor unions," Wheatley says. "Jack had his own statewide [network], and he had pretty much a lot of corporate Pittsburgh. If you don't have some established entity [helping], or you're not an established entity, it's hard to break in — with caps or without caps."

And, "let's be frank," he says. "There are always going to be undue influences in these situations, caps or no caps."

Indeed, the campaign-finance law wouldn't have reined in one of the biggest spenders in the campaign: Mayor Ravenstahl's Committee for a Better Pittsburgh, which spent its cash on independent ads targeting Peduto. Independent expenditures, as opposed to money given to a candidate, are not governed by the law.

"There were some very significant contributions in this race by organizations that have a strong interest in city operations," says Lamb.

The law, as it is, "is one of the worst constructed pieces of legislation I've ever seen," he says. "But we need it. We need limits."

Unions, for example, were among Peduto and Wagner's largest single donors, accounting for 14 percent of their contributions. Union workers stand to benefit from city jobs and construction projects such as the North Shore redevelopment and other public projects overseen by elected officials.

Wagner won the backing of the city police and firefighters' unions, but much of his union support came from building-trades locals like plumbers and carpenters. Wagner's top contributor — at $52,500 — was the International Brotherhood of Electrical Workers Local 5. Representatives of the union did not respond to a request for an interview.

Peduto got backing from city paramedics, as well as the Service Employees International Union. But the Laborers were far and away his biggest supporter.

"[Peduto] has a lot of the same interests that we have," says Ameris, of the Laborers' District Council. "The money was a byproduct of that."

Of the Laborers' largesse, Peduto says: "Quite honestly, they put their necks out to help us win this race."

Fitzgerald, who also topped Peduto's list of contributors with a $58,000 donation, says it's fair to ask what donors want in return for their money. But that doesn't mean candidates can be bought and sold: "It comes down to the candidate: who they are taking the contribution from and why they are taking it. To rule them all the same wouldn't be accurate."

Fitzgerald says what he wants for his money is simple: "I just want to have a partner — not to do what I say or what my administration says, but someone we can work with."

Bob Ewanco, a lobbyist and owner of Impel Strategies, who gave Peduto $10,000, echoes that sentiment. He says Peduto's ideas impressed him.

"That was a significant amount for me, believe me. I'm no big corporation," he says.

But he acknowledges that it doesn't hurt his clients — Giant Eagle among them — if he has a relationship with the city's next mayor, he says.

Peduto, for his part, says, "It is foolish for any elected official to say that money doesn't influence access. Obviously that's why people contribute, that's why they volunteer."

But he says the number of contributors to his race — more than 1,300 committees and individuals combined — would make it difficult for any one donor to have undue influence. "There's only a certain amount of time in my life that I could offer access," he says.

Peduto says he doesn't expect the size of the contributions to play a role in how he makes decisions if he is elected in November. Peduto still must face Republican challenger Josh Wander (who raised $750 during the primary, according to his reports), and the possibility of an independent challenge by Council President Darlene Harris.

As for whether another attempt at campaign-finance reform is in the cards, Peduto says he'll leave that to his colleagues on council.

"I would hope that [they] would feel the need to put it back and make it right," he says. "I'd support it as long as it followed the original intent and spirit of the original bill, to ensure no one has undue influence."