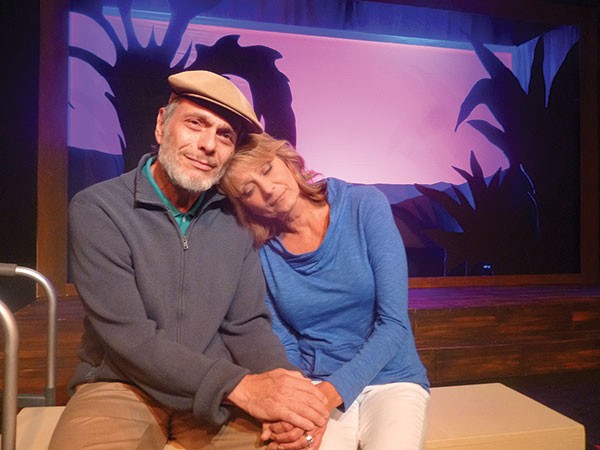 South Park Theatre mines its strengths and hits its demographic with the quirky Better Late, positing a romantic triangle of interesting people in what we once called “their golden years.” Co-written by Larry Gelbart with grittier playwright Craig Wright for a 2007 world premiere, Better Late (pun intended?) probes questions of old age and death. Gelbart, the comic genius best known for Broadway’s A Funny Thing Happened on the Way to the Forum (1962), TV’s M*A*S*H (1972-83) and Hollywood’s Tootsie (1982), died two years later.

The premise presents two sequential couples: the first and second marriages of an erstwhile actress and babe. The former relationship produced a son, now grown. The latter, still long-running, is strained when the wife insists upon providing transitional care to Hubby No. 1 after his stroke. Of course, the “temporary” arrangement stretches into months, allowing the resentments of both husbands to fester and burst. Meanwhile, the son wants attention and guidance for his own marital difficulties.

Nominally, all the characters are equal, but it’s really Hubby No. 2 at the center. Bob Scott as Lee Baer, a successful film composer (i.e. a creative type), is not only the most sympathetic of this self-centered lot, but also the one who grows the most. Opposite him, the pert Cindy Swanson packs power and sex appeal into the most dominant character, wife Nora (no Doll’s House here). Ken Lutz hits the perfect whine in the first act as the ex, Julian, but it grows a bit thin at the story proceeds. Elliott O’Brien does what he can with the hapless role of the hapless son.

The problems of wealthy divorcees might not be the most accessible of themes, but the insights into marriage and mortality, leavened with touches of merriment, make Better Late worthwhile.