"Writing songs has always been the most important thing to me." 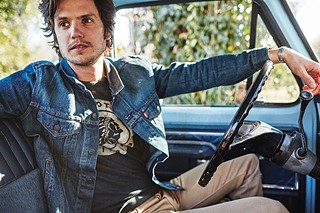 When he was in high school, singer-songwriter and Bethel Park native Steve Moakler played music all over the Pittsburgh area. After finishing high school in 2006, he moved to Nashville and began a career as both a performer and a songwriter. He has written for mainstream country artists like Dierks Bentley and Kellie Pickler, and currently has a new solo record in the works. He spoke to City Paper

Talk about your background a bit: You grew up in Pittsburgh and moved to Nashville after high school?

I started writing songs and had a couple bands in middle school. I was always the lead singer and songwriter, and we took it as far as we could as a high school local band. I was offered a small, independent record deal and ended up turning it down and moving to Nashville. I went to college there a couple of years, and that was my gateway into the city. I went to class during the week, toured on the weekends and wrote songs. I dropped out of school after a couple years. My career has been a slow, but steady, climb so far.

Pittsburgh has a pretty active music scene. What made you decide to head to Nashville instead of staying here?

My first love is songwriting, even more than performing. There were a few artists in Nashville that weren't country artists, but were part of this cool, independent, rootsy pop singer-songwriter scene and that drew me there. Nashville is a lyric town, and writing songs has always been the most important thing to me.

How do you describe your music to people? You've written songs for mainstream country acts, but do you lean that way as a performer?

I've struggled with this a bit, actually. I think country at this moment in time is a very abused word, and it means a lot of different things. To me, country is mainstream, pop, singer-songwriter with twang-type music. Country is also such a songwriter's format. It's not about the sound or innovative production methods — it all comes down to the melody and the message.

This is my second club tour as a headliner. This is really a grassroots thing. We never had a song on the radio or had any type of press before. For the past four or five years, my entire team has consisted of me and a friend who was my manager. But we parted ways and I now have an amazing team. We'll be making a new record this spring and, honestly, we're starting to move toward that mainstream country sound. While I struggle with the word sometimes, I think that's the audience for what we're doing.