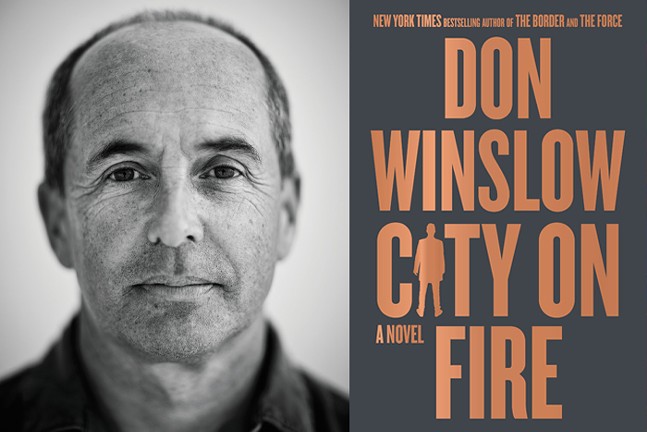 Photo: Robert Gallagher
Don Winslow
With the publication of his latest novel City on Fire (William Morrow), Don Winslow’s writing career has come full circle. The first of three books featuring Irish and Italian characters involved in organized crime, the stories are set in Rhode Island, where Winslow was born.

That circle, at least for now, is closed. In April, the bestselling author of The Cartel and The Power of the Dog announced he was retiring as a fiction writer. Through his YouTube channel Don Winslow Films, he plans to produce short videos striking back at what he perceives to be extremist views that threaten the foundations of American democracy.

“I think we're at a crisis point in our democracy and our society,” Winslow says during a phone interview, “and we're going to go one of two ways. We are either going to guarantee equal rights for everybody regardless of race or gender or sexual orientation, or we're going to slide into this sort of shoddy fascism that the Trump administration represents. So, looking at the world right now — and I think having come sort of full circle with my writing —- I just thought it was time to devote myself full-time to that fight.”

Set in the 1980s and inspired by The Iliad, City on Fire follows Danny Ryan as he attempts to navigate a life of crime while maintaining some semblance of a moral code. The son of a former leader of Providence’s Irish mob, Danny more or less lives with the Murphy clan when his father, ravaged by alcohol abuse, is forced to step aside.

The loss of status is not lost on Danny.

Instead of being a prince, Danny is some kind of minor duke or something, Winslow writes.

Danny’s loyalty to the Murphys sometimes clashes with his principles. Not to mention that his income is diminished.

“I think Danny's tragic flaw is loyalty,” Winslow says. “He's got loyalty to the Murphy family that sort of adopted him. … He has loyalty to his ethnicity, his neighborhood, certainly loyalty to his wife, his kid, and even to his dad, who he doesn't even like, though, because he was so neglectful. And I think that loyalty causes Danny to do things that he knows he shouldn’t do.”

When a mysterious woman — a nod to Helen of Troy — appears, she drives a wedge between Providence’s Irish and Italian factions. Danny frantically tries to hold everything together, his methods often questionable, but in service to what he believes is right.

In some ways, Danny is reminiscent of other Winslow characters — DEA agent Art Keller from his Cartel trilogy, retired hitman Frank Machianno from The Winter of Frankie Machine, and Boone Daniels, the private investigator/surfer from The Dawn Patrol and The Gentleman’s Hour.

“I think that the central question for me in crime fiction, and for these characters, is how do you try to live decently in an indecent world?” Winslow says. “And I think that question is always on the minds of these characters as they try to negotiate their way through these things. What is the right thing to do? What is the wrong thing to do? It's not always clear cut, there's no bright line.”

There is clarity, however, about Winslow’s next project. Don Winslow films has already produced short videos ranging from The Truth About Ivanka to Texas’ War on Women to America Needs Pennsylvania, the latter a collaboration with Bruce Springsteen. They are short, hard-hitting, and direct, a means to counter conservative talking points and attacks.

“These people on the right wing are bullies,” Winslow says. “They’re very, very tough until you punch them in the nose, metaphorically speaking, of course, and then they’re not so tough anymore.”

He adds that he was “very heartened” by Mich. Sen. Mallory McMorrow a few weeks ago when they were teasing her about grooming kids to be sexually abused.