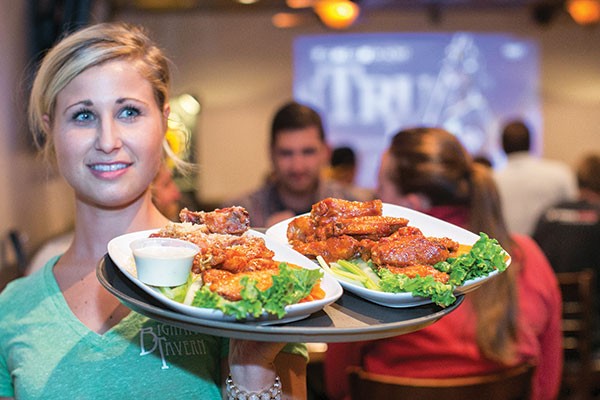 At lunchtime on a Wednesday, Bigham Tavern is starting to fill up. The Mount Washington eatery isn't exactly well-placed for foot traffic: "It's a kind of long walk from the Mon Incline, and a hilly walk from the Duquesne," notes co-owner Amelia Yoder. And from a block or two away, the venue almost looks like just another house in the mostly residential neighborhood. But those who are hip to Bigham (and that's a growing crowd) know: It's wing night.

Wednesday's wing night — a slight misnomer, since it starts when the bar-restaurant opens, at 11 a.m. — is a tradition inherited from the previous occupant of the Bigham Street building, Kaib's. It was one of a few holdovers kept by the current owners when they took over four years ago. (The ownership group consists of West End lawyers Joey Rewis and Brad Yoder, their wives, Jessica Rewis and Amelia Yoder, and Terry Malsch.)

"Happy hour was always 5 to 7 at Kaib's, and wing night was Wednesday, and it was important that they kept that," says Sarah Wilderman, Bigham's marketing director.

"One thing about Bigham Tavern is, our regulars — they basically think they own the bar," she adds with a laugh.

While wing night was always popular, it's risen to the next level in recent years. And it's little wonder: While there's a big menu of sauce options (which is crucial), the real key to Bigham's chicken-wing domination is the wings themselves. Crispy on the outside, tender on the inside, they'd be a treat served plain. The "BT original" sauce is the most popular, says Wilderman — mild with just enough kick, it's a winner.

With flavor choices from garlic-parm to bourbon, Bigham goes for variety in its sauces — but those who seek heat won't be disappointed. "For a long time, we've had our atomic sauce, which ... is a balance of heat and flavor. We had some requests, though, so we came up with 'cluckin' hot,' which is a spin on the atomic with pureed habañeros."

Despite being tucked away, Bigham isn't that far a hike for wing fans. Even at noon, the regulars are taking their spots at the bar, and others are walking out with dozens of wings to go. And by evening, forget about it. "I tell folks to get here before 5," says Amelia Yoder. After that, the wait for a table can approach or even exceed an hour.

And more people in the seats means more wings in the fryer: Just a few weeks ago, Bigham broke its previous record for number of wings served in a day, with a total of 5,732 wings on one Wednesday.

But it's not just the chickens that make wing night special.

"It's pretty great to go on a wing night, because you can see basically every regular in one day," says Wilderman. "We see our entire neighborhood on Wednesday."