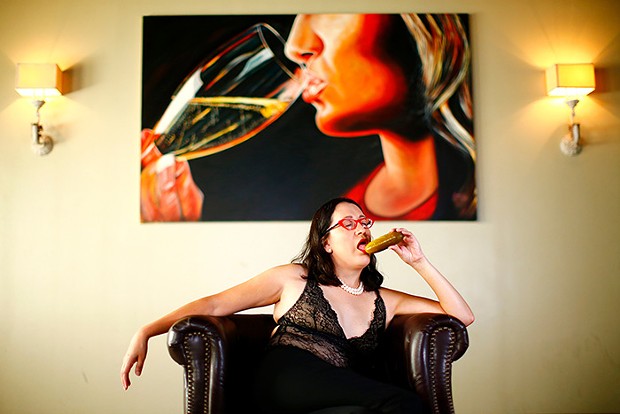 CP Photo: Jared Wickerham
Maria Montaño
Scrolling through Maria Montaño’s Twitter feed yields posts about supporting unions, the cat who has claimed visiting rights to her porch, trans activism, her wife and their newly adopted dog, and loving pickles. The broad assortment of topics paints a well-rounded portrait of this year’s Best of Pittsburgh readers’ choice for Best Thirst Trap.

Montaño has posted a variety of photos that fall into the category of “thirst trap,” which, to her, means a photo posted with the intent to entice or draw someone in, although it is also a way to play with and celebrate her sexuality. Some of her most notable thirst traps came from a photo session she began posting in June 2021, a gift to herself to honor her body and celebrate her journey.

“I think there is a fair amount of playfulness in the photos or videos I share — and offers a glimpse into my life and how I see myself,” Montaño says. “At the end of the day, I think people are drawn to them because they are such an honest reflection of who I am.”

Montaño has continued to share images from that photoshoot, which feature her in lacy black, teal, and pink floral lingerie; her lips, a vivid red that complement her sizable double strand pearl necklace; and, an assortment of stiletto high heels, including a pair in leopard print.

While I was on vacation a couple of weeks ago I did something for myself to honor my body and celebrate my journey. This photo session changed me in ways I can’t begin to put words to - and now I finally see the strong, powerful, sexy, confident, woman I know I am. https://t.co/RUwEPfPEAd pic.twitter.com/Q0TVkpcTYl


While this year’s nomination and voting periods were open, Montaño campaigned heavily for the title across multiple social media platforms, as did many others in Pittsburgh. Ownership of her sexuality and body is particularly important for Montaño because “[b]y owning my own self, my full self — including my sexuality, sensuality, femininity, I am taking back my power from the way capitalism abuses trans women like me.”

Montaño is a vocal socialist and activist for transgender people and sex workers, and works as a campaign communications specialist for Service Employees International Union.

Montaño is also vocal about her love of pickles, which, in addition to being delicious, is a reference to being trans, since hormone replacement therapy can make people crave salty food. Between the salt from the pickles she loves, and the enticing photos she posts, Montaño has mastered the art of thirst.
Maria Montaño. twitter.com/TheMariaMontano